NEW YORK (AdAge.com) -- With 111,000 Lego videos posted on YouTube alone -- including an engaging rap version called "Circle Circle Dot Dot" that has been played more than 10 million times -- there are a lot of grown-up Lego kids out there.

Such plentiful user-generated content posed a challenge for Lego and its plans to celebrate the 30th anniversary of the little yellow Lego minifigure starting Aug. 25. 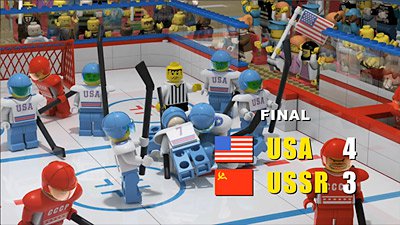 The first spot created by San Francisco agency Pereira & O'Dell as inspiration races through a sequence of big moments from the last 30 years, including the U.S. hockey team's 4-3 victory over the former Soviet Union.

'Too much content'
"Usually a brand tries to convince users to create content, but we had way too much content out there," said P.J. Pereira, founder and creative director of Pereira & O'Dell, a San Francisco agency that opened in April with Lego as a client. "They're doing amazing things, they have a community, so what's left for us to do?"

Plenty, as former Lego kids will find out this week.

"Instead of trying to top them, we came up with the rallying cry "Go Miniman Go" and created a blog for the community, and created the first spot as inspiration," Mr. Pereira said.

That spot is a 60-second sequence of big moments from the last 30 years, starting with "Star Wars" and racing through epic events like the disco movement, break dancing in the subway, the fall of the Berlin Wall and the U.S. hockey team's 4-3 victory over the former Soviet Union. All performed by a cast of thousands of Lego minifigures.

Catering to nostalgia
"Lego fans will go to the site and watch the spot frame by frame," Mr. Pereira said. "Everyone's going to have a favorite scene based on their childhood memories. When you're playing with Lego, you're projecting your dreams on that little piece of plastic."

This week, to promote the blog launch, Lego will send T-shirts to bloggers and invite them to join in. The T-shirts, which can also be ordered from the site for $20, make the wearer look like a Lego minifigure but with his own head. There will also be a contest on Gizmodo, inviting the directors of the three most popular Lego videos on YouTube -- including "Circle Circle Dot Dot" -- to create content for GoMinimanGo.

"We do a lot of this kind of stuff with a child target in mind, so our presence in digital media isn't new, but this is the first time we focus directly on adults who grew up playing with the brand," said Michael McNally, director of brand relations for Lego in North America. "And many of them have kids in the house." He said there are 4 billion of the Lego minifigures in the world, and that they are found in close to 70% of all Lego sets sold.

He said Lego minifigures will also be available in iGoogle wrappers, as the wallpaper on Google users' personal pages. Lego is expected to turn up in new Google applications, given how popular Lego is at Google, where Lego figures are even used in corporate videos. And on the 50th anniversary of the Lego brick recently, Google rebuilt its logo out of Lego bricks on Google.com for the day.

Michael McNally, director of brand relations for Lego in North America, said, 'We do a lot of this kind of stuff with a child target in mind, but this is the first time we focus directly on adults who grew up playing with the brand.'
In addition to digital media, the "Go Miniman Go" video will be shown and T-shirts sold in the only U.S. Lego theme park, located north of San Diego, Mr. McNally said. And the minifigures will be part of a gift-with-purchase promotion at Lego's 23 brand stores in the U.S.

Grow up ... or not
Mr. Pereira said he and his business partner Andrew O'Dell were obsessed with Lego as children. "Andrew was still playing with Lego at 16 and 17, and that was a little bit weird, but now it's cool."

They spent weeks talking about scenes and flow and getting input from other people about key moments in music, sports and history over the last three decades. Having grown up in Rio de Janeiro, Mr. Pereira didn't realize, for instance, that the U.S. beating the USSR at hockey should be included.

Finally, Mr. Pereira showed the video to his 21-month-old son Francisco, who is still a little young for Lego. Already adept at hitting the space bar on his father's computer to restart videos, Francisco watched the video 36 times.