From there, Twitter, Facebook and the blogosphere lit up. But, with the exception of Gap's own Facebook page and a few articles in consumer publications like Time and Forbes, the debate largely seemed to be raging in design and marketing circles -- the chatter skewered the font, Helvetica, and gradiated blue box. The most popular parody account on Twitter, @gaplogo (with more than 3,800 followers at the time of this writing) was peppered with insider references to Peter Arnell and "Mad Men."

By Friday, the debate had certainly crossed into consumer-media territory, with OK magazine asking, "Does the icon matter to you?" NPR, New York Daily News, Washington Post and various local TV stations also jumped into the fray.

With all the hoopla in media and marketing circles surrounding the logo, we couldn't help but wonder: Do consumers actually know there's a new logo? Do they care?

All told, just 17% of consumers were even aware Gap had changed its logo -- some 80% said they had no idea the logo had changed (the remaining 3% said they didn't know what Gap was). Given that, it seems Gap may have had a knee-jerk reaction to the fracas, when on Wednesday night it announced on its Facebook page that it would "like to see other ideas." The retailer said it would be launching a "crowdsourcing project," though no details on that project had been revealed as of press time.

Louise Callagy, a Gap spokeswoman, told Ad Age that the retailer decided it would solicit additional ideas, given the largely negative response to the new logo. "It's impressive, the passionate outpouring from customers," Ms. Callagy said. "We're ready to open it up, take the feedback on board and work together."

Maybe Gap should have done that from the very beginning. More than half of consumers in the Ipsos Observer poll said they expect companies to ask for the public's input before making a major change to its logo, packaging or product. Thirty-six percent said they didn't expect that, while 12% weren't sure.

In the last two years, there have certainly been some notable missteps in the logo and packaging departments at major marketers. Tropicana unveiled a new logo and packaging design in early 2009 and was forced to scrap the changes less than two months later amid consumer outcry and falling sales -- hence the Twitter references to the principal at Arnell Group, which did the design. And, just last week, SunChips said it would stop using biodegradable bags for the bulk of its products after consumers complained the bags were too noisy. Sales of the chips had been declining for months.

So perhaps Gap could have avoided the entire debacle had it consulted with consumers first. Because, whether they knew about the logo change or not, once consumers in the poll saw the new logo, most didn't like it. More than 60% of consumers said they preferred the old logo, while 37% preferred the new logo.

That could prove problematic for Gap, which plans to use the new logo in its upcoming holiday campaign. Twenty-nine percent of consumers said their decision to purchase a company's product would be influenced by a new company logo, while 43% said it would not. The remaining 28% were unsure.

While 29% might be a minority, it's expected to be another competitive holiday season. And, with Gap's sales already soft -- it reported sales at stores open at least a year fell 1% in September -- the retailer can't afford to have anyone shopping the competition because of something as incidental as a logo. 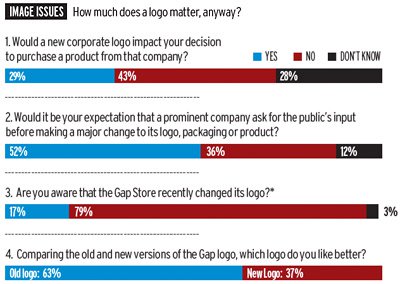