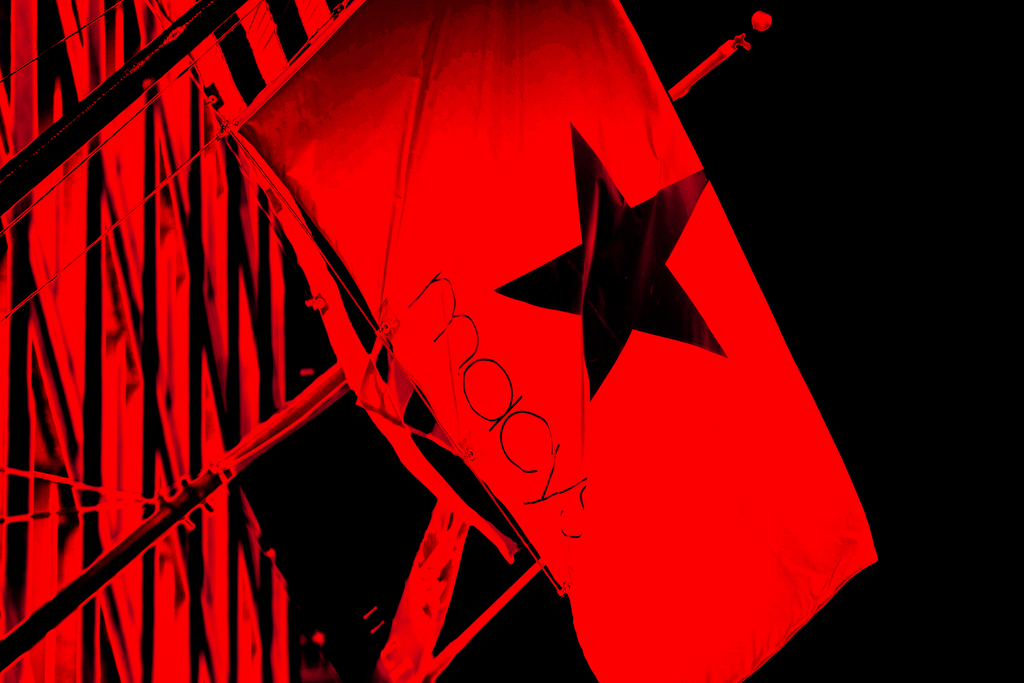 A Macy’s flag flies outside the retailer’s downtown Chicago store.

Macy’s Inc. stock plunged this morning after a worse-than-expected second quarter underscored investor fears that the teetering department store industry is slated for more pain ahead.

The retailer, the first of its peers to report earnings, slashed its profit outlook for the year—and it warned that the cut doesn’t even take into account the next round of Chinese tariffs, some of which will hit as soon as Sept. 1.

The shares fell as much as 17 percent in New York Wednesday. Stocks of rival department stores including Nordstrom Inc. and Kohl’s Corp. also dropped as concerns flared about the overall health of the sector. J.C. Penney releases results Thursday, with other peers coming the following week.

Even before Macy’s reported, department stores showed indications of weakness in the second quarter, Bloomberg Intelligence analyst Poonam Goyal says, citing falling credit card point-of-sale data. “That’s played out with Macy’s,” she says. “I wouldn’t be surprised if J.C. Penney comes out with a weak quarter as well.”

Department stores have been under pressure as competition ramps up from online rivals like Amazon and popular discount retailers like Marshalls and TJ Maxx, both owned by the TJX Companies. They’re also getting squeezed as the Trump administration ratchets up tariffs on Chinese goods. A levy on department store staples such as handbags already went into effect, with the vast majority of other products slated for hikes later this year, even after a partial reprieve.

With new tariffs on everything from apparel to shoes looming, companies are finding themselves hard pressed to give investors confidence that the macro and earnings environment won’t worsen over the next six to 12 months. Macy’s Chief Executive Officer Jeff Gennette said in May if President Donald Trump’s proposed tariffs on $300 billion items from China is enacted, it would hit the retailer’s private and international brands.

At Macy’s, same-store sales for owned as well as licensed stores rose 0.3 percent in the latest quarter, matching analysts’ expectations, according to Consensus Metrix. Even though that marks the seventh consecutive gain, the growth is still anemic compared to big-box store peers. Gennette called out a “slow start to the quarter” that “finished below our expectations.”

While Macy’s is working on its individual strategies to bring people into stores like its experimental Growth50 initiatives, it can’t completely separate itself from the macro geopolitical uncertainties, Grom says.

“I think the consumers are under some stress and they’re having some trouble drawing traffic into their stores,” he says. “You’ve got some big headwinds and that’s why the stock is down.”

Macy’s says it now sees diluted profit in a range of $2.85 to $3.05 per share, excluding some items, down 20 cents—even as it held its sales forecast unchanged. The company blamed too-high inventory levels in the quarter, including “a fashion miss in our key women’s sportswear private brands.”

It also cited a faster decline in international tourism, which often props up its flagship stores. Recent data backs up the retailer’s experience: International visitors to the U.S. spent $17.5 billion in June, according to the Commerce Department. That’s the lowest total in two years, and the 2.9 percent drop from a year earlier was the second-steepest since 2009.

There were some bright spots: Macy’s digital business posted its fortieth consecutive quarter of double-digit growth, it said. The retailer also said its strategic initiatives are “on track to continue delivering sales growth” in the second half.