Marketers Lining Up Athlete Endorsers in Run-Up to Sochi Games

With fewer than 100 days to go before the start of the 2014 Winter Olympics in Sochi, marketers are lining up athletes to tout their brands. 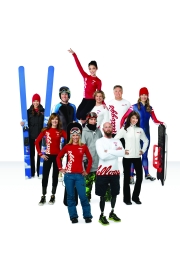 Word on Madison Avenue is that Under Armour endorser Lindsey Vonn is poised to be the face of an ad campaign this fall for the athletic company's "Infrared" cold-weather gear. UA and representatives for the downhill skier declined to comment.

Ms. Vonn, who became the first American woman to win Olympic gold in the downhill at the 2010 Vancouver games, has the most marketing buzz by far heading into next year's Winter Olympics in Russia, said Darcy Bouzeos, president of sports- and entertainment-marketing firm DLB, which identifies and links athletic endorsers with brands.

Olympic TV advertisers love a comeback story, noted Ms. Bouzeos. And the champion skier is bouncing back from not only a serious knee injury but a divorce, and recently admitted that she's battled depression for years.

She's now in a high-profile relationship with golf superstar Tiger Woods. You better believe Ms. Vonn's sponsors hope that romance continues through Sochi. Her other sponsors include Red Bull, Oakley, Rolex and Head.

"She's got the talent, she's got the beauty and she's got the dedication to her sport. Now she has the added human angle interest of: 'Can she come back from her horrific crash and subsequent surgery to win gold?'" said Ms. Bouzeos. "That would be a big story on its own. But now you have the 'Tiger Factor.' That relationship certainly has elevated her notoriety to a bigger, more mainstream audience. She's clearly the one to watch."

Most Olympic sponsors begin pushing their endorsers months in advance. But non-sponsors often take a wait-and-see approach, tracking which Olympians strike a chord with the public once the games get underway.

"The advertisers look for the winners—but they also look for the interesting stories that will connect and resonate with consumers," said Ms. Bouzeos.

Besides Ms. Vonn, here are some other likely hot properties before, during and after the Sochi Games from Feb. 7-23, 2014:

Shaun White, snowboarding
The two-time Winter Olympics gold medalist trails only Ms. Vonn in marketing buzz heading into Sochi. As the most successful action-sports star in the world, Mr. White's so big he dropped Red Bull in 2011. Sponsor GoPro has constructed a private halfpipe for him in Australia to train for Sochi. Mr. White was arrested for public intoxication in 2012, but his brush with the law gives him street cred in the edgy world of action sports. Sponsors: Target, GoPro.

Julia Mancuso, Alpine ski racing
She's in the shadow of Ms. Vonn. But her own gold medal in the giant slalom at the 2006 Olympics and her girl-next-door beauty make her a popular endorser for big marketers, Ms. Bouzeos said. Sponsors: Nike, Visa, Sprint, Spyder, GoPro.

Lolo Jones, bobsled
The Summer Olympics hurdler with fashion-model good looks qualified for Sochi as a bobsledder. She generated headlines by declaring she was a virgin last year. "There aren't too many Summer Olympians who can cross over and compete," said Ms. Bouzeos. Sponsors: Red Bull, Asics, British Petroleum.

Ted Ligety, Alpine ski racer
The 2006 gold medalist has been overshadowed in endorsement deals by skiing teammate Bode Miller. "He's had a great career, is good-looking and top advertisers have already brought him into the fold. He'll probably continue in that vein," said Ms. Bouzeos. Mr. Ligety has already built an impressive team of sponsors, including Coca-Cola, Audi, Putnam Investments and GoPro.

Steve Holcomb, bobsled
The military veteran overcame a degenerative eye disease and depression to win gold at the 2010 Olympics. Mr. Holcomb almost went blind before undergoing a revolutionary treatment called CR-3 that restored his eyesight. He's endorsed by Under Armour.

Noelle Pikus-Pace, skeleton racer
Skeleton racers aren't exactly household names, but with marketers such as Procter & Gamble emphasizing moms in their Olympic marketing, this Mormon mother of two could cash in, said Ms. Bouzeos. Her sponsors include Kellogg's and TD Ameritrade.