Runners have always taken pride in the lack of equipment and technical gear their sport requires. And now many are getting even more basic, fueling the rise of so-called minimal or lightweight footwear that strips out cushioning and structure.

While not for the weekend warrior, lightweight-running products are gaining traction with a broad swath of the population. And marketers are taking notice, flooding the market with major campaigns in an effort to grab a piece of the fast-growing category.

According to SportsOneSource, lightweight products -- loosely defined as shoes that weigh 9 oz. or less in a men's size 9 -- accounted for 28% of the running category in the second quarter. Minimalist styles, a subset of lightweight, accounted for 5% of the running category. Lightweight and minimalist products have been around for years. Nike Free was launched in 2004 and Vibram's FiveFingers shoes (think: gloves for the feet) followed in 2005. The trend has incubated since then. The 2009 book, "Born to Run," which followed a tribe of distance runners in Mexico who run in flat, homemade sandals, is credited with catapulting the discussion to the mainstream.

But Matt Powell, an analyst with SportsOneSource, said that the second quarter marked a turning point, as lightweight products began to cannibalize traditional running categories, such as cushioning and stability. Lightweight products are now on track to hit $1.8 billion in sales this year (compare that to $1.1 billion in sales for athletic shoes' other fast-growing trend, toning shoes). Mr. Powell says the shoes are appealing to both athletes and fashion-conscious consumers attracted by the low profile and more colorful designs. 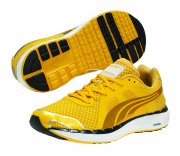 "It's such an important new idea in footwear that in a couple of years, we probably won't be talking about lightweight anymore, because everything will be lightweight," said Mr. Powell. "But right now, everyone is playing the hot hand, so they'll be putting their marketing dollars behind it."

Indeed, Reebok, Asics, Puma and New Balance are putting major marketing dollars behind lightweight or minimalist running styles this year, and those collections will continue to headline efforts into 2012, likely including pushes around the Olympics. Puma and Reebok said they also have plans to ramp up advertising around the products just prior to Black Friday.

Tara McRae, VP-marketing at Puma, said Puma will be launching a lightweight-training product dubbed "Pumagility," supported by a campaign that will include TV buys. "[The space is ] very cluttered, so we have to bring our point of view. You have to start doing things a little bit of -calendar to build some buzz and excitement," she said, acknowledging that Black Friday and the holidays are not typically major marketing periods for performance footwear.

Running will also be the "lead story" for the brand during the Olympics, including a program with Puma athlete Usain Bolt, a Jamaican sprinter and Olympic gold medalist. Faas, Puma's lightweight-running line, gets its name from the Jamaican word for "fast." Puma's agency is Droga 5.

Reebok also plans to dial up ads around the holidays, re-airing TV spots that supported the launch of its ReeFlex lightweight product earlier this year. The campaign, which turns the 76 "sensors" on the bottom of the shoes into animated "running buddies," was created by DDB.

"We hadn't planned to advertise at holiday, but we have to. We've been so successful with Flex," said John Lynch, head of U.S. marketing at Reebok. "We're incrementally investing in the market."

While the average athlete can work a lightweight shoe into their routine without incident, minimalist styles require more education and must be worked into a routine gradually. New Balance, which launched its Minimus collection in March, used 3point5.com, a training portal, to educate store employees, and is running an ad campaign with the tag, "Like barefoot only better." It also has "how to transition" guides at point of purchase. New Balance works with Arnold , Boston.

"Once you've made the transition [to a minimal or lightweight product] it's difficult to go back," said Katherine Petrecca, collection manager for New Balance's minimal line. "What will happen in the more mainstream channels remains to be seen, but in performance and specialty channels, it's here to stay."