A Decade Later, Commercials Are Creeping Into TV Programming Commemorating the Tragedy
READ THIS NEXT
Dodge pays homage to history with EV logo

Ever since the major broadcast and cable-news networks went ad-free following the tragedy of Sept. 11, 2001, the day has continued to carry a stigma for the marketing community, which has largely tried to avoid 9/11-themed specials and documentaries.

Nearly 10 years after the fact, however, a sense has begun to emerge that the event is no longer off-limits, and that advertising and 9/11 memorials and discussion can co-exist. Case in point: AT&T has since July been sponsoring a weekly segment on News Corp.'s Fox News Channel in which anchor Shepard Smith examines the rebuilding and construction of the new World Trade Center site. General Motors' Chevrolet is "presenting" a series about the rebuilding of Ground Zero set to air on Discovery Channel (in the days leading up to 9/11) and Science Channel (in a marathon on 9/11) without traditional commercials. 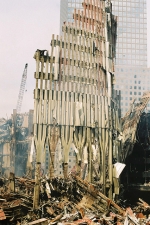 The 10th anniversary of 9/11 will welcome a number of commemorative specials from the networks.

"There is a different tone than in years past," said Harry Keeshan, exec VP-director of investment at Omnicom Group's PHD. "More so than in anniversaries of the past 10 years, there is more of a sentiment to support it or pay tribute to the anniversary than there is to avoid it."

Vacating 9/11-themed airwaves has cost media outlets millions of dollars. According to an analysis done earlier in the decade by TNS Media Intelligence/CMR (now Kantar), broadcast and cable-TV networks lost a combined $313.2 million in ad revenue while they covered Sept. 11, 2001, and its aftermath. On Sept. 11 itself, they lost $84.6 million. In 2002, ad spending on local, network and cable TV totaled $57.8 million on Sept. 11, according to TNS -- a whopping 54.6% cut from the average amount spent in the five weekdays prior to that date.

So if this content was so controversial, wouldn't TV networks keep it out of prime time, where they rake in the most ad dollars? One would assume so. Yet the announcement of a two-hour "Dateline" and a "Children of 9/11" special -- both in prime time on NBC the days before Sept. 11, 2011 -- suggest this sort of content must be gaining traction with marketers. An NBC News spokeswoman did not return an email seeking comment.

CBS, which last broadcast critically praised documentary "9/11" without advertising five years ago, will air an updated version of the program, "9/11: 10 Years Later" that will carry sponsorship. In earlier years, a broadcast of "9/11" was sponsored by a sole marketer, Nextel.

National Geographic Channel is airing a bevy of documentaries and programs in the days leading up to the anniversary. The network will air a seven-program "marathon" on Sept. 11, 2011 -- all of it supported by advertising, said Rich Goldfarb, senior VP-media sales at National Geographic Networks. "One of the centerpieces of our collection of programming is a tonality of remembrance," he said, so advertisers understand the environment shouldn't unduly affect commercials. The outlet has seen strong support for the specials, he said, from automotive marketers, technology firms, financial-services advertisers and telecommunications concerns.

Time Warner 's CNN will air a series of specials about the event and its anniversary, and all will be sponsored by advertising, a network spokeswoman said, except for the debut broadcast of a program produced jointly with corporate siblings HBO and Time magazine. Ads will appear in reruns of the show, however.

Even live news coverage on the anniversary itself is likely to be accompanied by some commercials. Fox News Channel will cover the events of the day with limited commercial interruption, a network spokeswoman said, with some moments running commercial-free. NBC and MSNBC are slated to air three hours of coverage the morning of Sept. 11, 2011, which an MSNBC spokesman said would likely contain ads, but with long stretches between commercial breaks.