There was, as always, no shortage of imbibing opportunities, such as a poolside bash at Caesar's Palace that featured 18 bars with distinct beer lists, or the tradeshow floor, which combined the latest in warehouse-management and bar-neon technology with a sampling of what seems like most of the beers sold in the U.S. (Reporter's note: It's a brutal assignment, but someone had to do it.)

But there was also the urgent business of confronting a very difficult selling year that shows few signs of improving in the fourth quarter. "Last month was a disaster," NBWA President Craig Purser told attendees, before jokingly proposing a beer version of the cash-for-clunkers program. "We've been talking about how great it would be if we could give every consumer $5 to trade in an economy beer for a premium one, but I don't think we could get away with that."

Alcoholic energy brands such as Joose had some of the largest crowds on the tradeshow floor.

Ten things to take away from the event:

1. Joose is loose
Both Anheuser-Busch and MillerCoors swore off the alcoholic-energy drink category under pressure from state governments and watchdog groups during the last two years, but --likely to the big brewers' chagrin -- their wholesalers sure didn't. Alcoholic energy brands such as Joose had some of the largest crowds on the tradeshow floor -- and not just because of the army of busty blondes in fishnets it had staffing the thing. Jakk'd, a concoction of caffeinated grain alcohol, was also seeing long lines of interested wholesalers Wednesday. Jakk'd President Jack Barreca said he is "absolutely interested" in filling the void MillerCoors' Sparks left when it was reformulated to remove caffeine. Asked how he'll avoid the same scrutiny that befell Sparks, he said his marketing would focus on an older demographic. Yes, an older-skewing caffeine-infused grain alcohol. Good luck with that.

2. Taking it in the can ... and loving it
Anheuser-Busch took some flak for its crude anal-sex references in its viral "Can Confessions" video for Bud Light Lime. But A-B isn't stopping there. During a closed meeting Wednesday night, it showed its wholesalers yet another envelope-pushing would-be-viral video, this one a responsibility ad. The setup, this time, likens designated drivers to condoms, with lots of couples discussing how they used one last night and so on. At a reception that followed, A-B President Dave Peacock said 90% of the online chatter concerning "Can Confessions" was positive, a suggestion that, perhaps, critics are being a bit, um, anal.

3. Are imports doomed?
Imported beers have been particularly hard-hit by the economy, and a Tuesday panel discussion focused on the economic and demographic trends savaging brands such as Heineken and Corona. A key question was whether structural changes in the economy -- high unemployment, the flight of many Mexicans and changes in consumer habits -- would permanently impact the sector. "I'm absolutely getting annihilated right now," said Bob Gulley, category manager for the AM/PM convenience store chain. "It makes us weep." But veteran beverage marketing consultant Brian Sudano said there was still hope, and he cited gains by brands such as Stella Artois, Modelo Especial and Dos Equis, as well as the continued surge of craft beers. He said brands can succeed with better marketing and smarter distribution. One reason pricey Stella Artois has fared well amid the recession, he said, is that its focus on being in higher-end accounts gives its "perfection has its price" messaging credibility. 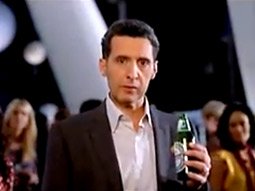 CMO Christian McMahan pleaded for patience from wholesalers for Heineken USA's 'Give Yourself a Good Name' platform.

4. It ain't easy being green
Heineken USA's recent struggles were evident at a Tuesday night bash the importer -- now on its third CEO and fourth lead ad agency in four years -- threw for its wholesalers in the swanky Lavo nightclub inside of the sparkling Palazzo hotel. During a question-and-answer session, executives fielded some tough questions from their distributor council. And CMO Christian McMahan pleaded for patience with Heineken's "Give Yourself a Good Name" campaign, noting the relatively slow build that came with Dos Equis' "Most Interesting Man in the World" effort, which is now regarded as wildly successful.*

5. Strange bedfellows
An unexpected tension point at the conference was the NBWA's embrace of alcohol watchdog groups such as the Marin Institute and Mothers Against Drunk Driving. MADD CEO Chuck Hurley even addressed the convention. Those groups have, at times, been viciously critical of the brewers, but the wholesalers have found them to be a useful partner in advocating for continued state regulation of alcohol, which protects their livelihood. "Some regarded it as a deal with the devil," Mr. Purser said. Former Heineken USA CEO Don Blaustein urged the NBWA to be cautious, saying the alliance could be "dangerous" if pushed too far.

6. Jim Koch, unplugged
The convention's liveliest speech came from Boston Beer CEO Jim Koch, who employed the frankness of, as he described himself, a public company CEO "who owns all the voting shares and can say what I want." Mr. Koch's talk covered a range of industry topics. To point out how profitable the U.S. beer market is, he pointed to the $2 billion in cost cuts currently being inflicted upon A-B. "You can take $2 billion out of what everyone thought was a well-managed company," he said. "Imagine being able to piss away $1 million an hour and still being able to get what you need." He also implored wholesalers to abandon strict franchise agreements that make it difficult for small brewers to choose who distributes their beer, not a popular point in a room full of wholesalers. "I believe in the 21st amendment [abolishing prohibition], but I also believe in the 13th amendment [abolishing slavery]," he said.

7. Beer is good for you
Multiple speakers seized on a recent study that showed moderate drinkers live longer than non-drinkers. That included Mr. Hurley, who told wholesalers that "I was out extending my longevity last night."

8. What would Jesus drink?
In remarks to the conference, outgoing NBWA Chairman Phil Terry took on what he described as inaccurate moral criticisms of the alcohol industry. Citing Jesus' water-into-wine swap at the wedding at Cana, he noted: "When they ran out of wine, did (Jesus) condemn their morality? No, he made more." Amen.

9. Ahem, Mr. Whitacre
The advertising star turn by General Motors Chairman Edward Whitacre in the automaker's newest campaign drew some notice in St. Louis, where Anheuser-Busch executives chuckled as they recalled Mr. Whitacre imploring then-A-B leader August Busch IV not to appear in the company's ads so often. Perhaps Bud Select would have fared better with Mr. Whitacre as its front man?

10. Hope they didn't pay for that
The NBWA got Caesar's Palace to agree to run its "Mr. Beer Guy" music video in a continuous loop on one of the hotel's in-house TV channels for the entire duration of the conference. The 2007 video, which runs a whopping 4:30, sets a beer distributor's day to music. It fell somewhat short of viral, drawing 3,600 YouTube views in two years, a weak number considering there are 2,400 separate beer distributorships with 90,000 employees.

CORRECTION: An earlier version of this story incorrectly stated that Heineken CMO Christian McMahan drew sarcastic cheers when he made a statement about not changing anything on Heineken lager's marketing. Mr. McMahan was referring to Dos Equis, not Heineken.