NEW YORK (AdAge.com) -- Most marketing experts believe tennis star Serena Williams isn't in danger of losing any of her estimated $12 million in annual endorsement deals after her profane outburst at the U.S. Open -- none of her sponsors dropped her, and Nike and Kraft Foods put out a statement of support. But the more intriguing story seems to be the newfound marketing potential of her opponent and the eventual U.S. Open champion, Kim Clijsters. 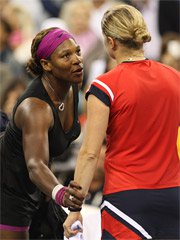 Serena Williams and Kim Clijsters
After being called for a foot fault on Saturday night in her semifinal match against Ms. Clijsters, Ms. Williams went ballistic on a line judge, yelling "I swear to God I'm fucking going to take this fucking ball and shove it down your fucking throat, you hear that?"

The foot fault came at a key moment late in the match and moved Ms. Clijsters to within one point of winning, prompting Ms. Williams' outburst and earning her a code violation that resulted in a one-point penalty, giving Ms. Clijsters the victory. Ms. Clijsters went on to win the U.S. Open title the next day.

Tennis star's deals
Ms. Williams has marketing deals with Nike, Wilson Sporting Goods Co., Hewlett-Packard and Gatorade. She also owns and designs her own clothing line, Aneres. Kraft Foods, which sponsors Ms. Williams through its Oreo Double Stuff Racing League, in which she and sister Venus Williams are pitted against Eli and Peyton Manning, is also standing by her. Company spokesman Basil Maglaris said, "We're glad to see Serena Williams has taken responsibility for her actions and we continue to work with her."

Nike noted that Ms. Williams apologized almost immediately after the outburst and said "she let her emotions get the best of her. Nike stands behind Serena and looks forward to her outstanding career continuing." A Wilson spokeswoman at company headquarters in Chicago declined to comment to AdAge.com; other sponsors could not be reached at press time.

But experts don't fear a backlash. "I tend to think she is in no danger of losing her endorsements," said Robert Boland, clinical assistant professor of Sports Management at New York University. Mr. Boland even referred to an on-court interview conducted by Patrick McEnroe after Ms. Williams teamed with her sister, Venus, to win the U.S. Open women's doubles championship a day after her tirade. Mr. McEnroe asked about the outburst and was booed by the crowd.

"I don't see it having any negative effects on her long-term marketability, though I'd expect her current sponsors may want to limit her visibility until Americans lose interest in this scandal and move on to the next," said Bob Dorfman, executive creative director for San Francisco-based Baker Street Advertising. "It's also possible that this could lead to new endorsement opportunities for her in the same way that Brett Favre's off-season indecision [about retiring] found its way into a Sears ad [in the 30-second spot, Mr. Favre spends hours deciding whether to buy a new TV]. Serena's outburst could become the subject of a campaign for an anti-perspirant, herbal tea, mattress or other product designed to help you stay cool, calm and relaxed."

Opportunities for Clijsters
There might also be big opportunity for Ms. Clijsters. Now 26 years old, the Belgian-born star took two years off from competitive tennis to have a baby, a daughter who is now 18 months old, and she is the first mother in 30 years to win the U.S. Open. That opens the door to a potentially lucrative career playing the role of "working mother" in ad campaigns.

Her London-based manager, John Dolan, told CNBC he has received calls from more than 20 American companies, including a major automaker, about Ms. Clijsters. Mr. Dolan did not respond to an inquiry from Advertising Age at press time.

"I think she has a great story to tell," noted David Carter, principal of the Los Angeles-based Sports Business Group and a sports marketing professor at the University of Southern California. "If Kim can remain competitive in tennis, win titles, and stay on people's radar, she has something that everybody in America and most people around the world can relate to --trying to balance family and work. There's some real opportunity there. That's a story that we haven't seen lately in advertising, if ever, where you can compete at a high level and still be a mom. It comes down to how much charisma she has and whether she can make it resonate."

"She'd make a compelling pitchwoman for Fisher Price, Leap Frog, Target, Wal-Mart, or even her own line of toddler sportswear," Mr. Dorfman said. "Of course, her ultimate marketing success will hinge on her ability to keep winning."