NEW YORK (AdAge.com) -- Here's what the Garden State can expect now that it is poised to become the 14th state to legalize medical marijuana: a bumper crop of cash from taxes, doctor's fees -- and, potentially, marketing.

Marijuana is a $14 billion business in this country, but most of it is from the illegal variety; currently about $1 billion of that is attributable to the legalized medical marijuana industry. An estimated $200 million of that alone is concentrated in California, the first state to pass legalized medical marijuana, in 1996. There are close to 2,000 dispensaries in California and more than 700 in the Los Angeles area alone -- more, as Fortune magazine pointed out, than the combined number of McDonald's and Starbucks in L.A.

Growers sell their weed to "collectives" -- legally required groups put together for the cultivating and manufacturing of medical cannabis for qualified patients. The collectives sell and distribute to dispensaries, and the dispensaries then sell to patients, who first have to get a note from a doctor to purchase the pot.

The state receives tax dollars from the collectives and the dispensaries, doctors advertise their services and earn up to $200 for a "consultation fee," and the average cost of an ounce of the good stuff is $400. One well-known dispensary, Harborside Health Center in Oakland, Calif., will approach $20 million in revenue this year. "One of the interesting things I've seen in the marketplace is a price sensitivity," said John Lee, CEO of Sonoma, Calif.-based PlainView Systems, a marijuana collective. "Everybody can make money in this business without gouging people."

PlainView Systems describes itself as an "online business-to-business exchange for licensed providers of compassionate care medical marijuana products and services as well as a patient-to-licensed grower connection to procure medicine." PlainView markets its services with print ads in newspapers and magazines, online sites such as WeedMaps.com (which offers a Mapquest-like directory of dispensaries near you), Facebook, flyers and word-of-mouth.

Visibility
But why market a product that should pretty much sell itself? "In terms of the marketing, you want to make sure you're viable to your patients," Mr. Lee said. "The dispensaries need to tell people, 'We're here; here are our hours; here are our prices.' I've been in one dispensary where it had flat-screen TVs showing what products were in stock on this day, broken down by grams, eighths, quarter-ounces and their prices."

And yes, there's an app for that. In California, the iPot app bills itself as a "medical marijuana dispensary for the iPhone" that carries 800 listings and ratings.

Then there are marketing communications about the different variety of products available. Just as some prescription medications work better than others, there are varying types of marijuana, from afwreck and green crack to blue dream, snowhaze and purple queen. "People are very adept about what works for them," Mr. Lee said. "You experiment with what works for you. People have this misperception about people who smoke marijuana, and that they're stoners. A lot of them are actually connoisseurs who really know their stuff."

The dispensaries also sell marijuana that does not have to be inhaled, including salves, sprays and, of course, the famous hashish-laced brownies and other baked goods. One upscale Los Angeles dispensary, Farmacy, even employs a pastry chef.

But at least in California, it's not yet a thriving ad category for agencies. "For us, where we are in conservative Orange County, to take on a dispensary would be quite a stigma for us to have to bear," said Mary Blythe, president of Lake Forest, Calif.-based Studio Three Sixty Marketing. "It's not that we wouldn't look into it. I think you'd have to give everybody a fair shot. But there's an entire political arena to navigate, too."

Ad potential
But there are hopes that medical marijuana could buoy marketing in New Jersey, at least eventually. State Assemblyman Reed Gusciora (D-Princeton), who co-sponsored the bill to legalize medical marijuana, said that the first six dispensaries are mandated to be non-profits. "The non-profits will be in the best position to set the price," Mr. Gusciora said. "After that, the dispensaries can be for profit and I can very well envision commercials, much like for Levitra or Claritin, on the airways."

Lou Stancampiano, VP at The Jersey Journal, said there is potential for newspaper revenue from the category "if it moves into distribution of traditional promoters, like chain pharmacies, people who have a tendency to promote. 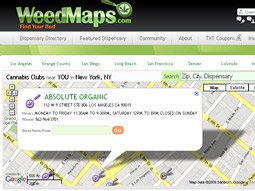 MOST BUZZED-ABOUT: WeedMaps.com helps patients find marijuana dispensaries.
It could even move into holistic or more natural groups who could also become promoters. Hospitals are big advertisers in a lot of markets, so here in Jersey City, if the Jersey City Medical Center was a distributor, it could be a new source of revenue for them and for us."

He added, "I would not discount that as a possibility."

Jim Rothenberg, exec VP-creative director for D&R Advertising, Fort Lee, N.J., said he believes the trickle-down effect will reach the advertising industry in New Jersey and create some revenue. "It definitely will, as everything does eventually. It comes down to the sake of competition," he said. "What media they'll get into, I'm not sure, but I am sure there will be some wonderful creative done."

And the stigma from handling a marijuana collective that gave pause to Ms. Blythe's California shop didn't seem to rattle at least one agency in the home of the "Sopranos" and "Jersey Shore." Asked if he thought there would be a backlash from current clients if his firm took on a collective of a dispensary, D&R's Mr. Rothenberg laughed and said, "There's no stigma about advertising anything."