As General Foods Loses Name in Coffee, a Look Back in Time | Ad Age
Skip to main content

As General Foods Loses Name in Coffee, a Look Back in Time

Maxwell House Loses Its Parent's Moniker but Former Grocery Leader Was Once the No. 2 Advertiser in U.S.
READ THIS NEXT
10 ways to virtually celebrate Martin Luther King, Jr. this holiday weekend

CHICAGO (AdAge.com) -- Can you imagine a food marketer today buying 90 minutes of airtime on every major network for a variety show featuring a heavy dose of advertising? That's what General Foods did back in 1954, when the company was a grocery powerhouse with brands such as Birds Eye, Sanka, Jell-O and Maxwell House in its stable. 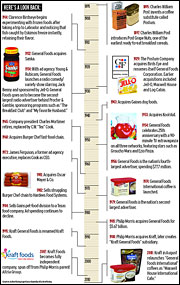 Of course, this onetime major player, whose roots date back to the late 1800s, was subsumed by merger partner Kraft years ago. But the last vestige of its name hung on until a quiet decision late last year to remove the "General Foods" moniker from its line of specialty instant coffees, now called Maxwell House International.

"We wanted to move to a stronger brand that meant more to our consumers," Paula Kaufman, Kraft's brand manager for soluble coffee, told Ad Age in a recent interview. General Foods "had less meaning to our consumers," she added, noting that brand awareness for the name is about 40%, compared with 95% for Maxwell House.

That's quite a fall for a name which as a standalone company in 1979 was the nation's No. 2 advertiser. Of course, the descent began later when General Foods was acquired by Philip Morris in 1985. Kraft, a one-time subsidiary of the tobacco maker, dropped the name General Foods from its corporate title a decade later, but kept the name on the coffee line -- until now.