McDonald's Doubles Down on the Clown

Defends Ronald, Readies Flight of Ads With Him as Centerpiece

In McDonald's eyes, Ronald McDonald can do no wrong -- even though he may not have the appeal he once did. Even as health-care advocates went on their annual attack, McDonald's was in the midst of rolling out about a half-dozen ads by Publicis Groupe 's Leo Burnett with Ronald McDonald as the centerpiece, encouraging kids to visit its Happy Meal website. 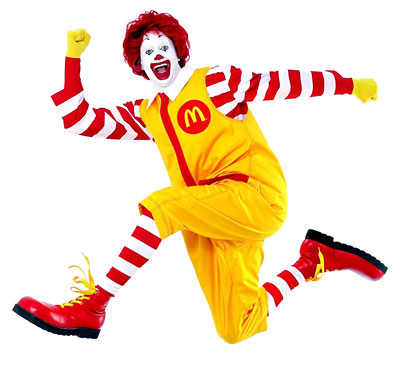 The nearly 50-year-old McDonald's mascot was in the hot seat once again this week, when consumer watchdog group Corporate Accountability International and health professionals took out ads in newspapers asking that the company retire Ronald McDonald and limit marketing to children.

But McDonald's CEO Jim Skinner at the company's annual shareholders meeting did not hesitate to voice the company's stance, saying that "Ronald McDonald is going nowhere." Shareholders agreed, voting down a proposal -- only 6% voted in favor of it -- that would also require McDonald's to report on the impact that public policy and childhood-obesity concerns have on the company's bottom line.

Mr. Skinner added that Ronald McDonald is an "ambassador for good," referencing the clown's support for the Ronald McDonald House charity, which provides housing for families of sick children away from home. McDonald's did not respond to request for comment by press time.

This scenario has the looks of becoming an annual ritual. Around this time last year, CAI launched a website called Retire Ronald, making many of the same demands (and comparing Ronald to Joe Camel). In a statement at that time, McDonald's stood by its mascot.

For the company, Ronald is of historical significance. "What makes him iconic is his recognizability," said John Greening, associate professor at Northwestern University's Medill school of Integrated Marketing Communications, who was also with Omnicom Group's DDB Worldwide, one of McDonald's ad agencies, for 28 years. "He's transcended whatever he was originally meant to do. Icons are very difficult to build and once they're successful they have a lot of equity that you don't discard." He added that sometimes marketers retire company symbols if they become dated, but that Ronald isn't dated and still represents fun.

The mascot is recognized by most people in the U.S. According to the Davie Brown Index, compiled by Omnicom Group's Marketing Arm, Ronald is recognizable by 99% of U.S. consumers. He's fourth in awareness in the company's 2,800 celebrity database. But he's not all that appealing. In terms of likeability, Ronald is ranked 2,109 out of 2,800 celebrities in the Davie Brown Index, among consumers ages 13 and up.

Indeed, in recent years, Ronald hadn't exactly been a strong presence in advertising, relegated instead to the web as well as delivering messages to families about "safety, literacy, and the importance of physical activity." One of his biggest roles in the last decade was and is as "the heart and soul" of Ronald McDonald House Charities.

While the Happy meal website Ronald McDonald will be promoting is not social media like Facebook or Twitter, it could be a risky move for the fast feeder to get kids to interact on the web. "Parents have a very knee-jerk reaction with anything that involves kids in social media. There's a lot of pressure on companies not to advertise on kids. I'm surprised they opened themselves to that ," said Ms. Yohn.

The site features various games and videos for kids. In the upper left-hand corner of the homepage, near the website's logo, is the message: "Hey kids, this is advertising!"