CHICAGO (Crain's) -- McDonald's Corp. plans to soon retire the Big 'N' Tasty and is looking to add oatmeal to its national menu in January, according to a company memo obtained by Crain's. 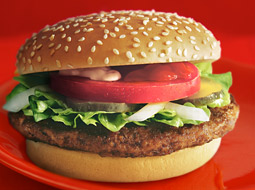 The chain is also slated to replace the Mac Snack Wrap with an Angus Snack Wrap in August and expects to discontinue its fruit and walnut salad once it begins selling oatmeal.

Frappes and smoothies will officially become part of the national menu on July 13, accompanied by a national advertising launch, according to the memo from McDonald's executives to franchisees.

Oak Brook, Ill.-based McDonald's currently is testing maple brown sugar oatmeal topped with apples, raisins and cranberries and blended with cream. The oatmeal has sold for $1.99 in test markets such as Baltimore and Washington D.C.

With the oatmeal launch, McDonald's hopes to take a page out of the playbook of rival Starbucks Corp., which introduced oatmeal in the fall of 2008. It quickly became the Seattle-based coffee chain's top-selling breakfast food.

"Oatmeal is selling well for McDonald's in test markets," said R. J. Hottovy, an analyst in Chicago with Morningstar Inc. "It makes sense to launch it in January, when people will be looking for a warm breakfast."

McDonald's added the Big 'N' Tasty to its national menu in 2001; the burger with lettuce and tomato was the chain's answer to Burger King's Whopper. But the success of the Angus burger, introduced last year, has eclipsed the Big 'N' Tasty, Mr. Hottovy said. The old burger will be taken off the menu Sept. 1, according to the memo.

"The Big 'N' Tasty has been a mainstay of the menu, and it's a bit surprising they are taking it off the menu," Mr. Hottovy said. "But the Angus has been well received."

The one-third-pound Angus burger has exceeded the company's expectations despite tough economic conditions that led many customers to seek cheaper options. McDonald's is selling 50 Angus burgers a day per restaurant, according to sales figures obtained by Crain's earlier this month.

The figures showed strong sales of the new frappe drinks, but weak sales of lattes and cappuccinos.

The figures also demonstrated disappointing results for the Mac Snack Wrap, with the chain only selling 16 per day per restaurant. The Mac Snack Wrap, a Big Mac in a tortilla, will still be available as a promotional item but will be replaced on national menus by Angus Snack Wraps.

McDonald's executives note that sales of the fruit and walnut salad were "low" but said it would remain on the menu until oatmeal is added.

"It's good they are eliminating some menu items and streamlining the operations," said Dick Adams, a franchise consultant. "There are still more slow-moving items they should eliminate."