Is McDonald's Losing That Lovin' Feeling?

Sales Are Soaring, but Its Brand Perception Isn't Keeping Pace
READ THIS NEXT
Judge blocks Trump’s WeChat prohibition order in the U.S.

Most marketers would love to be McDonald's.

It's the world's largest fast feeder by sales. Global same-store sales rose 5.6% last year over 2010 -- its eighth consecutive year of positive same-store sales. It's rated the world's No. 6 brand by Interbrand, with a value of $35.6 billion. It's the 26th-largest advertiser in the country, with a budget of nearly $888 million for U.S. measured media, according to Kantar Media. Indeed, the GoldenArches are a global beacon of success, and the company's 33,000-plus locations in 119 countries serve 68 million people a day.

But something strange is happening on McDonald's soaring arches: Its brand perception isn't keeping pace with sales. According to people close to the company, its internal tracking system finds that McDonald's consistently ranks near the bottom in quality perception when compared with rivals.

The company is working to close the gap, these people said, by addressing issues related to perceptions about its food's quality, sourcing and nutritional value; sustainability practices, including suppliers' treatment of animals; service; and condition of stores.

"The future is going to be so transparent that major corporations should wear underwear that fits," said Scott Bedbury, CEO at Brandstream, who praised McDonald's move. "For any company to ignore what consumers are saying and instead take comfort in their revenue numbers is ill-advised."

Heather Oldani, McDonald's director-U.S. communications, said that though concerned is too strong a word, the company recognizes that "there is an opportunity for us to answer some of the questions that customers may have, that influencers may have, about our menu, our commitments to the community and in the areas of sustainability -- things that frankly we haven't been as vocal about ... in the past.

"We're actually going out there and having a dialogue ... about areas that we are making strides in, and [we] also hear feedback," Ms. Oldani said, citing the "Listening Tour" last summer and outreach to key constituencies such as moms.

Make no mistake: McDonald's does not have a bad brand image. It consistently ranks high on convenience and price in numerous studies.

According to Millward Brown, it's the fourth-most-valuable brand on the planet, with an estimated brand value of $81 billion in 2011, up 23% from 2010. Harris Interactive, which just released its 2012 Reputation Quotient study, gave McDonald's a 71.77, or "good," score.

Jeff Davis, president of Sandelman & Associates, a market-research firm specializing in food-service businesses, said that McDonald's rates high in variety, indulgence, affordability, kid appeal and convenience. But the flip side to those results is that the chain rates weak on taste, quality, healthfulness and friendliness.

A recent Sandelman study gets to the heart of the matter.

It found that what works for McDonald's is a massive system that motivates not only "highly satisfied" customers but many who are highly satisfied with only one aspect, such as breakfast, drive-thru, or value. In other words, even those who aren't "lovin' it" visit McDonald's for one reason or another, such as kid appeal or grab-and-go options. The challenge is to get them to like it for a wider range of things.

Since staging a turnaround early last decade, McDonald's has been ambitiously expanding its menu offerings beyond its traditional staples of burgers, fries and shakes. Innovations include the massive McCafé rollout, updated salads, oatmeal, smoothies and frappés, and a modified Happy Meal with fruit.

Industry experts credit McDonald's for recognizing an opportunity in offering healthful fare, as well as being savvy about owning every part of the day with items such as snack wraps.

Even so, one executive close to the business said that McDonald's is primarily seen as a burger-and-fries chain. 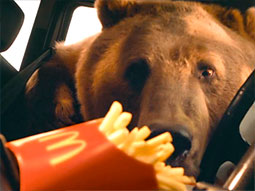 "Until they can [change that view], they're going to have a hard time exponentially growing," the executive said.

McDonald's has also been plugging away with U.S. store remodels, which have a more contemporary look and feel. Many locations are installing TVs and lounge areas to bring more customers inside; drive-thru is estimated at more than two-thirds of the chain's U.S. business. Some have also expanded hours to capture the late-night crowd.

"For a market leader, they've been really aggressive in a pretty fundamental way, but at the same time not losing the core of who McDonald's is ," said Kevin Lane Keller, professor of marketing at the Tuck School of Business at Dartmouth College.

Some of its recent marketing and PR initiatives make it clear that McDonald's is trying to improve perceptions on key fronts -- such as the origins and quality of the food it serves, that a "McJob" puts a worker on a dead-end track or that Happy Meals are bad for kids.

In April, the company sought to add 50,000 employees to its already 600,000-strong U.S. workforce on what it called National Hiring Day. The event was created by Citizen2, an agency whose "approach is based on strategy that is oriented to managing and shaping public opinion," according to its website.

And in July, responding to groups concerned about childhood obesity, McDonald's announced a revamp of the Happy Meal, with fewer fries and more fruit, among other changes.

McDonald's has long been in the hot seat about kids, pressured to stop marketing to them and even to jettison Ronald McDonald. (Publicis Groupe 's Leo Burnett handles Happy Meal marketing.) The chain has repeatedly stood by its clown.

At the annual shareholder meeting last year, CEO Jim Skinner said that the mascot was "an ambassador for good," referring to the Ronald McDonald House Charities.

In January, it started a national campaign created by Omnicom's DDB, Chicago, highlighting suppliers. The ads feature potato, lettuce and beef producers to show consumers some of McDonald's food sources.

"We acknowledge that there are questions about where our food comes from," Neil Golden, McDonald's U.S. chief marketing officer, told Ad Age at the time. "I believe we've got an opportunity to accentuate that part of the story."

"This is a journey," said Ms. Oldani. "I would equate the suppliers' story as maybe the first chapter of that story, and we know that there are other chapters to come [that we] need to continue to share and get feedback on."

McDonald's also said last week that it was working with suppliers to phase out the use of gestation crates, roughly 2-by -7-foot crates that house pregnant sows. This came after the chain confirmed several weeks ago that it had discontinued using so-called pink slime -- beef scraps treated with ammonium hydroxide and put in burger patties.

Late last year, McDonald's dumped one of its suppliers, Sparboe Farms, after reports of unsanitary conditions and animal cruelty.

Ms. Oldani said that while some of its moves have been characterized as reactionary, the company has had relationships with nongovernmental organizations -- including the World Wildlife Fund, Japan Ministry of Environment and the Sustainable Agriculture Initiative -- for 20 years.

Larry Light, president-CEO at Arcature, former McDonald's global CMO and the brain behind the "I'm Lovin' It" campaign, said all companies have "many drivers of trust," including whether the consumer experience has been consistent and whether the brand has met expectations. Integrity is important with any company, and how it treats customers, employees, animals and the environment is a part of that equation, he added.

McDonald's has come a long way back from a low point in the "90s, when it struggled with operational problems, from food quality to store cleanliness. Industry experts say that it was overly focused on expanding its footprint quickly and that employees were not properly trained. It had also lost its marketing message. The chain slashed jobs and closed underperforming locations.

McDonald's brought in Jim Cantalupo and Charlie Bell to lead a turnaround. Mr. Light led the marketing revamp and is widely credited with transforming the way the company goes to market. After two years of overhaul, McDonald's was named Ad Age 's Marketer of the Year for 2004. The stock hit an all-time high of $102 in January, up from $12 in March 2003.

But as long as it sits on top of the category, McDonald's carries the burden of leadership.

"I don't care whether your name is Walmart Stores or McDonald's, the bigger targets attract the attention," said Gary Stibel, founder-CEO of New England Consulting Group. McDonald's has improved its image from "five or six years ago," in part because of menu revisions and value price points, he said. But some of the negative attention was deserved, he added, such as that surrounding supersizing.

McDonald's Quarter Pounder
Morgan Spurlock's documentary "Super Size Me," in which he ate nothing but McDonald's for a month, won an award at the 2004 Sundance Film Festival a month before the company ditched the option. It said at the time that removing the menu had nothing to do with the film.

Marketing and behavioral experts argue that McDonald's has a problem in that liking it carries a stigma in some social circles. One executive close to the business said that customers' opinion about the chain doesn't always correlate with what they do.

"People won't articulate their love of McDonald's, [even though they] really like it -- it serves their needs," the executive said.

"What you observe is a dissonance between people's stated evaluations and their behavior, which is indeed an unstable situation," said Ayelet Fishbach, professor of behavioral science and marketing at the University of Chicago's Booth School of Business.

"Either evaluation or behavior will change," Ms. Fishbach said. "We often observe that changing attitudes is easier than changing behavior, and so McDonald's might decide not to worry too much about attitudes, assuming they'll follow behavior." McDonald's philanthropic efforts could help its overall image, she added.

Though the executive close to McDonald's predicted that attitudes would catch up with behavior eventually, there could be a tipping point at which it goes the other way.