McDonald's: Coffee In Grocery Will Help Sell McCafe in Restaurants

Chain Vows To Improve Service, Speed Especially at Lunchtime
READ THIS NEXT
Tesla is Interbrand’s fastest-growing brand of 2021

McDonald's might be starting to sell its coffee in the grocery aisle next year, but the point is to to drive "greater awareness and sell more coffee in our restaurants," the chain's U.S. Chief Brand and Strategy Officer Kevin Newell said during McDonald's earnings call today, in which the company also noted a chief priority will be improving the customer experience by speeding up service. 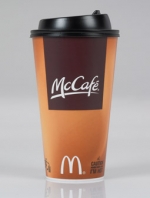 Though the chain declined to say how many markets the McCafe test will run in, it's clearly a major priority for the company -- if not the top priority -- in the U.S.

Mr. Newell said that more than 70% of coffee consumption in the U.S. happens at home, and that the retail test will allow McDonald's to tap into the demand that exists and "highlights how serious we are about elevating McCafe brand potential."

Given the emphasis on coffee, it's highly likely McDonald's will significantly increase its marketing spending on McCafe, though the company didn't provide specifics on how much.

To push its coffee platform forward, the company will eventually roll out more flavored espresso drinks similar to the pumpkin spice latte it introduced this fall. It's likely that tea may be another McCafe priority, as several executives in the investor meeting flagged growing opportunity in that category.

We must improve
Another theme was the need for McDonald's to reinforce "the foundation of people and service, particularly at lunch." Mr. Newell said "customers told us we must improve" in research and surveys the chain conducted.

"Our goal is to deliver a positive moment of truth" when the customer arrives in the store, said Mr. Newell. He noted that "the crew is critical to the effort, since they are the face of the brand," and added that "we are going to focus on improving the overall crew experience to lead to a better customer experience."

To measure its progress, the chain next year will roll out a new customer feedback system to all U.S. restaurants, though executives during the meeting did not elaborate much beyond that.

Industry-watchers might also expect a more measured approach to U.S. product launches from McDonald's next year. U.S. President Jeff Stratton said the chain's big initiatives this year were rolled out too quickly, which resulted in "no time to seed" appropriate platforms. He did not elaborate.