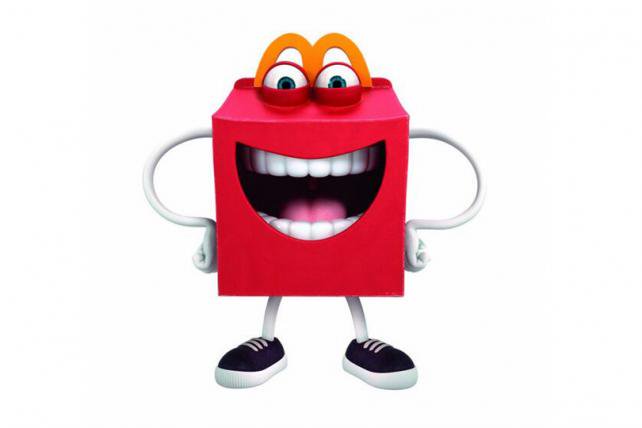 McDonald's unveiled the new character Monday as it also announced a new addition to the Happy Meal menu, yogurt, as a side option. But the new menu item was lost in a burst of Twitter jokes over Happy.

Happy's job, according to a press release, is to "encourage kids to enjoy fruits, vegetables, low-fat dairy and wholesome beverages such as water or juice." The character originated overseas, debuting in France in 2009. He later appeared in Latin America and other European countries, and now will arrive in the U.S. on Friday.

The strawberry-flavored yogurt, which is branded as Yoplait's Go-Gurt, will be available starting July 4. McDonald's version of the product, made exclusively for the chain, has 50 calories, contains 25% less sugar than conventional Go-Gurt and is made "with natural flavor," according to the release. The addition of the yogurt means customers can choose either yogurt or apple slices, or choose both together as their sides in place of a kid-size fry.

It's not clear what role Happy will play in the marketing of Happy Meals, or whether he'll appear in commercials. Ronald McDonalds has had a bit of a resurgence in McDonald's Happy Meal TV spots in the last year or so after a protracted absence in which he was relegated to being a spokesperson for the Ronald McDonald House Charities.

McDonald's announced recently that Ronald McDonald was given a refreshed image and this summer will begin making more of an appearance on social media channels. It's not known at this point whether he'll continue promoting Happy Meals.

As for initial responses about Happy, leave it to Twitter users to give the company snarky, dismissive responses. (Twitter users are reliably hard to please when it comes to mascots.)

@McDonalds THAT! is Scary!

Hey @McDonalds is that Gary Busey?

.@McDonalds Please tell me an unpaid intern designed this, because otherwise, there's no excuse.

.@McDonalds might want to go back to the drawing board, I think I'm going to have nightmares.

.@McDonalds oh, this was a mistake, McDonald's