CHICAGO (AdAge.com) -- From the guys who coined "Meatnormous," introduced the Quad Stacker and unveiled the Double Croissanwich filled with "meat and cheese and cheese and meat," comes ... a diet book.

Cognitive dissonance: Bogusky sees no disconnect between Whopper work and diet book.
Alex Bogusky, one of the chief architects of Burger King's audacious, effective but often gluttony-embracing advertising, has written a tome titled "The 9-Inch Diet," focusing on the need for portion control and the damage done by Americans' lack of discipline in that regard (complete with diagrams of large plates leading to large butts). The book, published by Brooklyn's PowerHouse Books, is already preselling on Amazon, and was written "with a little help from" Chuck Porter, the other name above the door at Crispin Porter & Bogusky, which also handles marketing for pizza giant Domino's.

It's hard to think of a more apparently dissonant moment in the annals of adland. As Ad Age sibling Creativity mused when it broke the story on creativity-online.com, it's hard to imagine Martin Puris, author of "Ultimate Driving Machine," suggesting we should drive less.

So what motivated Mr. Bogusky to write a book on "the twisted conspiracy that's making our country fat"? One ad watcher joked that perhaps it was guilt. "He wanted the title 'Atonement' but discovered it was taken," he said. Others said they thought this would turn out to be a prank, part of an elaborate marketing ruse, perhaps even a way to launch a 9-inch pizza for Domino's. After all, this is the agency that last year created the "Whopper Freakout" by filming what appeared to be real customers being told their favorite item was off the menu, and also created the "Angus Diet," an Atkins spoof for Burger King, which recommended an all-meat regime.

It seems unlikely, however, that the book is designed to do anything for Domino's, given that it appeared in Powerhouse Books' list of coming titles as early as 2006, before Crispin landed the pizza-chain account in September 2007.

'Diet'
The book appears to be entirely serious, and both the agency and Mr. Bogusky insist that it's for real -- and that it in no way conflicts with their fast-food clients' desire to sell pizzas or fries. "The word 'diet' is always used in quotation marks," Mr. Bogusky said of "The 9-Inch Diet" via e-mail. "Specifically, the premise of the book has to do with modifying your portions, not with what you eat." Indeed, Mr. Bogusky claims to have been on his own program, which calls for 9-inch platefuls of whatever you like for a few years. "Yet I love to eat, and I love to eat our clients' food," he wrote. "There is no conflict there."

One senior agency executive at a rival shop said it's just possible that this is Mr. Bogusky's clever way to advance a sentiment that's uttered only behind closed doors in the fast-food industry: that it is too often persecuted for the obesity crisis, when consumers' lack of dietary discipline is the real culprit.

That makes some sense, but there are still those who will argue that pushing portion control still doesn't seem to jibe with, say, peddling one of those Quad Stackers or a triple Whopper with cheese; though easily accommodated by a 9-inch plate, the latter has 1,250 calories and 84 grams of fat. Mr. Bogusky, through spokeswoman Katie Kempner, declined to comment further.

Another question ad-agency execs raised was whether "The 9-Inch Diet," if real, would cause some slimming in Crispin's client roster. The answer, although both Burger King and Domino's appear to have been surprised to hear of the book, would seem to be no.

"We found out about Alex's side project this week," Tim McIntyre, Domino's VP-communications, said in a statement. "He didn't run it past us, and there appears to be no reason for him to. From what we've been told, his book is a satire inspired by the South Beach Diet craze a few years back." Mr. Harville said the book will not affect his company's relationship with Crispin.

Blindsided
Things at Burger King were a little less clear. An executive familiar with the matter said the company had not authorized the book and that most within the company were blindsided when Creativity broke the news of its publication. Spokeswoman Heather Krasnow couldn't be reached for comment.

Burger King is the bigger spender of the two, with $275 million in U.S. measured media during 2007, according to TNS Media Intelligence. Domino's, which Crispin snagged from JWT, spent $132 million. 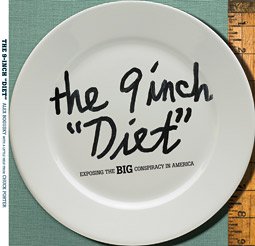 'The word 'diet' is always used in quotation marks,' Mr. Bogusky said of 'The 9-Inch Diet' via e-mail.
"It certainly seems like it should be a big deal to the corporation," said Burger King franchisee Chris Ondrula. "I guess I'd be surprised if the agency didn't take the first step of running it by the corporation." He added that given Crispin's prankish advertising, he was one of those who expected it would turn out to be a hoax.

"The 9-Inch Diet" has been in the works for a couple of years and contains a paragraph in which Mr. Bogusky says that although as an adman he's seen by some consumers as little better than a car salesman, he was involved in the "Truth" anti-smoking effort and the Mini work advocating less guzzling of gas. The copy of the book seen by Ad Age did not, however, contain a disclosure that Mr. Bogusky and co-author Mr. Porter do work for fast-food companies. Updated bios will reflect that in the published copy.

Vote of confidence
Crispin's parent company, MDC Partners, has other big fast-food clients, including Wendy's, at Kirshenbaum Bond & Partners, and Quiznos, at Cliff Freeman & Partners. But MDC's CEO, Miles Nadal, sounded unworried. He said he'll be one of Mr. Bogusky's first customers. "We empower our partners to make their own creative decisions, and we have confidence in their judgment. Even though I haven't seen the book yet, I've pre-ordered 100 copies."

Alejandro Ruelas, CMO and managing partner at LatinWorks, which also works on Domino's, said he, too, was looking forward to purchasing a book. "Alex and his team have a history of doing things that totally break the mold. ... As brilliant and great as they are, I, frankly, more than anything, am intrigued by what's behind the book," he said. "Whatever this is, and what ever debate it ignites, I have no doubt that it's something that's ultimately beneficial to their clients."

~ ~ ~
Creativity's Nick Parish and Jeff Beer contributed to this article.