With Deal, Design-Focused Brand Gets Bigger Foothold in Europe
READ THIS NEXT
Trio of advertising, marketing and publishing vets open media and entertainment company

Design-focused packaged-goods brand Method is being sold by its private-equity backers to Ecover, a European-based rival, in a deal billed as creating the world's largest green-cleaning company with sales of more than $200 million. 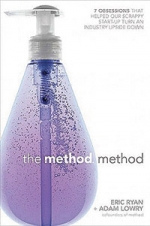 San Francisco Equity Partners today announced the deal, which combines a predominantly U.S.-focused Method with Ecover, whose distribution is primarily in Western Europe.

Method was founded in 2000 by Eric Ryan and Adam Lowry. Mr. Ryan, who has become a popular speaker on the trade-show circuit and co-authored with Mr. Lowry the 2010 book "The Method Method," will retain his role as chief brand architect, a spokeswoman said. Other key players, such as Method CEO Drew Fraser, will also stay with the combined company, and both the Method and Ecover brands will be maintained, she said.

Method made a name for itself by hiring high-end designers such as Andy and Kate Spade and Karim Rashid to work on packaging. Behind its "People Against Dirty" tagline, Method looked to turn its natural-cleaning brand into something of a social movement and had a propensity for lampooning big-name competitors, such as SCJohnson's Scrubbing Bubbles in an ultimately short-lived viral video. Method also was among pioneers in using pop-up stores to market packaged goods.

The sale comes as something of a surprise given speculation that green-cleaning rival Seventh Generation might be sold first. That speculation surfaced after Seventh Generation's private-equity backers last year brought in John Replogle, a veteran of Burt's Bees who previously oversaw the sale and integration of that company into Clorox Co. But Mr. Replogle said last year that Seventh Generation is backed by "patient capital" and in no hurry to sell.

Ecover, founded in 1980 with manufacturing facilities in Belgium and France, gives Method a platform to expand the brand more rapidly there.

Method had sales of more than $84 million in U.S. food, drug and mass outlets for the 52 weeks ended April 15, according to SymphonyIRI, but those data don't include e-commerce, which accounts for about 20% of the green-cleaning business, according to industry players.