Got Milk? Not anymore. The Milk Processor Education Program is sidelining the iconic ad slogan in favor of a new tagline, "Milk Life," which puts emphasis on milk's nutritional benefits, including its protein content. 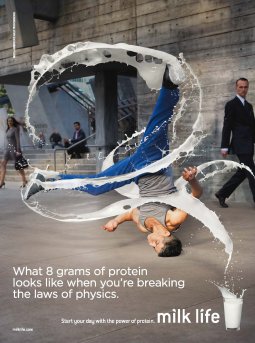 The change is part of a national campaign launching Monday that seeks to return the sluggish dairy milk category to growth. The national milk industry had been using the "Got Milk?" tagline since 1995 when the phrase was licensed from the California Milk Processor board. The state group began using the tagline in 1993 after it was created by Goodby, Silverstein & Partners.

The California processors, which are still with Goodby, are keeping the tagline, which is one of the most recognizable and parodied phrases in advertising.

But the national group, whose agency is Lowe Campbell Ewald, New York, is moving in another direction as it looks to boost milk sales, which are suffering as other beverages gain ground and cereal sales stall. Euromonitor International recently estimated that drinking-milk retail sales volume declined by about 1% last year.

"Got Milk has very high awareness," said Sal Taibi, president at Lowe Cambell Ewald, New York. "But we have a new strategy. We have a new message and we just felt we needed a new approach."

The national group, known as MilkPEP, plans to spend more than $50 million on the campaign, which will include TV, print, digital, retail promotions and PR. One TV ad visually depicts liquid milk powering consumers through activities like running, playing basketball or playing in a rock band.

A print ad shows a young woman playing an electric guitar and is captioned: "What 8 grams of protein looks like when you unleash your inner rock star." That refers to the amount of protein in an 8-ounce glass of milk.

Protein is "really in the news and on consumer's minds," said Julia Kadison, interim CEO of MilkPEP. "But a lot of people don't know that milk has protein, so it was very important to make that connection between milk and protein."

The organization began making the transition in recent months with "protein fight club" ads that positioned milk against other alternatives, like omelettes, which are depicted as being messier. MilkPEP will continue to license the "Got Milk" phrase, but the organization is "not 100% clear on what role it will play," Ms. Kadison said.

The nutritional pitch is a very different positioning from the original concept that spurred the creation of "Got Milk," which was to dramatize situations in which consumers suffer without milk to accompany foods like cake and cookies. One of the original ads created for the California group showed a man who failed a radio contest quiz question -- "Who shot Alexander Hamilton?" -- because he lacked milk to clear his mouth after munching on a peanut butter sandwich.

In a 1994 interview with The New York Times, Jeff Goodby suggested that consumers had reacted negatively to milk's traditional nutritional messaging, which had been touted with the "Milk does a body good" line. "It reminds them of why they didn't want to drink it in the first place," Mr. Goodby told the Times.

The national group, conversely, is zeroing in on mornings, which Ms. Kadison said accounts for about 50% of milk consumption. Consumers tend to "back-load their day with protein," she said. "So it's a really nice story to say … you need to get plenty of protein in the morning, too, because it helps you power through the day."

But the group will be fighting consumer headwinds that have made dairy milk less relevant at sunrise. "Americans in decades past may have had a bowl of breakfast cereal with cow's milk in the mornings," Euromonitor stated in a report. "Now, consumers are skipping breakfast, picking up a breakfast sandwich at a fast food restaurant, or eating yogurt or energy and nutrition snack bars instead."

The milk industry might soon get a giant assist from the cereal industry. Kellogg Co. is planning a new "masterbrand" campaign that will include elements of plugging milk and cereal together as a combination that "provides a very, very strong protein benefit," Michael Allen, Kellogg's president for its U.S. Morning Foods division, told investors last week at the Consumer Analyst Group of New York annual meeting. For its part, MilkPEP plans to focus on milk from a glass, which it says accounts for 57% of volume.

The marketing investment comes as cow's milk is battling newly aggressive non-dairy milk brands. The Silk brand, which makes almond and soy milk, is running a new campaign by Leo Burnett that plugs its plant-based milks as having "delicious taste that is better than dairy milk." The effort features a new animated character that Silk execs internally refer to as "Phil." That is a reference to chlorophyll, which is the green pigment found in plants.

The campaign is designed to move Silk beyond its "perceived barriers," which have traditionally included taste, said Blaine McPeak, North American president of WhiteWave, which is Silk's parent company. The almond variety, which surpassed soy last year as Silk's top offering, has helped overcome the taste perception issues, he said. Almonds are more "familiar" to consumers and "nutty sounds really, really delicious," he said.

On its website, Silk touts its plant-based milks as having more calcium and fewer calories than dairy skim milk. Cow's milk has the advantage of having more protein than almond milk. But Silk is trying to close that gap with a new variety of "protein + fiber" almond milk that it says has 5 grams of protein per 8-ounce serving.

But while plant-based milks are growing, cow's milk still dominates, with $14.4 billion in North American sales in 2013, compared with $1.6 billion for non-dairy milk, according to Euromonitor International.