CHICAGO (AdAge.com) -- Here's the latest twist in the super-low calorie beer wars: MillerCoors is coming out with a lemon version of MGD 64 to fend off a mounting challenge from Anheuser-Busch's Bud Select 55. 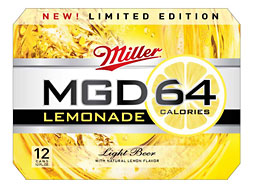 MGD 64 Lemonade -- billed as "64 calories of crisp, refreshing beer with a lemonade twist" -- will debut in May as a limited edition offering, as part a larger effort to boost the 64 brand with more marketing support.

"We're upping the ante and pushing harder as we go into 2011," said Sharon McLenahan, MillerCoors' senior director for heritage brands.

After a successful launch in late 2008, MGD 64 has lost ground, with sales slipping 11% to 5.7 million cases in the year ended Jan. 2, according to SymphonyIRI, which excludes liquor stores, club stores and Walmart. In the last 13 weeks, sales have dropped 20%, reported Beer Marketer's Insights. Bud Select 55, which has nine fewer calories and is billed as the "Lightest Beer in the World," was rolled out nationally last February and was plugged with a Super Bowl ad. With nearly 4.8 million cases sold in the year ended Jan. 3, the brand is now nipping at MGD 64's heels.

"MGD 64 got a real nice introduction, Bud Select 55 responded, round and round we go," said Benj Steinman, president of Beer Marketer's Insights. Adding lemon is an "attempt to reinvigorate a brand that gave them a good pop in 2009 and struggled a bit in 2010," he said.

On the beverage spectrum, the new brew is somewhere between Miller Chill -- the beer with a hint of lime -- and flavored malt beverages by other companies such as Mikes Hard Lemonade, which are sweeter and have less of a beer taste.

MGD Lemonade is classified as a "flavored beer" not a flavored malt beverage because it "maintains the brewed characteristics of MGD 64, with the complementary flavor of lemonade, [which is] not [the] defining flavor," according to MillerCoors. Some flavored malt beverages have come under fire from public health advocates who say the beverages are marketed to underage drinkers.

MillerCoors pointed out that their new product will not be available in single-serve containers -- another concern of advocates -- but only be sold in 6- and 12-packs. The target market is 24- to 34-year-olds and skews more female than heavier beers, the brewer said.

"This is a consumer that is very health aware ... but loves their beer," Ms. McLenahan said.

The beer will be sold through Labor Day, the brewer told wholesalers in a message Friday.

Ms. McLenahan declined to give specifics on the new marketing for MGD 64 other than to say it will be a "significant increase" from last year's spending and that new commercials will debut in February. Measured media spending on MGD 64 in the first 10 months of 2010 was $18.7 million, and for all of 2009 was $29 million, according to Kantar Media. The ad agency for the brand is Publicis Groupe's Saatchi & Saatchi, New York.