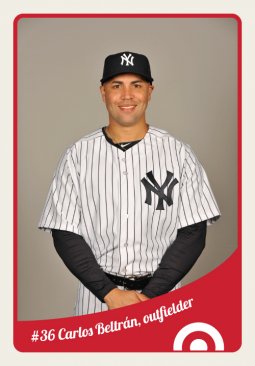 Target signed a 25-year naming rights deal to put its bullseye logo on the new home of the Minnesota Twins in 2008. The retailer operates more than 1,900 stores in the U.S. and Canada.

"Target is iconic in retailing in the U.S. -- which is one of the reasons they're so attractive to us," said Mr. Brosnan. "But they're really hyper-iconic in the Minneapolis-St. Paul marketplace. In this day and age, it's hard to find major metropolitan areas that are so closely associated with an individual corporate partner."

Entering the new season, MLB is in good shape marketing-wise, according to Mr. Brosan. Besides Target, baseball's marketing team is close to signing one or two other new corporate sponsors in time for Opening Day on March 31.

This season will also mark the beginning of MLB's new $12.4 billion, eight-year TV contracts with Fox, ESPN and Turner Sports. Despite the economic recession, Mr. Brosnan said ESPN boss John Skipper told him that ad sales were running strong in advance of the season.

For Target, an alignment with the Grand Old Game is one way to shift some attention from the ongoing data scandal that's shaken both the company and its customers. Beth Jacob, Target's former head of technology, stepped down last week.

Target is planning a variety of marketing activities to promote its relationship with the Midsummer Classic, which will be televised by Fox on July 15. The retailer has signed deals with Carlos Beltran of the New York Yankees and Adrian Gonzalez of the Los Angeles Dodgers.

Target will offer consumers an expanded offering of MLB/All-Star Game merchandise at Target.com during the spring and summer. Together, Target, MLB and People magazine will launch a national "All-Star Teachers" program to celebrate the country's best teachers.

"With the 2014 All-Star Game coming to Target Field and our hometown of Minneapolis this summer, working with Major League Baseball seemed like a perfect fit," said Dan Griffis, Target's VP-marketing, in a statement.