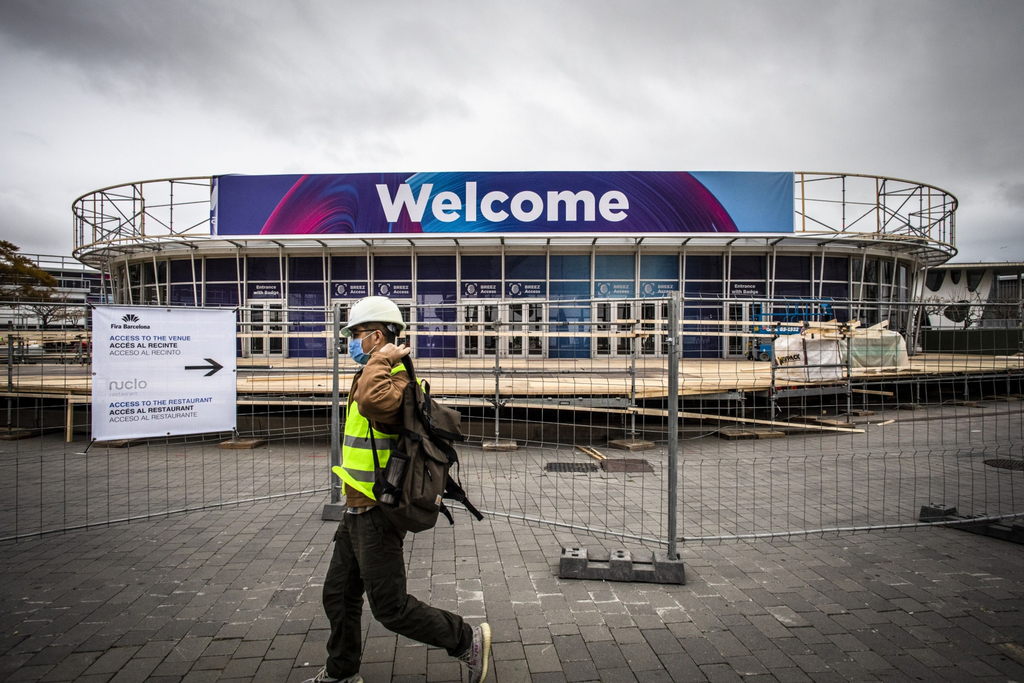 A worker wearing a protective face mask walks past the entrance to the Fira Gran Via venue for the Mobile World Congress in Barcelona, Spain, on Wednesday, Feb. 12, 2020.

The wireless industry scrapped its biggest annual showcase after the coronavirus outbreak sparked an exodus of participants, roiling telecom companies just as they’re preparing to roll out new 5G services.

It’s the first time in MWC Barcelona’s 33-year history that organizers have called off the event, which draws more than 100,000 participants from across the world to check out the latest innovations, pitch to investors and do deals.

“The global concern regarding the coronavirus outbreak, travel concern and other circumstances, make it impossible” to hold the event, John Hoffman, chief executive officer of conference organizer GSMA, said in a statement to Bloomberg News.

The list of big-name attendees started to crumble on Feb. 7, when Swedish wireless equipment maker Ericsson AB pulled out, saying it couldn’t ensure the safety of staff and customers. As others pulled the plug—from Sony Corp. to Nokia Oyj, Vodafone Group Plc and Deutsche Telekom AG—it became harder for those remaining to justify their presence.

As of Tuesday, the death toll in China from the virus rose to 1,113, and confirmed cases on the mainland have reached 44,653.

MWC was due to run from Feb. 24 to Feb. 27. GSMA had stepped up sanitary precautions to reassure visitors -- advising against handshakes, introducing body temperature scanners and a protocol for changing microphones, and restricting entry to recent arrivals from China.​ Some delegations had replaced Chinese staff with colleagues from other countries or sent their China representatives ahead of time to avoid being barred.

The decision to scrap it entirely was a difficult one, and it’s not clear who will shoulder the costs—the participants or GSMA. The industry’s biggest players often spend tens of millions of dollars to exhibit at the show. Ericsson’s absence alone left a gap bigger than a standard American football field in the conference halls.

GSMA funds much of its budget from the event, charging 799 euros ($872) for a basic admissions pass.

This year was supposed to see the big launch for fifth-generation mobile services that debuted last year. The smartphone industry is trying to fire up stalled growth with the promise of higher data speeds and faster responsiveness. Smartphone shipments have been declining since 2016.

MWC is also important to the city of Barcelona, as well as to many of the smaller companies that wouldn’t otherwise have access to such a large audience of mobile carriers and consumers. Large national contingents from Turkey to South Korea take to the show to encourage deal-making and inward investment.

The regional government of Catalonia had been in touch with the conference organizers and said it saw no need to cancel events like MWC, Alba Verges, head of the Catalan government health department, said at a press conference in Barcelona.

South Korea’s LG Electronics Inc. was among the first to rethink its participation, pointing out last week that most health experts had advised against “needlessly” exposing hundreds of employees to international travel.