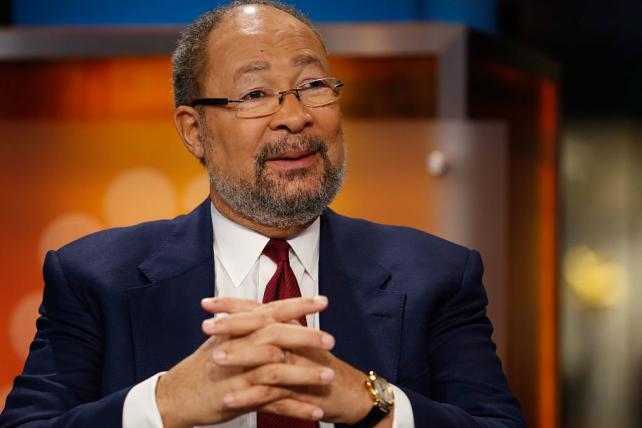 What people are talking about today: Richard Parsons, interim chairman of CBS Corp., is stepping down for health reasons after less than a month on the job, the company says. He took on the role after sexual misconduct allegations toppled CBS's longtime chairman and CEO, Les Moonves. Parsons' replacement is Strauss Zelnick, CEO and chairman of Take-Two Interactive Software.
Parsons, the former CEO of Time Warner, is also departing CBS's board. In a CBS statement, Parsons said he has been dealing with multiple myeloma and felt the situation was manageable when he took the role. "Unfortunately, unanticipated complications have created additional new challenges, and my doctors have advised that cutting back on my current commitments is essential to my overall recovery," he wrote.
As The New York Times says, "The shake-up complicates an already difficult time for CBS."

Masters of Marketing
The Association of National Advertisers is having its big annual conference starting Wednesday in Orlando, Florida, with some 3,000 execs expected to attend the 2018 Masters of Marketing event. As Ad Age's E.J. Schultz, Jack Neff and Adrianne Pasquarelli write:

"Data privacy legislation is sweeping the world, and the FBI is now involved in a criminal investigation into agency media-buying practices. In short, there's a lot to talk about …"

What to pack: The weather Wednesday in Orlando will be cloudy with a high of 83 degrees, and rain is forecast later in the week, The Weather Channel says. So don't forget the umbrella.

Boo
To mark Halloween, the Oct. 22 issue of Ad Age is "The Scary Issue." We asked execs from across advertising, marketing, tech and media what terrifies them. The full list is worth reading, but here's a very brief sampling:
Andrea Brimmer, chief marketing and public relations officer, Ally Financial: "My biggest fear is inadvertently getting caught in a political firestorm. It could be something you don't even do, but your brand ends up dragged into. It's a different world we live in—it's so divided right now."
Lee Newman, CEO, MullenLowe U.S.: "Complacency, climate change, automatic weapons, Alabama's offense, 'Fortnite' and Kanye."

Cindy Gallop, founder, IfWeRanTheWorld.com: "I'm scared that the Harvey Weinsteins of our industry think they've gotten away with it and will carry on doing it."

No thanks
Comedian and actress Amy Schumer says she's not interested in appearing in Super Bowl ads; it's her way of showing solidarity with Colin Kaepernick, the former NFL quarterback who led the player protests against racial injustice. "I personally told my reps I wouldn't do a Super Bowl commercial this year," she wrote Friday on Instagram. "I know it must sound like a privilege ass sacrifice but it's all i got. Hitting the nfl with the advertisers is the only way to really hurt them." Schumer, who was in a Bud Lite Super Bowl ad with Seth Rogen back in 2016, also said she thought white players should join the protests. "Why not kneel next to your brothers?" she wrote. "Otherwise how are you not complicit?" Kaepernick, a Nike endorser, has filed a legal case accusing the National Football League of colluding to keep him out of the league because of his activism. Read more on ABCNews.com.

Just briefly:
Security shopping: Amid concerns about how Facebook safeguards user data, the company wants to buy a cybersecurity firm and has approached several about a possible acquisition, The Information reports.

'Mansize': "Kleenex is rebranding its 'Mansize' tissues amid cries of sexism from consumers," USA Today reports. The new name is Kleenex Extra Large.

Sweet spot: Ad Age's Jessica Wohl looks at how candy makers are trying to redefine impulse buying in the Amazon era. One idea: Letting people buy snacks when they're in a Lyft or an Uber.

Nah: Starbucks has no interest in selling cannabis in Canada, where recreational marijuana is now legal. "That's not anything we're considering or pursuing," CEO Kevin Johnson tells Bloomberg News.

Headline of the day: "Sociologists are using the Bachelorettes' Instagram posts to study modern femininity," from Quartzy.

Top 5: Ford's ad starring Bryan Cranston playing a host of characters, including a robot, is on the Creativity Top 5; check out the other picks from Ann-Christine Diaz and Max Sternlicht.

Ad of the day: Nike's new "Just Do it" ad, timed for three-time NBA champion LeBron James' first home game with the Los Angeles Lakers, looks back at when he was 18, "just a small-town kid with big-city dreams." The soundtrack is "People Get Ready" by the late Aretha Franklin, an unexpected choice that works. Watch the spot here.