Mattel's Got a Monster Holiday Hit, but Will Franchise Have Staying Power? | Ad Age
Skip to main content
Sign In Register

Mattel's Got a Monster Holiday Hit, but Will Franchise Have Staying Power?

Monster High 'Transmedia' Play Expands Beyond Dolls to Merchandise, Apparel and Entertainment
READ THIS NEXT
Peloton agrees to a costly recall, and Trump's Facebook account is in limbo: Thursday Wake-Up Call

The newest doll in Mattel's hot Monster High line has "not lasted on the shelf more than 21 minutes," said TimeToPlayMag.com editor-in-chief Jim Silver. In fact, Mattel has stopped selling the dolls -- its first original franchise since Hot Wheels in 1968 -- on its website anymore, and a spokeswoman said the company is "producing everything we can." Scarcity has driven up prices from original suggested retail of $16.99 to well over $40 on eBay and Amazon.

Monster High, a line of teen dolls from the makers of Barbie packaged as the children of famous monsters like Dracula and Frankenstein, have names like Draculaura and Frankie Stein, a "Twilight" twist, hip street fashions and complicated backstories. 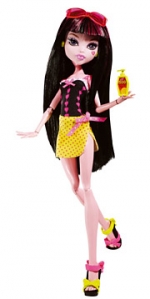 Draculaura, for instance, is a vegan who faints at the sight of blood.

But for Mattel, this is just the beginning. Monster High is intended to be a much bigger franchise than dolls -- it's a transmedia play that extends to merchandise, apparel and entertainment.

The brand, introduced in July, includes merchandise and entertainment ranging from Monster High-branded clothing at Justice (now out of stock, although a new line of branded clothing and accessories will arrive in January, the Mattel spokeswoman said); cosmetics, jewelry, and dolls at Claire's; Halloween costumes at Party City; a music video and webisode series online with a dedicated YouTube channel; a chapter book for teens, written by popular teen author Lisi Harrison ("The Clique" and "The Alphas" series); a Halloween TV special on Nickelodeon, and coming in 2012, a full-length live-action musical movie to be produced by the same team behind "Hairspray" and "Chicago." Macy's will join as a partner in January with its own exclusive Monster High T-shirts.

While the strategy and marketing has been carefully crafted over more than three years to reach tween and teen girls, it's also a unique and potentially risky ploy.

Take media, for example. With the exception of one TV special, the animated "shows" are series of 90-second webisodes only available online. Traditional advertising has been small as well, with one TV commercial at launch in this fall (no longer on air) and a smattering of fourth-quarter print in tween-targeted pubs including Seventeen and Tiger Beat magazines. WPP's Y&R is the agency.

"Monster High is working. The new business model is reaching teens where they live, congregate, play and interact with their friends in the digital media space," said Reyne Rice, toy trend expert for the Toy Industry Association. This is a "trans-media storytelling model, since it did not start with a traditional entertainment property first."

The tween and teen audience Mattel is targeting already seem to get it. "We've heard girls talk about the shows, but we said 'wait a minute, there aren't any shows.' But regardless of whether it's on TV or on an iPad in the backseat of the car, it's a show to them," said Wynne Tyree, president of Smarty Pants, a youth and family research and brand consultancy.

Mattel wouldn't say how much it has invested in Monster High, but analysts peg the figure at easily millions of dollars, reflecting its importance for the company.

And Mattel already has some validation of Monster High's success. In its fiscal third quarter ending in September, it reported that worldwide sales of "other" doll brands, that is, those other than Barbie, were up 7% over last year, "driven primarily by strong performance of the Disney Princess doll line and the introduction of the Monster High doll line," according to a press release. Overall, Mattel's girls and boys brand business was up 8% year-over-year, with $1.17 billion in sales.

There has been some grumbling on the blogs that Mattel may have stoked the scarcity by under-producing. But Tim Kilpin, general manager, Mattel Brands, in a statement attributed the shortage to "the brand's popularity and retailers managing their inventory tightly ... We manufactured as much Monster High toys as we could to meet forecasted demand."

While Mattel has certainly tapped into the current trend of vampire and monster chic, will Monster High be able to sustain the heat?

"Mattel has believed in it from the very beginning," Mr. Silver said. "They saw kids' reaction early and felt they had a hit. ... I'd call it a calculated risk. A lot of time, money and effort have gone into Monster High. Something like this can last only a few years, no one can predict if it will go on for 10 or 20 years -- but it absolutely could."