Will Movie Turn GI Joe Into Soldier of Fortune?

LOS ANGELES (AdAge.com) -- GI Joe is a real American hero -- and that might be a bit of problem for both Paramount Pictures and Hasbro. 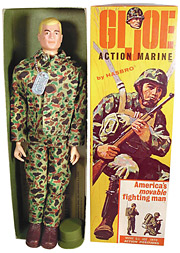 GI Joe: Americas movable fighting man.
Their relationship would appear to be on extremely solid footing: Paramount and Hasbro are both riding high this summer, enjoying the $633 million global box-office haul of the toy maker's smash hit, "Transformers." But now, efforts to turn Hasbro's GI Joe into a motion picture are proving particularly fraught.

Deciding whether to make "GI Joe" at all, let alone how to market it, is nettlesome thanks in large measure to an unpopular American president defending an unpopular war: In a July USA Today/Gallup poll, a record high of 62% respondents had called the invasion of Iraq "a mistake."A month later, that view is 57%, more or less where it's been for over a year.

Overseas, the view is even more dire. "Not only is there worldwide support for a withdrawal of U.S. troops from Iraq, but there also is considerable opposition to U.S. and NATO operations in Afghanistan," the Pew Global Attitudes Project found in June. So the prospect of sending more soldiers -- albeit celluloid ones -- is a complicated task at best. "There are always challenges," said Brian Goldner, Hasbro's chief operating officer. "GI Joe is not just a brand that represents the military; it also represents great characters."

Two competing scripts
In the early 1970s, with America in a Vietnamese quagmire, Hasbro sought to play down the war theme that initially defined GI Joe. The line was rebranded "The Adventures of GI Joe," and Joe was cast as the leader of the "Adventure Team." Sales flagged, and Hasbro shut down domestic production of the line in 1978, only to relaunch it in 1982 as counterterrorist forces fighting a spectral terror organization called Cobra.

Now that Paramount has again teamed with producer Lorenzo di Bonaventura, who produced "Transformers" for the studio, the question is: Which GI Joe will Paramount and Hasbro go with?

There are two competing scripts in development at Paramount. The latest comes from screenwriter Skip Woods, best known for writing the thriller "Swordfish," the other, from the team of David Elliot and Paul Lovett, who last penned Paramount's sleeper action hit "Four Brothers," which Mr. di Bonaventura also produced.

Mr. Elliot and Mr. Lovett's script is said to be evocative of the less-overtly militaristic version of GI Joe. A person familiar with both scripts describing theirs as "sort of an 'X-men' meets 'Mission: Impossible' -- like GI Joe force."

No decisions made
Mr. Woods' script is more akin to GI Joe circa 1997, when Hasbro's Classic Collection featured more realistic military hardware and weaponry and a more patriotic theme -- and presumably, therefore, a more problematic marketing plan. It's said to include a character called "Action Man," a nod to the title GI Joe used in overseas markets. Mr. Goldner said the film might be marketed as GI Joe in the States and Action Man overseas but no decisions has been made.

A spokeswoman for Mr. di Bonaventura would not comment on the picture's development. Rob Moore, Paramount's president-worldwide marketing and distribution, said, "Until there's a [locked] script, I don't think you can really comment on what the international reaction will be. In 'Bourne Ultimatum,' you have the story of what is essentially an American spy. But the characterization of the military and the CIA is: They're the bad guys. In any event, there are parts of the world where it's an issue, like Western Europe, and parts where it isn't, like the U.K., Australia and Asia."

But Mr. Goldner said Hasbro is sensitive to the current world climate. "We'll weigh our options. Clearly we do a lot of work on consumer insight."