Scandalous Celebs Get Endorsements -- Overseas
READ THIS NEXT
Jeff Bezos’s wealth soars to $171.6 billion to top pre-divorce record
Lindsey Lohan managed to escape a harsh jail sentence, but her film career might be on hold for a while.
Credit: Infusla

The term "movie jail" is taking on an entirely different meaning for Hollywood and for Madison Avenue.

Lindsey Lohan managed to escape a harsh jail sentence, but her film career might be on hold for a while.
Credit:
Infusla
Usually a term of derision for a director whose last picture bombed, "movie jail" has become the literal provenance of celebs. Paris Hilton was locked up; Nicole Ritchie's knocked up. After two drunken-driving arrests in the past four months, Lindsay Lohan last week reached a cushy misdemeanor plea deal that will put her in jail for just 24 hours, a whopping 22 hours longer than Ms. Ritchie's 84-minute stint in L.A. county jail. Britney Spears drifts in and out of the Promises rehab facility, and though so far she's been proved guilty of nothing more than bad taste in matters follicular and sartorial, most stories about her are nonetheless filed under the heading "Train Wrecks" at TMZ.com.

Never mind caring for Sean Preston; can a "Britney" be trusted with your brand? Will Madison Avenue "always have Paris"?

'Problem children'
"It's hurting me here," said Ryan Schinman, president of New York-based Platinum Rye, referring to the domestic business of the world's top provider of celebrity talent and music licensing for Fortune 500 companies and ad agencies. "There's less of a demand for, let us say, the 'problem children' than there's ever been. You schedule a shoot, and they're in jail. Or they can't leave the house."

But that's not to say Mr. Schinman isn't doing brisk business with coterie of enfants terrible overseas. Paris Hilton recently became the spokesmodel for Italy's Damiani jewelry -- a deal Mr. Schinman confirms as true, but declined to discuss, citing rigorous confidentiality agreements for all his celeb clients. He also notes a recent deal that put supermodel Naomi Campbell, who in January pleaded guilty to assaulting her maid with a cellphone, into a rich new endorsement pact in Russia.

"They don't get Perez Hilton over in Japan," laughed Mr. Schinman. "And while we're just getting used to the TMZs and US Weeklys, the tabloids in Britain have been that way since ever."

Blowing off embarrassments
After losing most of her contracts after being photographed allegedly sniffing rails of cocaine, Kate Moss rebounded to earn $9 million last year (mainly for brands running European campaigns), making her the second-highest paid model on the planet.

But in the States, William Morris Agency's co-head of celebrity endorsements, Brian Dubin, predicts the wave of celeb scandals and their substantial downside "will affect the type of personality who gets to endorse or build a celebrity brand."

It appears that it already has -- at least at Beverly Hills, Calif.-based Brand Sense Partners, which last August formed a strategic partnership with William Morris. Its president, Ramez Toubassy, said the raft of celeb bad behavior isn't just affecting who'll do the endorsing; it's also affecting what kinds of products are increasingly available for endorsement in America.

Said Mr.Toubassy, "No question, given what's been happening, we're becoming very careful about who we sign. We're looking for stable careers, stable reputations." 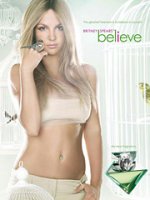 Britney Spears' scents sell despite image woes.
The shift in growth, experts believe, is as much literal as it is metaphorical.

According to Marshall Cohen, a retail analyst at NPD Group who specializes in following celebrity-branded products, "We're going to move from the bedroom to 'bathroom and kitchen.'"

Say what you will about Ms. Spears, but she continues to sell perfume. Her "Curious" and "Fantasy" colognes distributed by Elizabeth Arden have generated over $450 million in sales. Mr. Toubassy says Arden will launch a third, as-yet-unnamed fragrance early next year, noting that over the past 24 months, Ms. Spears' scents have sold more than $300 million globally.

Regardless of the aroma of scandal that clings to Ms. Spears, Mr. Toubassy explains, "Once it's in use, no one knows what perfume you're wearing."