If English Soccer Can Take in $155M From Sponsored Jerseys, What About NBA, NFL? | Ad Age
Skip to main content
Sign In Register

If English Soccer Can Take in $155M From Sponsored Jerseys, What About NBA, NFL?

Mark Cuban: Ads on Uniforms a Matter of 'How Much' Not 'If'
READ THIS NEXT
Zoom juries, digital networking, and 'deep dives' into the work: Lions Chair Philip Thomas on what to expect at virtual Cannes

NEW YORK (AdAge.com) -- It was just a small blurb in Sports Illustrated magazine's "By the Numbers" section two weeks ago: "$155 million -- Income generated by the 20 English Premier League soccer teams this season by selling ad space on their jerseys." 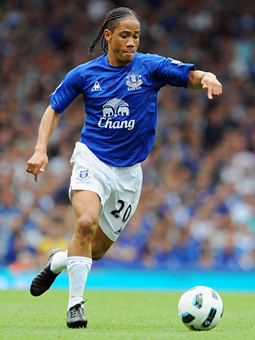 English Premier League soccer teams sold ad space on jerseys to the tune of $155 million this season.
Credit:
AP
But those 21 words are causing the four major American sports leagues, its corporate partners and even fans to rethink the idea of sponsor patches on team uniforms.

"It's definitely on the horizon," Mark Cuban, owner of the National Basketball Association's Dallas Mavericks, said in an exchange of e-mails with Advertising Age. "I think it's more an issue of 'how much' rather than 'if' [it happens]."

If the English Premier League can generate $155 million, imagine what the National Football League or the NBA can do. Those are the two sports leagues that have already dipped their respective toes into the sponsorship-on-jerseys debate.

The NBA has been the most aggressive in pushing the agenda, hence Mr. Cuban's opinion that it could be sooner than later for sponsor patches. The league-backed NBA Development League and its Women's National Basketball Association (WNBA) both allow teams to sell jersey sponsorships. That exposure has even led some brands not normally associated with sports marketing to put its patch on the coveted uniform. Microsoft, for instance, placed its Bing search engine logo on the front of the WNBA's Seattle Storm's jerseys.

"We are always watching the WNBA and the NBA Development League to see what works and what may be an applicable business practice, and we fully recognize that the presence of corporate branding on game uniforms is a widely accepted practice on the global sports landscape, particularly in soccer," NBA spokesman Mike Bass said. "That being said, the value proposition to include branding on the NBA game uniforms has not yet presented itself."

Mr. Cuban agreed, saying "Find me a multi-year deal at $10 million or more per year and I will make it happen."

The NFL allows teams to sell advertising on practice jerseys, and more than half of the 32 franchises have already done so. The New York Jets signed a deal last year with Atlantic Health to sponsor their practice jerseys as well as their New Jersey-based practice facility. According to Joyce Julius & Associations, an Ann Arbor, Mich.-based company that evaluates sports sponsorships, Atlantic Health received nearly $200,000 in free exposure during HBO's four-week telecast of its popular "Hard Knocks" series, which chronicles an NFL team each summer during training camp.

"We are approached annually by major companies who say that NFL jerseys represent the most valuable real estate in sports and inquire about placement of their logos," NFL spokesman Brian McCarthy said. "But we do not have any plans to do so with game jerseys."

Parity would be an issue, of course. While that $155 million for the 20 English Premier League teams sounds great, the disparity between the top teams and the bottom is wide, just as it likely would be in American sports between franchises in New York and, say, San Jose or Oklahoma City. The EPL's two biggest clubs, Liverpool and Manchester United, take up 40% of that ad revenue -- $31 million a year for Liverpool's deal with British financial services company Standard Chartered, and $30 million annually for Man-U's agreement with insurance carrier Aon. Seven clubs in the EPL earn less than $1 million annually for shirt sponsorship deals.

This isn't a recent issue, either. As leagues and teams have struggled to find new sources of revenue, the idea of putting sponsor patches on uniforms has simmered on the back burner, with an occasional switch to a front burner boil.

In 2004, MLB tried to put the logo for the film "Spider-Man 2" on the bases as a promotion tool for the film, until a public outcry over the sanctity of the game and the field forced the league to rethink that decision.

As far back as 1999, Howard Smith, then VP-marketing for MLB, told The New York Times that the league was "talking from A to Z about our on-field programs, and bringing in additional sponsors in other formats than we have now. We've talked about everything. But we're not close to anything."

And they're still not.

In a statement emailed to Advertising Age, an MLB spokesman wrote: "Baseball has a longstanding policy of not allowing corporate advertising on our uniforms for non-international competitions. We are continuing to monitor what appears to be an increase in the trend that places non-manufacturer corporate marks on uniforms."