Plus, a 'funny, slightly sad marketing faux-pas' involving a Disney movie
READ THIS NEXT
Salesforce agrees to buy software maker Slack for $27.7 billion 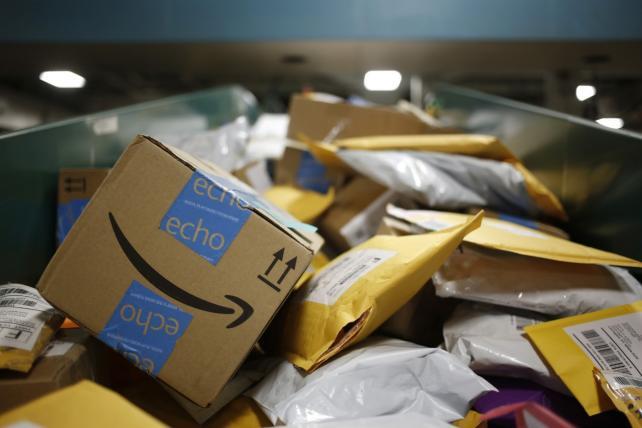 What people are talking about today
Martha Stewart taught us how to set our tables, bake pies and grow kitchen herb gardens; now she's getting interested in another type of herb. Stewart, 77, will advise the world's biggest cannabis company, Canopy Growth, on products for people and pets, Bloomberg News reports. The company says she'll focus on products made with CBD, the cannabis compound that's said to relax you without messing with your head.

In case you're wondering: Is the 77-year-old grande dame of homemaking a stoner like her friend Snoop Dogg? No, apparently. Last year, in an interview about the VH1 cooking show she hosts with Snoop Dogg, she told The Hollywood Reporter: "I'm not a smoker myself, but the smoke is quite thick around the set."

Fakes
Counterfeit products are a big problem for Amazon, and the company has come up with an unusual solution -- it's putting more onus on brand owners to help fix the problem. The Wall Street Journal writes that Amazon is "starting to let brand owners delete listings on its site for products they deem fake, marking a sharp shift in its struggle to fight counterfeiters that cedes some of its responsibility to other companies."

Amazon says in a blog post that it wants to tap the "sophisticated knowledge that brands have of their own intellectual property and how best to detect counterfeits of their products." Project Zero also involves using AI to detect fakes and scannable codes to authenticate products going into warehouses. About 15 brands have been testing the program already, The Journal says. For everyone else, there's a waitlist.

Brand safety, again
YouTube says it will disable comments on many videos of children and teenagers -- a response to reports that pedophiles were congregating in the comments sections, leaving messages for each other there and sharing links to child pornography. Arguably, it's something the Google-owned video platform could have done earlier. Some brands including AT&T and Disney have paused their ad spend on YouTube because of the problem. YouTube's move this week to disable comments wasn't an instant solution to marketers' brand safety concerns. As Ad Age's Garett Sloane writes, "many brands are still withholding ad dollars until they see even more progress being made to stop all the objectionable activity on the platform."

Shake-up
Now that AT&T's acquisition of Time Warner is really, truly final, some leadership changes are afoot at the company's media brands. Ad Age's Jeanine Poggi writes that Turner President David Levy is leaving the company, with sources saying an official announcement will be made this morning. Meanwhile, over at HBO, influential Chairman and CEO Richard Plepler also is stepping down after 27 years, news reports say. Poggi writes:

"These moves come as WarnerMedia—as AT&T rechristened Time Warner—considers changes that could include combining HBO and Turner. On Wednesday, reports surfaced that former NBC Entertainment Chairman Bob Greenblatt is being considered for a role overseeing both entities."

So what exactly is WarnerMedia going to look like when the phone company is in charge? We're about to find out.

Just briefly:
Goodbye: Gap Inc. is spinning off Old Navy, the most successful brand in its portfolio, and analysts are cheering the move. Read more on Bloomberg News.

It's back: After eight years, Ford is bringing Ranger pickup trucks back to the U.S., E.J. Schultz writes in Ad Age. And it's got a campaign called "Tough Has More Fun," featuring 15 adventure athletes.

Black History Month: As February's commemorations of black history wrapped up, Saturday Morning co-founder Geoff Edwards shared a selection of ads and brand ideas that effectively highlighted African-Americans over the years. Cheerios is on the list, and so is Barbie. Read it on Ad Age.

Bots: Ad Age's Simon Dumenco has some thoughts about the new FedEx SameDay Bot, a delivery robot, and the marketing for it. The convoluted tagline is: "The future. What we deliver. By delivering." Dumenco writes, "That's convincing—along the lines of 'Death. What comes after living. For all who are alive.'"

Gaffe of the day: Disney's "Ralph Breaks the Internet" did not win the Academy Award for Best Animated Feature Film. But someone prepared promotional materials in hopes that it would, and at least a couple Best Buys hung up signs promoting the movie as an Oscar winner next to Blu-rays of the movie. Screenwriter C. Robert Cargill was the first to notice the gaffe and posted a photo of it on Twitter, where it's been going viral. It's not the biggest screw-up ever; it's just a "funny, slightly sad marketing faux-pas," as Fast Company writes. The movie that won -- for real -- was "Spider-Man: Into the Spider-Verse."

Brand joke of the day: