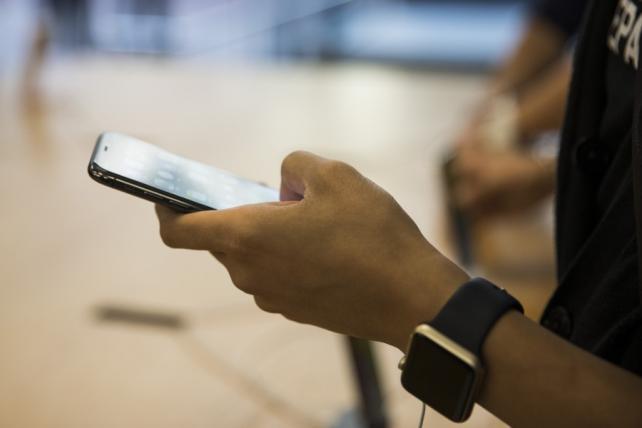 Apple is grappling with a FaceTime eavesdropping bug -- and a PR crisis.
Credit: Justin Chin/Bloomberg

What people are talking about today
Apple, which constantly touts its commitment to user privacy, is grappling with an eavesdropping bug on its video- and audio-calling service. "The bug lets you call anyone with FaceTime, and immediately hear the audio coming from their phone — before the person on the other end has accepted or rejected the incoming call," 9to5Mac reports. Apple temporarily disabled a feature associated with the bug and said it would correct the problem in a software update this week, the report says.

For Apple, this is a major PR crisis -- amplified by the fact that it has cast itself as a protector of users' privacy and shamed other tech companies for their problems on that front. Remember just a few weeks ago at CES in Las Vegas, when Apple put up a huge billboard promising that "what happens on your iPhone, stays on your iPhone"? Photos of that outdoor ad are being re-circulated over social media with snide comments attached. Such as, "Apple's CES ad certainly aged well."

Pre-game peek
There are five days left until the Super Bowl, but you can get a head start and watch the eight commercials that have already been released, as compiled by Ad Age's E.J. Schultz. Here they are. And keep this link handy, since it will be updated.
Random observation No. 1: Two of these ads nod to the subculture of ASMR, whose devotees say that whispers and rustling or tapping sounds make them feel tingly and relaxed. Michelob Ultra's organic beer is going full-on ASMR in a far-out spot featuring Zoe Kravitz whispering in a mountain valley. And Pepsi's spot seems to subtly nod to Cardi B's enthusiasm for ASMR by showing her tapping her long nails on a soda can. (And by the way, those nails are fabulously on-brand, shellacked in Pepsi's signature red and blue.)
Random observation No. 2: Two different brands feature robot creatures who are disappointed that they can't partake in human pleasures. A smart speaker whines about not being able to taste Pringles, while a humanoid robot longs for a sip of beer in a spot from Michelob Ultra's main brand.
In other Super Bowl news: President Trump will do an interview with CBS to air on Super Bowl Sunday ahead of the game, CNN reports. Last year, when the big game was on NBC, Trump declined.

'Into thin air'
Everyone knows that ratings are in decline at TV networks as younger viewers cozy up with Netflix and other streaming options. But Ad Age's Anthony Crupi zeroed in on a stunning number from Nielsen that shows the scope of the drop. Comparing the C3 ratings from the fourth quarter of 2018 to the comparable period two years ago, Crupi writes that ABC, CBS, NBC and Fox "have seen more than one-quarter (27 percent) of their demographically desirable viewers vanish into thin air." And he points out a disconnect: Despite it all, ad revenue at the Big Four networks is still rising.
Also: Fox's broadcast of the musical "Rent" -- which was supposed to be live and then wasn't -- "delivered the lowest ratings for a broadcast musical in television history," Crupi writes.

Just briefly:
The Supreme Court of Facebook?: Facebook put out a brief draft charter announcing a huge project -- a board of independent experts to help judge what user content is unacceptable. Ad Age's Garett Sloane writes that it's "an attempt to separate the platform from the thornier content questions that have put it under the microscope as it navigates policies on hate speech, bullying, nudity and other sensitive subjects."

More on Facebook: After updates to how much data Facebook allows third parties to access, non-profit journalism platform ProPublica says Facebook "has made it impossible to collect information about how political ads get targeted to different people," Garett Sloane writes.

What?: Snapchat, which built its brand on the concept of disappearing photos and videos, is weighing changes "that could make users' public posts longer lasting or even permanent," Reuters reports, citing unnamed sources.

Chevy + Lego: A Lego version of the 2019 Chevrolet Silverado will appear in "The Lego Movie 2: The Second Part," Ad Age's E.J. Schultz writes. There's an ad, too, starring the movie's characters.

Spoof ads of the day: A laugh-til-you-cry Twitter thread pokes fun at Peloton's strategy for marketing its stationary bikes with photos of people exercising in their luxury homes. Sample photo caption: "Last year we painstakingly remodeled a midcentury modern house in the hills, including furniture from the period. Then I put my Peloton bike right in the middle of the living room."

Ad of the day: Instead of running a Super Bowl ad, Skittles is doing a short Broadway musical on Sunday starring Michael C. Hall. Based on a behind-the-scenes video, it seems "the whole production may be a big middle finger to advertising," Ad Age's Ann-Christine Diaz writes. It's also kind of deep. "What the show really attempts to explore is the role of commercialism in America and the blurring lines of entertainment and marketing," says Ari Weiss, Chief Creative Officer of DDB North America, who also is a producer on the show. Check it out here.