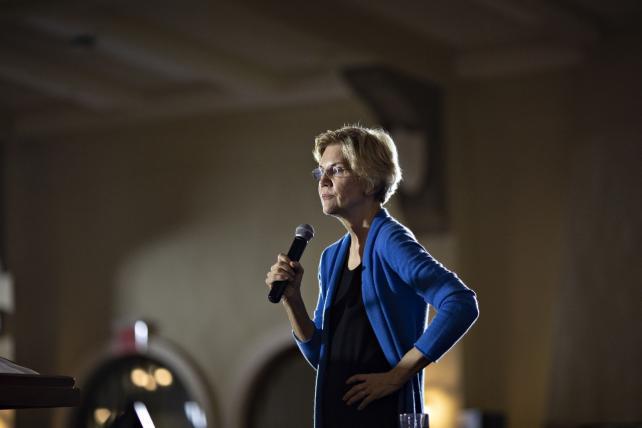 What people are talking about today
Presidential candidate Sen. Elizabeth Warren says Google, Amazon and Facebook have gotten too powerful, and she wants to break up Big Tech. So when the Democrat ran ads on Facebook to explain her plan, what happened? Facebook reportedly removed a few of the ads (oops), then reinstated them when Politico noticed what happened. Politico spoke to a Facebook spokesperson who said:

"We removed the ads because they violated our policies against use of our corporate logo. In the interest of allowing robust debate, we are restoring the ads."

To recap: Facebook quickly acknowledged the issue and changed course, but the story blew up anyway. It's a reminder of how much scrutiny Facebook's ad platform is under, something that will only intensify leading to the 2020 election.

Warren's tweet: "Curious why I think FB has too much power?" Warren tweeted. "Let's start with their ability to shut down a debate over whether FB has too much power. Thanks for restoring my posts. But I want a social media marketplace that isn't dominated by a single censor. #BreakUpBigTech."

If you can't say something nice
It's all the rage right now: Using ads to bash or belittle your competitors. The latest example comes from Sprint, which says rival AT&T is engaging in false advertising by calling its wireless offering 5G Evolution. Sprint is already suing AT&T over the issue, and in The New York Times' Sunday edition this past weekend, it took out a full-page ad as an open letter to customers, Ars Technica writes. Sprint's ad read:

"Don't be fooled. 5G Evolution isn't new or true 5G. It is fake 5G. They would love for you to believe they are different... better. The truth is AT&T is simply offering customers a nationwide 4G LTE network just like Sprint and all the other major wireless carriers. It's not 5G."

Bud Light did something similar with its Super Bowl commercials trashing its MillerCoors rivals for using corn syrup. More recently, Clif Bar took out New York Times ads pointing out that rival Kind Snacks doesn't use organic ingredients and challenging it to change.

What's with all the negative energy, people? Do we really need that in 2019?

Speaking of those Bud Light ads
Bob Lachky is a former Anheuser Busch marketer who was behind some great Budweiser campaigns of the past, including "Whassup" and "Budweiser Frogs." He's not a fan of Bud Light's Super Bowl ads mocking MillerCoors' light beers for using corn syrup. In Ad Age's new Marketer's Brief podcast, he tells E.J. Schultz that Bud Light's ads started "discussions about ingredients that nobody cares about. It's just real disappointing. It's a total miss." With AB InBev and MillerCoors locked in a debate about ingredients, they're "talking to each other and not talking to the consumer," he says.

Just briefly:
Happy 30th: The World Wide Web is 30 years old today. Google has a funny doodle in its honor that shows a retro computer hooked up to a website, via a modem cable plugged into the wall.

Smarter TV ads: "Yet another consortium is forming among TV companies—this time to establish standards in addressable advertising," or ads that get sent to smart TVs in individual households, Ad Age's Jeanine Poggi reports. It's called Project OAR, and so far its members include NBC Universal, CBS, Disney Media Networks and more.

Mark your calendar: Apple is hosting an event March 25, and it's expected to announce details on its highly awaited streaming and media subscription offerings, Wired reports.

What we're watching: Graphic designer James Verdesoto offers up a fascinating explanation of the psychology of movie posters, including the use of colors to create moods, in a video from Vanity Fair. Ad Age's Simon Dumenco calls it "a mini master class in design-meets-marketing." Check it out here.

Number of the day: At least 33 advertisers have stopped advertising on Tucker Carlson's Fox News show in recent months after the host's controversial comments, Business Insider reports. Others are expected to follow suit after old misogynistic recordings of Carlson came to light. On Monday, Media Matters unearthed more recordings from the same show ("Bubba the Love Sponge") that used white nationalist rhetoric and racist remarks.

Ad of the day: Reebok's new work is called "Sport the Unexpected." And yes, it's very unexpected. The ad from Venables Bell & Partners features some quirky random dance moves in an unexpected location. "The campaign is part of a broader effort by Reebok to reclaim its late '80s, early '90s-era heyday when its chunky kicks were worn by the differentiated likes of Jane Fonda, Stevie Wonder and John Gotti," Ad Age's Adrianne Pasquarelli writes. Check it out here.