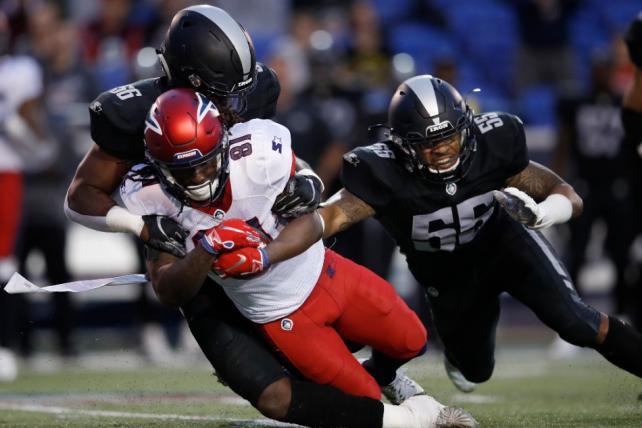 When the Alliance of American Football debuted, CEO Charlie Ebersol dreamed of building "something meaningful and long-term." The fun lasted just eight weeks. Now the pro league is suspending operations after its lead investor walked away. "Carolina Hurricanes owner Tom Dundon, who in February pledged to invest $250 million in the upstart spring football league, is pulling out of his commitment after paying out some $70 million," Ad Age's Anthony Crupi writes. The AAF shutdown is happening with a few weeks to go before the season was supposed to end April 27. As Crupi writes, that means CBS, TNT and NFL Network have some airtime to fill.

AT&T's ad unit, Xandr, is crashing the TV networks' party. It's making a "formal pitch to marketers during the TV upfront week that's typically dedicated to major broadcast and cable networks," Ad Age's Jeanine Poggi writes. Xandr's May 14 presentation to marketers won't be showy, compared to the celeb-filled fests that some networks offer. "Buyers don't need the jazz hands," Brian Lesser, Xandr's CEO, tells Poggi. Instead Xandr's event will be "full of people talking about how data can be applied to TV and how they can extend their budgets into digital formats," Lesser says. It sounds … studious. Walt Disney Co. has an upfront the same day, and maybe it will offer up something more lighthearted.
By the way: Ad Age has a calendar for the upfronts, and it's here.

There's an ad for that

Binge-watchers: Hulu is reflecting on how to make special ad experiences for people like you. "We know if someone watched the first, second, third episode in a row, they're binging," Peter Naylor, Hulu's head of ad sales, tells Ad Age's Garett Sloane. "That's an opportunity to create some kind of binge advertising." We don't know what the streaming service's potential offering might look like yet, but maybe sponsors of binge-watching sessions "could offer a commercial to a viewer in exchange for lighter ad loads in upcoming episodes, for example," Sloane writes. The goal is to make commercials less obtrusive. (Presumably the new ads won't do anything to remind us we're binge-watching? People probably don't want to think about all the hours they're losing to old episodes of "South Park.")

'Unable or unwilling to act'

Users, parents and brands have been worried about YouTube spreading videos filled with violence, conspiracy theories and other toxic content. An exhaustive new report from Bloomberg News says YouTube employees have been concerned, too, warning the company repeatedly. But "Susan Wojcicki and other YouTube executives were either unable or unwilling to act on internal warnings about extreme and misleading videos because they were too focused on increasing viewing time and other measures of engagement," Bloomberg says in a summary of the report. Of course, more viewing leads to more ad dollars.
YouTube's response: A spokeswoman told Bloomberg that the company has spent two years focused on finding solutions for its content problems.

Itsy-bitsy influencers: Vox profiles parents who have turned their tots into social media influencers for streetwear. One dad "swears there will never be a moment when a free turquoise windbreaker is more important than his son's happiness." Good to know.

Lawsuits galore: Lately, "MillerCoors, Sprint and Clorox have bypassed the industry's self-regulation system and gone straight to court to file false advertising lawsuits against competitors," and Ad Age's E.J. Schultz looks at why that's happening in this week's edition of the Marketer's Brief podcast. His guest is Linda Goldstein, an advertising lawyer and partner at BakerHostetler.

Snake oil no more: "Neuromarketing has gone from the realm of intriguing experiments with questionable merit among market researchers to an everyday tool for many brands," Ad Age's Jack Neff writes.

Publisher's Brief: Simon Dumenco is out with his latest Publisher's Brief for Ad Age, including a look at Elle's unusual (but interesting) social media promotion of its Taylor Swift cover.

Ads of the day: HBO''s "Game of Thrones" is entering its final season, and brands want in on the buzz. Mtn Dew lined up Migos and other celebs to cut a remix of the series' theme song, Ad Age's E.J. Schultz writes. And there are 'Game of Thrones' Oreos too, along with an excellent homage to the show's soaring trailer. As Ad Age's Olivia Raimonde writes, it involves an animated landscape of castles built with more than 2,750 Oreo cookies. Agency 360i and Elastic, the company behind the "Game of Thrones" titles, worked on it (and surely enjoyed themselves doing it.) Watch it here.