Amazon's CEO accused the National Enquirer of trying to extort him
READ THIS NEXT
Facebook considers banning political ads in the lead-up to the U.S. election 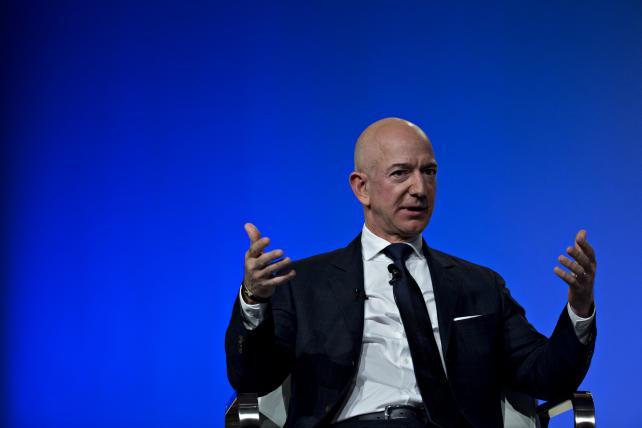 What people are talking about today
Maybe by now you've read Jeff Bezos' astonishing tell-all blog post. The Amazon CEO accused the National Enquirer of trying to extort him by threatening to publish his intimate photos (including a "below the belt selfie.") The Amazon CEO went public with slimy emails he says he received from the Enquirer's parent company, American Media Inc. AMI's CEO David Pecker is an old friend of President Trump. (AMI has not commented yet.)

Bezos, who already had his extramarital affair exposed by the tabloid, says the Enquirer was pressuring him to swear publicly that the tabloid's reporting on him was not politically motivated. Instead Bezos turned the tables by exposing AMI's tactics. He writes: "Of course I don't want personal photos published, but I also won't participate in their well-known practice of blackmail, political favors, political attacks, and corruption. I prefer to stand up, roll this log over, and see what crawls out."

Bezos' post is real-sounding, with digressions, a few quirky word choices (complexifier, apopleptic) and occasional chest-thumping. He comes off as cool-headed and even funny at times. The title is "No thank you, Mr. Pecker."

Bezos put the post on Medium, the online writing platform, and then drew attention to it on Twitter. It doesn't read like it was ghostwritten by a PR team. (Was it?) It reads like a blog post Bezos stayed up late to write. It makes the world's richest person sound like someone you can root for. Plenty of people detest what Amazon stands for, but Twitter spent all night cheering Bezos on. Crisis management pros will be talking about this one for a long time.

'The bikini audition from hell'
Back in December, actress Ingrid Haas wrote a piece for Vice complaining about her treatment during the casting for an alcohol ad. She says she was asked to wear a bikini and dance for a casting director who made rude comments, and she called it "the bikini audition from hell." Now we know what ad she was auditioning for: Anheuser-Busch InBev's mermaid-themed Super Bowl commercial for Bon & Viv Spiked Seltzer. Ad Age's E.J. Schultz and Megan Graham checked in with the companies involved. "I regret that this individual had this experience," Chelsea Phillips, VP for the Beyond Beer division at AB InBev, said in a statement. "Anheuser-Busch does not tolerate any discriminatory or demeaning behavior."
Also: In general, how did this year's Super Bowl ads fare in their portrayal of women? Better than last year, but not by much, according to a new survey. Read more by Jack Neff in Ad Age.

Let them eat cake
Carlos Ghosn, the scandal-hit former chairman and CEO of Renault, has a new problem: His former employer says he may have improperly used a corporate sponsorship deal to host his opulent wedding bash at the Chateau of Versailles, The New York Times reports.

Because Renault paid for renovation work at the chateau, in exchange it was granted the right to use space there for corporate events, The Times reports. But instead of hosting a corporate shindig, it appears Ghosn threw a party for himself and his wife. Renault says it notified French judicial authorities that Ghosn received a personal benefit worth $57,000 in connection to its relationship with Versailles. Ghosn, via his family's lawyer, pledged to pay for the event, belatedly, Bloomberg News reports.

Ghosn's 2016 Versailles bash celebrated both his wedding and his new wife's birthday; a Town & Country photo spread showed actors in 18th-century period costumes and wigs mingling with the guests at the Grand Trianon, a property on Versailles' grounds. The event was reportedly inspired by Sofia Coppola's movie "Marie Antoinette."

Ghosn is in jail in Japan and reportedly faces charges there for underreporting his income while he was chairman of Nissan, Renault's car-making partner. He denies wrongdoing.

Just briefly:
Break on through: There's one week left to enter to win the Breakthrough Experience Award, an honor from Ad Age and WP Engine. The honor recognizes a campaign from 2018 that challenged conventional wisdom to create a breakthrough digital experience for a brand. It's free to apply.

Sold out: Turner says it sold out the Feb. 17 NBA All-Star Game in record time, Anthony Crupi writes in Ad Age. Jon Diament, executive vice president for Turner Sports Ad Sales, says: "There are an awful lot of advertisers out there who want to connect with the young, urban, engaged NBA audience, and this is such an efficient buy for them."

Leaping the Great Firewall: Facebook is blocked in China, but it has an experience center in Shenzhen that's run by a Chinese partner to help local advertisers understand how it works; that way they can target ads to people beyond China's borders, The New York Times reports. "Facebook's revenue from Chinese-based advertisers reached an estimated $5 billion in 2018, or about 10 percent of its total sales, according to Pivotal Research Group," it says.

Ad of the day: Oreo has hired rapper Wiz Khalifa and his son to star in a new campaign, with an ad to air during the Grammys. Khalifa sings the soundtrack for the ad, and "being an Oreo spot, it has cleaner lyrics than 'Black and Yellow' and his other hits," Jessica Wohl writes in Ad Age. Check it out here.