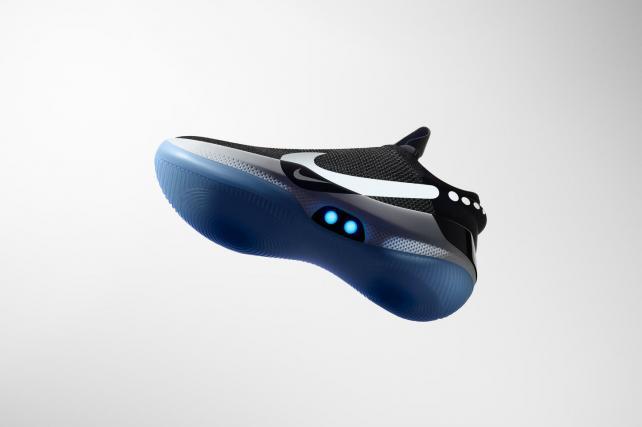 What people are talking about today
The latest tech gadget you didn't know you needed is a $350, app-controlled Nike sneaker that tightens to fit your foot. You no longer have to bend over to tie your laces, which is convenient; the inconvenient part is that the shoes require charging. Nike says its Adapt BB can shape-shift to optimize your comfort at any given moment.

The promo video stars the Celtics' Jayson Tatum and lots of product close-ups, with the shoes levitating and spinning as mystical music plays in the background. "The Future of the Game" is the tagline. In a post, Nike's VP of innovation ponders why shoelaces, a technology he says dates back to 3,500 BC, aren't obsolete yet. One possible answer: They don't require a charging pad.

'Hamberders'
After President Trump served a fast-food feast at the White House, provoking a flurry of memes, Burger King tweeted a message that managed to be both funny and non-controversial. "Due to a large order placed yesterday, we're all out of hamberders. just serving hamburgers today," it wrote.

The backstory: Trump had misspelled the word "hamburgers" in a tweet about the dinner, which he later corrected, and Burger King was poking fun at Trump's notorious social media spelling errors. (On Trump's Inauguration Day, he tweeted that he was "honered.") But Trump himself has joked about his own typos, and there didn't seem to be much outrage over Burger King's tweet. FoxNews.com referred to it as a "sassy joke." Someone tweeted at Burger King, "Give your social media person a raise," a comment that got nearly 6,000 likes.

$13
"Netflix Inc. is raising its U.S. prices for the first time since 2017, with its most popular plan increasing to $13 a month from $11," Bloomberg News reports. Which is pricey or a bargain depending on how you look at it. That's $156 a year, a price you might think twice about, especially if you want subscriptions to other upcoming streaming services, like Disney+. Or you can look at it this way: BTIG analyst Rich Greenfield pointed out on Twitter that $13 is cheaper than a single adult ticket for an afternoon showing of "Mary Poppins Returns" in New York.

Super Bowl watch
Two women-centric brands announced yesterday that they're running commercials in the Super Bowl, a venue where ads don't tend to put women in starring roles. Procter & Gamble's Olay will have a spot in the first quarter of the Feb. 3 game on CBS; Ad Age's Jack Neff notes that it's "a relatively rare entry from a women's beauty brand." And tennis legend Serena Williams will appear in a spot for the dating and networking app Bumble to air during the first half. That ad was created by a team composed mostly of women, Jeanine Poggi reports. The campaign is called "The Ball Is In Her Court," with the theme of women making the first move in dating, friendship and business.
By the way: Ad Age's full tally of all the Super Bowl ads announced so far is here.

Just briefly:
On second thought: Conspiracy theorist Alex Jones and his InfoWars platform set up a streaming channel on Roku and, at first, Roku said it didn't warrant a ban. But hours later, it announced that it had "heard from concerned parties and have determined that the channel should be removed from our platform." Read more by Ad Age's Garett Sloane.

Layoffs: Gay dating app Grindr laid off the editorial and social staff at its online magazine, Into, saying the publication will turn its focus to video, the Advocate reports. The publication was launched in 2017.

On the upside: "Facebook says it's investing $300 million over the next three years in local news programs, partnerships and other initiatives," CBS News reports. The backdrop: Google and Facebook have been soaking up online ad dollars, one factor leading to hard times for news publishers.

Buzz: Everyone's still talking about the #MeToo-inspired Gillette ad that was released two days ago. Actor Elijah Wood tweeted, "This is beautiful. Well done @Gillette." Mike Huckabee, the former Arkansas governor, complained that the brand was "lecturing men on toxic masculinity." He added: "Time to sell my @ProcterGamble stock? Why don't they sell soap, not their soap box?"

Ads of the day: Broadway star Carol Channing has died at age 97; "Hello, Dolly!" was her most famous role, but on the side she appeared in commercials from American Express to Atari (yes, Atari!). Ad Age's Judann Pollack writes that Channing even starred in an ad with an unlikely group of co-stars: Gregory Peck, Cher and Henry Kissinger. Watch Channing's vintage ads here.