READ THIS NEXT
Uber and Lyft could abandon California, and QAnon hijacks a hashtag: Thursday Wake-Up Call 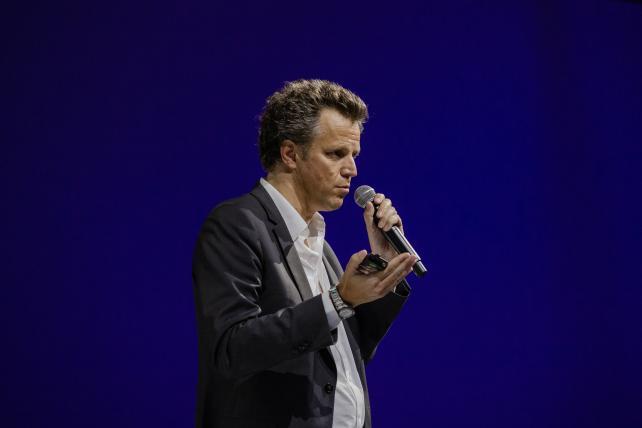 Welcome to Ad Age's Wake-Up Call, our daily roundup of advertising, marketing, media and digital news. You can get an audio version of this briefing on your Alexa device. Search for "Ad Age" under "Skills" in the Alexa app

What people are talking about today
New year, new emojis. We'll be seeing a new assortment of emoji on our smartphones sometime later in 2019, as announced by the Unicode Consortium, which oversees emoji standards. As usual, there are adorable animals (orangutans, flamingos) and plenty of foods (waffles, falafel, garlic.)

But inclusivity is maybe the biggest theme. New York magazine's Intelligencer writes: "Many of the new emoji have to do with with accessibility and mobility. There are motorized and manual wheelchairs, prosthetic limbs, a red-tipped cane, service dogs, and hearing aids." Check them out here.

Publicis -- the owner of Leo Burnett, Starcom and Digitas -- reported a 0.3 percent drop in organic growth for the fourth quarter, and the company blamed the dip on consumer goods clients in the U.S. cutting back on spending on traditional advertising. "We have begun 2019 with optimism even though we expect a bumpy ride in the first quarter," the company says. After that it expects to see more growth from clients that it won in late 2018, Ad Age's Megan Graham reports.

France-based Publicis reported earnings after the markets closed in Paris. Across the Atlantic, Omnicom Group ended yesterday down nearly 5 percent, and Interpublic Group of Cos.' share price dipped 5.6 percent. It's the start of earnings season, and investors will be watching to see what other ad giants besides Publicis have to say about client spending. IPG is up next, on Feb. 13.

A golden age of audio
Spotify is making a big bet -- two bets, actually -- on the future of podcasting. It bought Gimlet Media, the maker of podcasts like "Crimetown" and "Reply All," and it also scooped up Anchor FM, which makes podcasting tools. The deal signals that Spotify, the music streaming service, is taking a broader interest in audio as a medium. And there should be more deals to come: Variety reports that the Swedish company "plans to acquire more podcasting companies, pegging total spending of $400 million-$500 million on multiple acquisitions in 2019." It's not clear exactly how much it already spent; Recode puts the price tag for Gimlet alone at $230 million.
Interesting point: "With the world focused on trying to reduce screen time, it opens up a massive audio opportunity," Spotify CEO Daniel Ek wrote in a blog post.
To go in-depth: Read George P. Slefo's story in Ad Age from a few weeks back on the Spotify-Pandora battle to win in podcasting.

Corny?
Bud Light used millions of dollars' worth of Super Bowl ads to pick a fight with rivals that use corn syrup, and the battle has been dragging on for days. After Miller Lite defended itself in a full-page New York Times ad, Bud Light retorted yesterday with a Twitter post of a ancient scroll, in the faux-medieval style of its "Dilly Dilly" ads, as E.J. Schultz reports in Ad Age. The scroll reads: "In the Bud Light Kingdom we love corn too! Corn on the cob, corn bread, popcorn—we just don't brew with the syrup (what you also call 'dextrose.')" As Schultz writes: "The fact that both brewers are keeping the fight alive shows that each side thinks they are winning." A question, though: Do consumers really care about corn syrup?

Just briefly:
Ratings: "A one-week delay didn't seem to have a material impact on America's interest in the State of the Union Address," As Age's Anthony Crupi writes. The broadcast's audience, about 47 million, was slightly bigger than during the event from a year ago.

Not 'failing': The New York Times (which President Trump constantly and incorrectly brands as "failing") had a strong fourth quarter, with digital ad revenue up 23 percent, Bloomberg News reports. And it's aiming for 10 million subscribers by 2025. The company's stock price hit a 13-year high on the news.

Hmmmm: Jill Abramson, the former executive editor of The New York Times, was accused of plagiarizing several passages in her book about the media industry. Vice News' Michael Moynihan posted the allegations in a Twitter thread. Abramson wrote on Twitter: "I take seriously the issues raised and will review the passages in question."

Moving on: "Brian Wieser, the prolific senior analyst at Pivotal Research Group whose research reports have been considered required reading across the industry, is headed to GroupM," Megan Graham writes in Ad Age. Wieser will be GroupM's global president of business intelligence.

Bye: "Following more than two years of constant turbulence for Facebook, the company's vice president of communications, Caryn Marooney, is leaving the company," Wired reports. Marooney's exit follows the departure of quite a few high-profile execs at the company in the past year.

Nope: "While many legacy media companies are taking a long look at how to best leverage the coming boom in legalized sports gambling, the Walt Disney Co. isn't interested," Anthony Crupi writes in Ad Age.

Listen: Marla Kaplowitz, the president and CEO of industry trade body the 4A's, talks to Ad Age Editor Brian Braiker about the challenges facing agencies, including a talent crunch and the FBI investigation into agency media-buying practices. Listen to their conversation on the Ad Lib podcast.

Ad of the day: Hugh Jackman and Ryan Reynolds have a running gag that involves trading barbs on social media. In an unusual new video, the two actors announce a truce, revealing that they made ads for each others' brands. Reynolds offers a heartfelt tribute to Jackman's Laughing Man Coffee and its goal of giving back to the farmers who grow it. But Jackman's ad for Reynolds' Aviation Gin is … something else. No spoilers here -- watch the spot on Ad Age.