Winter Classic's Dose of Nostalgia Continues to Deliver for League
READ THIS NEXT
Ad Age President and Publisher Josh Golden is leaving the publication
Boston Bruins forward Patrice Bergeron appears in a spot for the 2010 NHL Winter Classic to be held at Fenway Park in Boston.
Credit:

NEW YORK (AdAge.com) -- This week, the National Hockey League will debut its ad campaign for the third annual Winter Classic, a regular season game played outdoors on New Year's Day and broadcast on NBC. The game will be played at Boston's Fenway Park, between the hometown Bruins and the Philadelphia Flyers. The Classic has become a quick hit for the league, garnering hockey a higher profile with mainstream sports fans and advertisers, on a day traditionally reserved for college football, hangover couch-napping and movie reruns on cable.

The first Winter Classic, played in 2008 at Buffalo's Ralph Wilson Stadium and sponsored by Amp Energy, boasted more than 71,000 in attendance and was NBC's best hockey audience in a decade. The game, between the Buffalo Sabres and Pittsburgh Penguins, became its own best commercial when TV audiences saw snow flurries and a shootout win by the young, emerging face of the league, Penguins captain Sidney Crosby.

This year's game, sponsored by Bridgestone, was held in Chicago's historic Wrigley Field in front of 40,818 fans, with everything from the longtime team rivalry between the participating Chicago Blackhawks and Detroit Red Wings, to the throwback jerseys and merchandise, kept tightly bound to the theme of hockey tradition. The TV commercial for the Wrigley game, featuring hockey players getting ready to walk out into the ballpark to the tune of "Take Me Out to the Ball Game," won an Emmy, while the game itself attracted 5.6 million North American TV viewers -- including 4.4 million in the U.S. -- the largest American audience for a regular-season NHL game in 34 years. 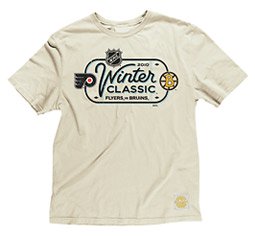 2010 NHL Winter Classic t-shirt
NHL VP-Marketing Brian Jennings said, "It's something that hockey can do because its roots are in the outdoors and so many fond memories for both hardcore and casual fans are about pond hockey. The Winter Classic is probably the best example of us being able to demonstrate to the world the passion and avidity in which hockey fans behave."

Formula that works
This year's game obviously hits many of the same touch-points -- historically popular teams, iconic baseball venue -- and why not? It's a formula that seems to be working. Retail sales of 2009 Winter Classic merchandise were up 85% over 2008. With the majority of regular season hockey appearing on the less-than ubiquitous Versus network, the NHL seems to have created a property that puts the spotlight on the sport that has recently, in many American markets, been relegated to second-class status in the sports pages and on Sports Center. It's a spotlight that not only brings the game to more casual fans, but also has acted as a gateway for potential advertisers. The NHL says it's completely sold out of all of the 2010 Fenway game's sponsorship inventory, and NBC is ahead of 2009 on the sale of broadcast commercial space.

This year's spot, created by Y&R, New York, depicts Flyers and Bruins players walking towards the ice of Boston's TD Banknorth Garden, as the arena fades away to reveal a frozen pond. "The idea this year is to look at how these NHLers grew up playing outdoors on ponds and in the neighborhoods," said Y&R Creative Director Cliff Skeete. "When you talk to players, that's what really makes the game special, they all get that nostalgic excitement so that's what we've tried to capture."

The NHL has also expanded the onsite event of the game for 2010 in Boston. Back in Buffalo in 2008, the game was in and out of Ralph Wilson Stadium in less than a week. In Chicago, events such as corporate skating and youth hockey kept hockey at Wrigley Field for two weeks around the game. This year at Fenway, the NHL is hosting almost a month of sponsored events, including a Bruins "Legends" game and a college hockey doubleheader after the Classic.

The outdoor concept may be an exercise in marketing gimmickry for any other indoor sport, but the NHL has used the image of hockey's past to establish an event to improve the league's future.

"Most people accept the legitimacy of playing a hockey game outside and that's unique to this. This is a sport that began outside," said Ken Schanzer, president of NBC Sports. "We've always said that the absolutely essential visual to get is the players coming out of the locker rooms and you can see their breath."

A lift for the regular season
"What it's done is brought the NHL into conversations where they previously may not have been," said Tom McGovern, managing director of Omnicom's Optimum Sports. "It's always a challenge for many sports, outside of football, to get into conversations about the regular season, but here they've taken a regular season game and made it an event that lifts the whole regular season of the NHL. It's created a dialogue that starts with the Winter Classic then quickly becomes about the NHL, in general. For any property, it's important to create opportunities for fans and marketers to engage in the sport and I think they've made a lot of good decisions with this, and it's clearly worked."

Tony Ponturo, former Anheuser-Busch VP-global media and sports marketing, said that sports fans and TV viewers tend to lean forward a little more when a sports event is sold as special and unique. "The NHL is trying to project that they're innovative and looking to expose their sport to a consumer group beyond their core," Mr. Ponturo said. "They have a very solid core but if they're going to expand beyond that, they need things like the Winter Classic to excite the casual fan."

For NBC, which acquired its NHL broadcasting rights in 2004, the Winter Classic was designed to replace its college football coverage. Jon Miller, exec VP at NBC Sports, said the network thought its Gator Bowl had become a somewhat weakened property, and the New Year's Day football market had become oversaturated. Still, it took more than three years for NBC and the NHL to organize and sell the idea. "The (2008) Buffalo game popped a 2.6 rating, which for hockey was huge, and to do it on New Year's Day was unheard of," said Mr. Miller. "Then people started to really realize the potential for this event."

NHL Chief Operating Officer John Collins said the goal for this January at Fenway Park is to keep hardcore hockey fans happy and make the NHL more relevant among general sports fans. "And in terms of how it's driving the advertising and corporate marketing business for hockey, it's been a beast," he said. "We've seen a huge amount of interest from corporate America in the Winter Classic and getting behind this game. It's awoken what we hoped and believed was there, which is a vibrant marketplace for the NHL."