The food police now have God on their side.

In an effort to call out McDonald's on the childhood-obesity issue, Corporate Accountability International is working with the Sisters of St. Francis of Philadelphia, which own about $2,000 of the company's stock, to offer a proposal at McDonald's shareholder's meeting on Thursday. The proposal asks McDonald's board of directors to issue a report "assessing the company's policy responses to public concerns regarding linkages of fast food to childhood obesity, diet-related diseases and other impacts on children's health." 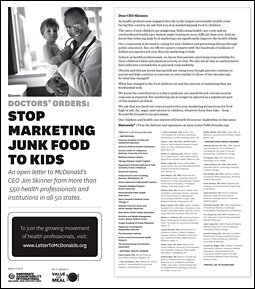 This LetterToMcDonalds's ad will appear in newspapers and online on Wednesday.

It further requests McDonald's to include an "assessment of the potential impacts of public concerns and evolving public policy on the company's finances and operations," according to the McDonald's proxy statement, which recommends shareholders vote against the advisory proposal.

But CAI, which earlier called for the retirement of Ronald McDonald, isn't stopping there. Using the shareholders' meeting and recent FTC guidelines as backdrops, CAI is also launching a campaign that includes full-page ads in Wednesday's newspapers such as the Chicago Sun-Times, New York Metro and the San Francisco Examiner, which will include an open letter to McDonald's CEO Jim Skinner, signed by some 550 doctors and health professionals, urging the company to "stop marketing junk food to children."

The campaign will also include PR and events in various cities, as well as a website, LetterToMcDonalds.org, which will house the open letter starting Wednesday.

McDonald's declined to comment, but the board's statement in the proxy said: "We acknowledge the importance of the subject of children's health and nutrition. While these are global issues that require actions that go well beyond what our company or any other provider of prepared foods can take on its own, we are committed to being part of the effort to address the issues underlying the concerns. We offer a variety of food choices to our customers; provide nutrition information about our menu items so that families can make informed decisions; communicate with children in a responsible manner through age appropriate marketing and promotional activities; and encourage children and families to live balanced, active lifestyles."

Patti Lynn, campaigns director at CAI, said that if the resolution gets a 3% to 5% vote in favor, "we would consider that a success. It's something that we expect to play out over time." She said that McDonald's is the chosen target because it is the leader in the market, and sets the standard for how other fast feeders market to kids.

McDonald's is in the midst of rolling out about a half-dozen ads by Publicis Groupe 's Leo Burnett with Ronald McDonald as the centerpiece, encouraging kids to visit the Happy Meal website. When asked whether she viewed the "Retire Ronald" campaign as a failure, Ms. Lynn said that Retire Ronald has been "a success insomuch as it has begun a critical discourse, emboldened the efforts of other organizations who are concerned about predatory marketing, [and] emboldened lawmakers to propose and secure new safeguards against junk-food marketing to kids."

Even though Ronald McDonald is still around and the resolution likely won't result in much, CAI -- which, according to its annual report, is funded mostly by individual donors and grants -- does have a track record. During the 1990s, when it was known as Infact, it led the charge to ban Joe Camel from RJ Reynolds' ads, and after President Bill Clinton and the American Medical Association followed suit, the tobacco mascot was permanently retired.