Baden Likes His Luck in Marketing, but Wants Broad Strategy

Oakley is looking for a new agency to come up with its own version of Nike's "Just Do It," Ford's "Go Further" or Chevrolet's "Find New Roads."

Oakley has narrowed down to two finalists in an agency search that initially included at least 15 shops, according to CEO Colin Baden. The winning agency will be tasked with a big job: to help Oakley come up with an internal and external rallying cry that will be used around the world to define what the sports eyewear brand is all about.

"It's long overdue," said Mr. Baden, who didn't identify the two finalists. Most of Oakley's marketing budget is devoted to sports marketing, he said. Oakley spend $11.3 million on ads in 2013, according to Kantar Media. But the CEO seems ready to spend more on a broad-based marketing strategy. 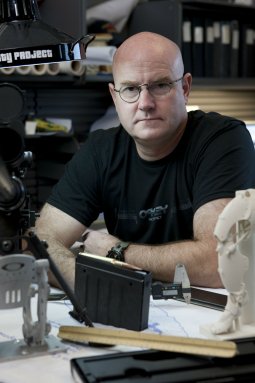 But sponsoring athletes is a double-edged sword. Oakley was one of the last sponsors to stick by cyclist Lance Armstrong. But it finally dumped the disgraced former Tour de France winner when it concluded he was lying through his teeth about his use of performance-enhancing drugs.

Oakley still has a deal with Olympic sprinter Oscar "The Blade Runner" Pistorius, who's on trial for shooting and killing his girlfriend in his home country of South Africa. Oakley has suspended the deal pending the results of Mr. Pistorius' trial.

Mr. Baden is tall and amiable, referring to Oakley as a "lucky" brand. But talking to him, you get the sense he's a handful as a client.

Oakley handles marketing in-house from its corporate campus and design center in Foothill Ranch, Calif. Among the shops that have recently worked with Oakley on projects are Factory Design Labs in Denver and New York-based Thinkmodo.

Mr. Baden sees the writing on the wall when an agency digs in to defend its work: "Soon as you start drawing lines, then I always know that's the beginning of the end."

Advertising Age interviewed Mr. Baden at Oakley's new flagship store in the Big Apple that was designed by Moment Factory. The flashy, high-tech outlet offers an "eyewear bar" (where customers can design their own sunglasses) and Oakley's new ICON lifestyle apparel collection previously sold only in European stores. Excerpts:

Ad Age: What do you want from this agency search?

Mr. Baden: I like to think we're a premium brand and that we're known for good design. It was nice to hear from [agencies] that were competing to have our account that they want to be associated with us.

Mr. Baden: We've had AOR's. The relationships start out strong. As a culture we like to keep exploring. It's like that quote on the wall: "Everything can, and will, be made better." It's hard. I've seen maybe three or four agencies since I've been with the brand. It always follows a cycle. They get tired [of me] critiquing their work. … This round I said: "We're getting married. And it's for a while. This is what goes on in our relationship. … My point of view doesn't go away. It gets worse."

Mr. Baden: Saying it's a marketing campaign would under-deliver the significance. … We need to think big. … A company-wide mantra around the brand. ... Just make a statement. Be relevant for that -- not just because we make great stuff.

Ad Age: What athletes have you used most in your marketing?

Mr. Baden: It certainly fluctuates. It was Michael Jordan. Then it was Lance [Armstrong], Shaun White. Now it seems to be Bubba Watson.

Ad Age: You personally know Mr. Pistorius. What's your reaction to him being charged with murder?

Mr. Baden: I've been with Oscar on several occasions. What a great story [he had]. What a wonderful human being. What an inspiration. And now? I don't get it. I don't get it.

Mr. Baden: Bubba wins the Masters. Great. We just got millions of dollars in advertising for free. When 33 miners came out of that Chilean mine wearing our products, because they needed to, how much marketing did we get out of that? For free?

I just think we're a lucky brand. We're on your face. That's what they photograph. They don't photograph your feet. We had [hundreds] of Olympians wearing one frame color [during,the Sochi Olympic Winter Games].