Organic Doritos Give Frito-Lay a Pathway Into Whole Foods 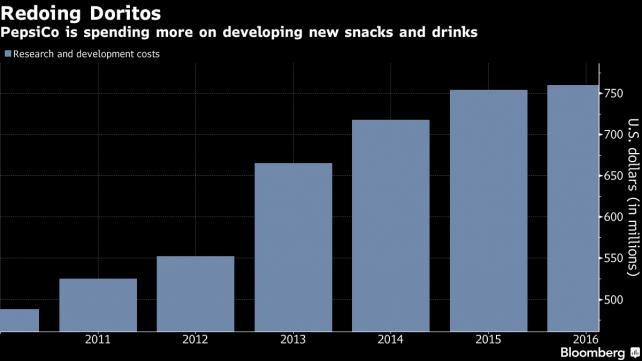 Amazon.com Inc.'s acquisition of Whole Foods is coming at just the right time for Frito-Lay, the snack giant known for Doritos, Ruffles and Funyuns.

The division of PepsiCo Inc. now has versions of 11 core chip brands without artificial ingredients—including Lay's, Tostitos and Cheetos—and it's aiming to break out of the traditional snack aisle and get into organic grocery stores. The lineup, marketed under the name "Simply," meets all the criteria needed to be sold in Whole Foods, according to PepsiCo executive Jonathan McIntyre.

It's all part of a push to build a more healthful reputation for Frito-Lay brands, a significant undertaking at a company famous for bright-orange cheese powder. Natural products are the biggest source of growth for the industry right now, said McIntyre, who oversees research and development for PepsiCo's snacks. And Frito-Lay sees an opportunity to reach new customers—and charge higher prices—by targeting organic-food shoppers.

There's also more pressure to get a foothold at Whole Foods during a time when Amazon is threatening to upend the supermarket industry. The e-commerce site is using the grocery chain to support its food-delivery business and looks to take market share by cutting prices and integrating online and offline operations. But the big enticement at Whole Foods remains the promise of healthful and wholesome products.

"The notion of clean and simple is very important to a segment of consumers," Frito-Lay Chief Marketing Officer Jennifer Saenz said in an interview at the division's headquarters in Plano, Texas. "They're searching for that."

The main question is whether Whole Foods will be an ally in helping Frito-Lay establish good-for-you credibility. So far, the chain hasn't shown signs of embracing Doritos and similar brands, which some shoppers consider junk food. But Amazon's takeover of the grocery chain could bring an opportunity to make inroads.

The e-commerce behemoth already sells Frito-Lay's Simply line on its website, and it's clearly willing to make changes at Whole Foods. When the acquisition closed on Monday, Amazon immediately slashed prices on many products and began stacking its Echo devices next to groceries.

The old Whole Foods might have turned up its nose at big makers of consumer-packaged goods, but Amazon could have different ideas—especially because smaller suppliers may not be able to meet its more ambitious demands, said Sanford C. Bernstein & Co. analyst Ali Dibadj.

"Amazon's acquisition makes it much more likely that Whole Foods will carry these better-for-you brands, even if they're made by large incumbent CPG players," he said. "The smaller brands just can't keep up with the spending and velocity required from Amazon anymore. We expect Whole Foods to carry more—and more big brands too."

PepsiCo declined to discuss its relationship with retailers, but it's working on several fronts to reach the type of shoppers who frequent Whole Foods. Chief Executive Officer Indra Nooyi has emphasized the importance of better-for-you products and laid out health targets for its food and beverage portfolio.

One of the most daunting challenges is changing Frito-Lay's reputation. Most people don't associate its main snack brands with words like natural or organic, Saenz said. That's why Frito-Lay introduced the Simply name.

On the packaging, the "Simply" appears in capital letters above the brand logos, and labels prominently spell out the lack of artificial ingredients. The company found that shoppers often needed some convincing, Saenz said.

"Some of the feedback we hear often is, 'An organic Dorito? Really?"' she said. "We want to make sure that the credibility is coming through loud and clear."

Frito-Lay needs to push into premium products because its core business is getting squeezed, Bernstein's Dibadj said. Private-label products are stealing customers at the low end, and the natural brands are attracting well-heeled shoppers.

"All consumer companies right now are trying to figure out how to get into the natural shelf space and the natural home's pantry," Dibadj said.

PepsiCo isn't the only food giant burnishing its nutrition panels.

Mondelez International Inc. developed a line of crackers and snack bars, called Vea, that have no artificial ingredients or genetically modified organisms. Campbell Soup Co. agreed to pay $700 million for an organic soup and broth company in July. And Kraft Heinz Foods Co. is working to clean up its hot dogs.

PepsiCo's chief beverage rival, Coca-Cola Co., is reformulating more than 200 products to reduce the sugar in its drinks.

Acquisitions are another way to reach organic shoppers. In 2006, PepsiCo bought Stacy's Pita Chips, whose products are already in Whole Foods. But until the Simply line came out, the company's core snacks never met the grocer's requirements. Frito-Lay has been gradually releasing products under the new banner.

"The challenge is, will Cheetos ever connote 'good for you'? That's a difficult premise to work on," Dibadj said. "But perhaps Cheetos Simply can connote 'better for you,' and that might be enough for some consumers."