Process to Create Thinner, Cheaper and Greener Products Has Potential to Become a B-to-B Goldmine
READ THIS NEXT
Pinterest reports strong revenue as ad demand rebounds

Procter & Gamble is plotting a revolution in packaged goods, but not with a new product. Rather, the Cincinnati-based marketer has developed a process to make new-age plastic that's thinner, cheaper and greener than the current industry standard.

Not only is P&G planning to use the material for its own products, its patent applications also indicate the company may have a business-to-business goldmine if it can sell it to other marketers from non-competitive package-goods players to automotive giants.

According to a person familiar with the matter, former P&G Chairman-CEO Bob McDonald said the company's new plastics technology could save P&G alone $1 billion a year by using less plastic and different raw materials. Mr. McDonald likened the technology to some of the company's most transformative, this person said, including disposable diapers and two-in-one shampoos. While Mr. McDonald stepped down in May, activity around the plastics technology has stepped up in recent weeks under his predecessor-turned-successor A.G. Lafley. (Mr. McDonald was not available for comment.)

P&G declined to comment, citing a quiet period in advance of its Oct. 25 earnings release. 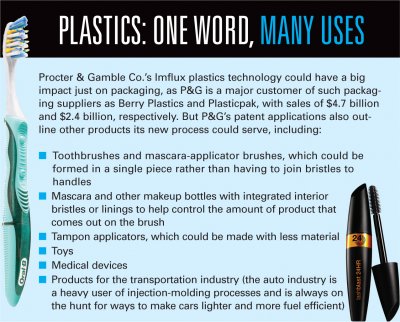 The technology, which is being developed by P&G's wholly-owned Imflux subsidiary, would be welcome news for a company that spawned such brands as Tide, Pampers and Swiffer but has been under growing scrutiny from investors over the lack of big hits or major new brands in more than a decade.

Tax credits
P&G recently got Ohio tax credits of up to $2.6 million for an Imflux plant that will employ up to 221 people north of Cincinnati; the company also has ramped up hiring efforts in recent weeks, posting ads seeking a plant superintendent, VP of global manufacturing and a recruiter to hire more people.

While local-press reports say it will be a plastic-processing plant, Imflux job listings indicate it will make molds for the proprietary P&G "high-velocity injection molding" system to be deployed in other plants, including those of other companies. P&G's packaging plants generally are run by outside suppliers and located close to its production facilities, with the nearest big P&G factory in Lima, Ohio, about 100 miles away.

The plant and hiring suggest P&G is putting far more stock in this technology than it has in other recent products spawned by its corporate new-ventures programs, said Deutsche Bank analyst William Schmitz. One of those, Bella and Birch, was a paint that went on walls like wallpaper. P&G once had high hopes for it as a potential billion-dollar brand, according to people familiar with the matter, but quietly folded the business in 2007 after a brief test in St. Louis. After forays into everything from car-wash and dry-cleaner franchising to concierge-physician services, P&G last year said it planned to focus innovation efforts closer to its core.

Beyond packaging, CPG
P&G's packaging business alone is huge. Plasticpak, one of P&G's largest suppliers, has $2.4 billion in annual sales. The last time Plasticpak issued a public 10-K report with the Securities and Exchange Commission in 2004, P&G made up 27% of its then-$1 billion in sales.

P&G's patent applications say its manufacturing system can make packages with material as much as 75% thinner than existing ones. The technology also makes it easier to use recycled resins or plant-based alternatives to petrochemicals and will help P&G make packages more recyclable because it allows caps and closures to be made from the same material as the rest of the package.

But the patent applications also outline how the Imflux technology can be applied to products themselves, including toothbrushes, mascara brushes and tampon applicators, allowing them to be made thinner or, in the case of brushes, in a single piece rather than by joining bristles to handles.

The applications cover possibilities well beyond CPG -- including medical devices, toys and parts for the "transportation" industry. Automakers are already among the biggest users of injection-molded plastics and always on the lookout for ways to take weight out of vehicles to meet rising federal fuel-economy targets.

Focus on sales
Imflux's hires and job listings suggest a major focus on selling the technology outside P&G. The unit's CEO is Nathan Estruth, a longtime executive in P&G corporate new ventures and former VP of its FutureWorks skunkworks division. In his 22-year career at P&G, he has led everything from the 1999 launch of online beauty mass-customization retailer Reflect.com to the franchising of Mr. Clean Car Washes and Tide Dry Cleaners.

Mr. Estruth has spent the past three years working on the Imflux project, according to the company's website, and opted to leave his role overseeing FutureWorks, which, according to people familiar with the matter, has been folded into P&G's broader new-business-creation efforts headed by Group President Charles Pierce, who also oversees oral care.

As his chief marketer -- or customer-care leader -- Mr. Estruth selected Jared Kline, who's formerly worked on P&G's Tremor and Vocalpoint word-of-mouth marketing businesses, which also are sold for use to outside marketers.