BATAVIA, Ohio (AdAge.com) -- Ross Love, the longtime VP-advertising of Procter & Gamble Co. and the first African-American to serve in that post, died Tuesday at Christ Hospital in Cincinnati at 64 after a brief illness. 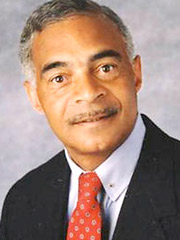 Ross Love
Mr. Love, who succeeded Robert Goldstein in the VP-advertising position after the latter's tragic death in a rafting accident in 1987, continued in that position until 1996, when he left the company to run his burgeoning urban radio network.

Mr. Love joined former Housing and Urban Development Secretary and Ohio Secretary of State Ken Blackwell in buying Cincinnati radio station WIZF out of bankruptcy in 1994. The 20-station Blue Chip Broadcasting group he ultimately built from those humble beginnings became the second-largest African-American-owned radio group in the U.S. and sold to Radio One for a reported $190 million in 2001. Mr. Love later bought another Cincinnati AM station, WDBZ, and developed it as a black-oriented news/talk station, selling that to Radio One in 2007 for $2.65 million.

Later, he headed Blue Chip Enterprises, a venture fund that invests in companies launched by African-American entrepreneurs, including CardioQuickSys, a maker of cardiac-related equipment. He was also a minority owner in the Cincinnati Reds.

He was also a former chairman of the Association of National Advertising, through which he worked with the Clinton administration in the 1990s to develop the first TV content ratings . He also led a task force that developed anti-drug ads for African-American youth for the Partnership for a Drug Free America.

In Cincinnati, Mr. Love was a major force behind United Way fundraising for years and was part of a task force assembled in 2001 to work toward racial healing following riots in the city the same year.

Mr. Love joined P&G in 1968 after graduating from Syracuse University, where he'd later serve on the board of trustees. He worked his way up the brand and advertising management ranks until taking the VP-advertising job under marketing chief Bob Wehling after Mr. Goldstein's death.

Mr. Love was VP-advertising at a time when the position came with a bit more veto power than central marketing roles typically do today in multi-brand companies. He signed off, for example, on Pringles comparison ads against rival PepsiCo's Frito-Lay in the late 1980s at a time when P&G typically didn't take on competitive brands directly in ads.

He was also a mentor to many people inside and ultimately outside P&G, helping P&G brand manager Doug Worple find contacts for freelance creative work prior to him founding the Cincinnati agency that's now known as Barefoot Proximity, a unit of Omnicom Group's BBDO.

"What I remember most is what a mentor he was for young people, particularly young minority people," Mr. Wehling said. "He was always a great listener, and he spent a long time with our young people and encouraged them. I know we kept a lot of people at P&G who we would have lost otherwise because of Ross."

In addition to his wife, Mr. Love is survived by a son, Jonathan, and a daughter, Yanna. Funeral arrangements are pending.