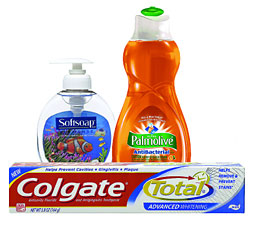 Three of the four said they stepped up marketing spending last quarter or in the first half as they announced quarterly results today, while L'Oreal has previously indicated plans to hike spending about in line with sales.

Their results stood in sharp contrast to the picture painted by industry heavyweight Procter & Gamble Co. when it last month pulled down organic sales and earnings forecasts for the quarter due to market share, economic and currency woes. Neither the economy nor currency seemed to hurt P&G's rivals much, as they appeared to benefit from its share losses.

By comparison, P&G last month pulled down its forecast for organic sales growth by two points to a 2% to 3% range from the previously forecast 4% to 5%. Organic sales growth is a measure that strips out effects of currency, acquisitions and divestitures.

While Anglo-Dutch Unilever and French L'Oreal won some margin and spending flexibility thanks to a weakening euro, U.S.-based K-C and Colgate posted strong results without that advantage and likewise raised marketing spending.

Kimberly-Clark executives said on an earnings conference call that "strategic marketing spending," which excludes price promotion, was up 25% or around $100 million, bringing it to near the 5% of sales where that measure stood in 2010 before K-C pulled back on spending amid rising commodity costs last year.

Colgate-Palmolive said ad spending was up 4% last quarter from a year ago, with plans to accelerate spending growth in the back half of the year.

Unilever said advertising and promotion spending rose by $400 million, led by digital spending that rose 50%. The company added that it would increase full-year spending at least as fast as sales.

In an earnings conference with investors, Unilever CEO Paul Polman reported strong results even as he presented a gloomy global picture that included the European public debt crisis, slowing growth in China and drought in the U.S.

Mr. Polman attributed the company growing ahead of its markets to "advertising that meets tougher action standards before we actually put it on air, faster global rollout of some of our bigger bets, better people, better trained and [with] better tools for the job, and encouraging and rewarding great performance and no longer tolerating mediocrity."

Mr. Polman focused on gains Unilever is making in personal care in the U.S., where P&G is market leader, saying his company had passed P&G in overall value share leadership in U.S. daily hair care, excluding hair colorants where Unilever doesn't compete. He noted that Unilever had reached a record share above 50% for the first time in bar soaps and body washes.

Colgate Chairman-CEO Ian Cook, too, highlighted share gains in such categories as U.S. toothpaste and toothbrushes, where P&G is the principal competitor, while adding that the company is preparing to open a new oral-care front with the launch of Colgate Optic White Mouthwash.

Kimberly-Clark's growth was also led by personal care, with organic sales up 7%, particularly in diapers outside the U.S. and Western Europe. The company saw a 40% volume increase in China and 20% in Russia and Brazil in diapers along with more modest gains such as mid-single-digit growth in North American feminine care.

The strong results, upbeat forecasts and marketing spending hikes from key competitors add to pressure on P&G, which reports its quarterly results Aug. 3. As part of a five-year $10 billion restructuring program, P&G plans to reduce marketing spending by $1 billion over prior projections by holding growth below that of sales.

P&G's board last week took the unusual step of announcing unanimous support for Chairman-CEO Bob McDonald and his turnaround plan, which includes focusing more on the biggest countries and categories, cutting costs and stepping up innovation.

The board's announcement came a few days after a Bloomberg report, citing unnamed sources, said some board members were discussing replacing Mr. McDonald with someone outside the company, and about a week after activist investor Bill Ackman said his Pershing Square Management hedge fund had taken a $2 billion stake in the company.