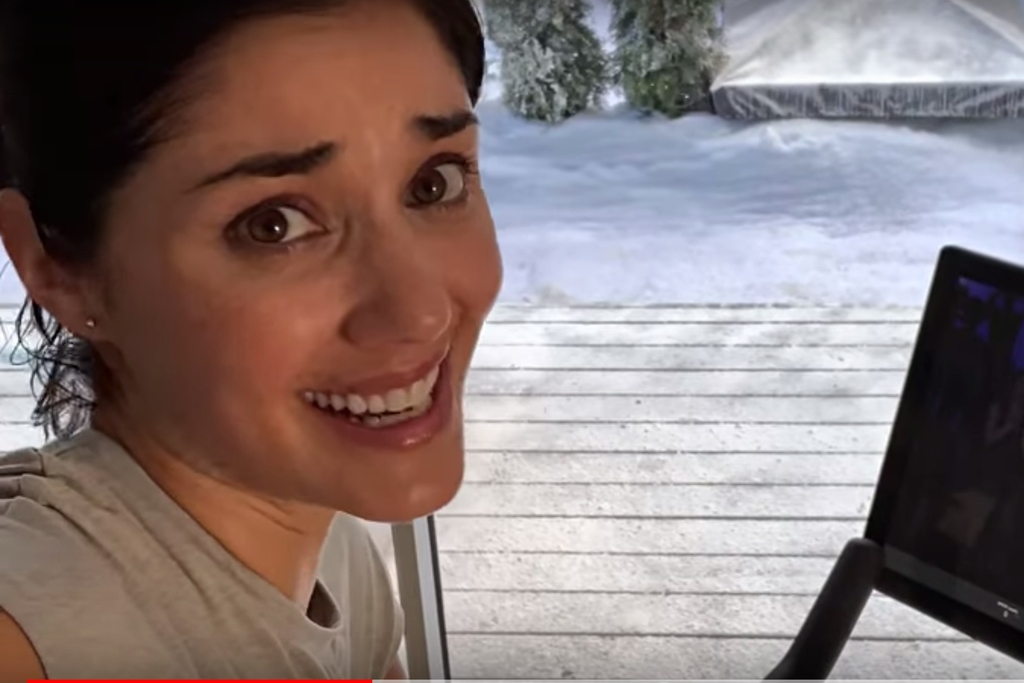 Poking fun at Peloton
Some people love fancy fitness brand Peloton, and others love to make fun of it. A holiday ad for the brand’s stationary bike has inspired snickering and spoofs on social media, and Peloton was among the top U.S. Twitter trending topics Monday.

What is it exactly about the ad that's capturing people’s imagination? It's probably some combination of overacting, cheesy background music and a plot about a husband gifting his gorgeous, in-shape wife a $2,000+ exercise bike to help her get even more in-shape. In other words, the commercial is about a “116 lb woman’s YEARLONG fitness journey to becoming a 112 lb woman,” tweeted @ClueHeywood, who created a hilarious Twitter thread about Peloton's advertising in January.

Some commenters also think the ad gives off an unintentionally dystopian vibe; despite the woman's Instagrammable, perfect-looking life, there's a sense that she actually dreads the high-tech gadget that takes over her living room. “The only way to enjoy that Peloton ad is to think of it as the first minute of an episode of Black Mirror,” someone tweeted. At least two parodies of the new commercial popped up, including one in which the bike causes a divorce.

It’s not clear what agency made the ad. Mekanism has done work for Peloton, but the shop didn’t return emails inquiring about the new commercial. Whoever made it, though, has put Peloton back in the national conversation and gotten headlines in outlets from Vice to Fox News. And as someone tweeted, “We all need to treasure the things that bring us together as a nation, as a people. Collectively hating on this Peloton ad is that thing.”

“The change is further proof of the increasing blurring of lines between d-to-c brands and established retailers. As the smaller companies try to scale their businesses, they are borrowing some tactics, like brick-and-mortar locations, and holiday discounts, from the playbooks of larger brands.”

And if the playbook works, why not use it?

“McDonald's already serves the McChicken and has tested out a number of different chicken sandwiches, but its offerings have failed to inspire the type of excitement surrounding other popular fried chicken sandwiches. The new version could be a way to bring in more customers, better compete with rivals like Popeyes and Chick-fil-A, and placate its franchise operators, which have been lobbying hard for the menu item.”

It’s hard not to feel a little sorry for the old standby, McChicken: It’s not fancy, it doesn’t have crinkle-cut pickles or a potato roll, but it’s been there when you need it.

Just briefly:
‘Liam Bot’: At a time when Facebook is under scrutiny for everything from data collection to elections, the company created a chatbot that “teaches employees what to say if friends or family ask difficult questions about the company over the holidays,” The New York Times reports. It even has a name; it’s called the “Liam Bot.”

Question mark: Twitter and Square CEO Jack Dorsey plans to live in Africa for up to six months next year, and “analysts have doubts about who will run the companies in his absence,” CNBC reports.

Podcast of the day: Terri Meyer, co-founder and co-CEO of Terri & Sandy, talks about unplugging through international travel in this week’s edition of the Ad Block podcast, hosted by I-Hsien Sherwood and Alfred Maskeroni. Subscribe on iTunes or Spotify.

Goodbye: Lil Bub, a droopy-tongued, big-eyed cat whose sweet expression captivated the internet, has died at age 8, inspiring obituaries in The New York Times, The Washington Post, Wired and more. Lil Bub, who had feline dwarfism, died of a bone infection, The Times writes. Bub endorsed Scoop Away kitty litter and pet CBD oil, had her own line of merchandise and raised money for animal charities. In an era of internet-famous pets, including Grumpy Cat, gentle Lil Bub had her own niche: “Lil Bub represented loving something unconditionally, of protecting those less powerful,” Wired writes. “She was the unofficial mascot of never punching down.”