Rough Patches, Risky Moves Cost It Share; Will Return to Basics Be Enough to Get It Back in Game?
READ THIS NEXT
Celebrating AAPI creative excellence

It's debatable whether the brand was defeated or unwittingly surrendered by abandoning tried-and-true advertising for generation-next marketing tactics, and it's also unclear whether it will stay down for long.

But this much seems certain: Pepsi blinked. Its flagship, the perennial No. 2 to brand Coke, dropped to the No. 3 slot as it was surpassed by Diet Coke. As a result, for the first time in two decades, PepsiCo ceded the soft-drink category's two leading share positions to its legendary rival.

The shift was historic if not sudden, as it capped a long downward spiral marked by management changes, a complete overhaul of the brand's marketing and logo, the close of a storied agency-client relationship and an exodus of marketing talent. 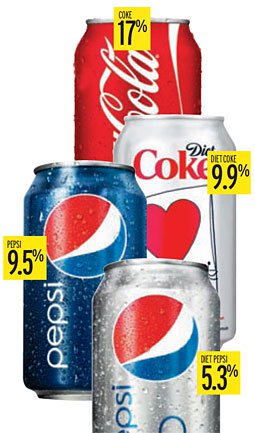 Coke vs. Pepsi: Share of the carbonated soft-drink category for 2010

As war stories go, this one is epic. "It's a tale of two companies, both in the same category, both facing the same market dynamics," said one executive close to Pepsi, referring to that brand's rivalry with Coke. "One of them stayed the course and recognized that brand building is a long-term proposition. It built on its heritage, protected its brand and invested in its brand and its people. The other went into a tailspin, trying to reverse its fortunes overnight at any cost. It lost its best people, lost its continuity and, ultimately, lost its direction."

That's not to say that Coke didn't lose a few battles, some spectacularly. The 1980s were marred by the New Coke debacle, celebrated in a book written by ex-PepsiCo CEO Roger Enrico, "The Other Guy Blinked: How Pepsi Won the Cola Wars." Then there was the late 1990s contamination scare in Belgium. Mass layoffs and a revolving cast of CEOs marked the early 2000s.

Perhaps that's why the beverage giant, often publicly gleeful over ground gained on its competitor, is tempering its response to news that its long-time rival, founded in 1898, has fallen behind a brand less than three decades old.

"It's an accomplishment," said Coca-Cola spokesman Dan Schafer, of the news released Thursday by Beverage Digest. "But we've also delivered three straight quarters of growth here in North America. Each of these things shows us we just have to keep on doing what we're doing."

So, how did Pepsi fall so far, even after managing to put behind it the Peter Arnell-fueled mishaps of 2009? (Remember his much-mocked memo that compared his redesign of the Pepsi globe logo to the Earth's magnetic fields and the sun's radiation?)

It seemed to be on the right track with the Refresh Project, rolled out in early 2010 and hailed by this publication as a "case for marketing textbooks." The program, which doled out $20 million in grants to consumers with "refreshing ideas that change the world," was well regarded by those inside and outside the beverage and advertising industries. And Pepsi's move to bow out of the Super Bowl, though criticized by some, was widely seen as a brilliant marketing ploy, as its absence of ads generated more publicity than Coke's two 60-second spots.

But as 2010 wore on, cracks began to show. Some questioned whether the Refresh Project was affecting the bottom line -- negatively or positively. The program, while helping to foster good relationships between bottlers and their local communities, was marred by allegations of cheating, and some complained that well-organized and well-connected nonprofits were able to snag the grants over average consumers. The company, however, has steadfastly stood by it and maintains that Refresh Project has garnered an "unbelievable response."

"It's a long-term play," said Pepsi spokesman Joe Jacuzzi, noting that the program would be evolving and expanding to other countries this year.

But long term or not, it might not be visible enough. "In the cola wars, the Refresh Project by itself isn't enough to market Pepsi's cola brands," said John Sicher, editor and publisher of Beverage Digest. (Former Pepsi exec Ralph Santana, now with Samsung, indicated as much at the Association of National Advertisers meeting last fall when he said of Refresh: "The key learning for us was that in addition to having a cultural idea that taps into a mass sensibility, you need to make sure that your idea is getting enough exposure to be successful." Pepsi strongly disputed that statement.)

Mr. Sicher believes that in addition to Refresh, the company needs "more product-oriented advertising and marketing. I think that the 2010 results are probably a wake-up call for Pepsi."

To that end, Pepsi plans to pour $60 million into an integration and sponsorship with "X Factor," the Simon Cowell-created rival to Coke-sponsored "American Idol." The beverage division, headed by Massimo d'Amore, also will ramp up spending by 30%, with campaigns planned for trademark Pepsi, as well as Diet Pepsi and Pepsi Max.

But it's doing so bereft of a senior marketing leader. The company's sparkling-brands division has been without a chief marketing officer since Lauren Hobart's departure in January. In fact, executives close to Pepsi bemoan the dearth of creative ideas surrounding the brand, citing historical turnover in the marketing department, a focus on "better for you" products rather than cola and, overall, "flavor-of-the-day marketing." In large part, it's the same accusations that have been leveled at the company for two years.

Though Pepsi did advertise on TV for Refresh Project, the groundbreaking, celeb-studded campaigns that the brand was known for have been conspicuously absent in recent years (see timeline). The closest it's come recently was "Refresh Anthem," created for the 2009 Super Bowl by TBWA/Chiat/Day, which took over creative duties from BBDO in 2008. It featured Black Eyed Peas singer Will.i.am and was set to Bob Dylan's "Forever Young," but it received mixed reviews.

At last month's Consumer Analyst Group of New York conference, Pepsi came out swinging in defense of its strategy. "We have a very good beverage business in the United States," Indra Nooyi said during a presentation at the meeting. "There's been some noise around our position and our performance, so I want to set the record straight. … We have done major work over the past two years to strengthen our brands in North America and we're beginning to see traction on all of these initiatives."

She was referring to October 2008, when PepsiCo announced it would spend $1.2 billion over three years to reinvigorate its beverage brands via a complete packaging, merchandising and marketing overhaul. But with 2011 marking the third year since that announcement, news that the Pepsi brand slid to third place surely came as a psychological blow to employees.

Mr. Jacuzzi, however, said it wasn't viewed as such, pointing out that colas are only one front in a wider war. "We're looking at our total position," he said. "Consumers want a wide range of products. … Today we're fighting a totally different battle on a much bigger battlefield than just colas, though we are completely committed to carbonated soft drinks."

Executives close to the company and industry insiders are mixed on whether Pepsi can turn things around. "Pepsi is going to step up its marketing behind brand Pepsi this year, and I think it's critical that they do so," said Mr. Sicher.

It will be a hard road. Credit Suisse analyst Carlos Laboy recently downgraded PepsiCo's stock, citing the "divergent philosophies" between it and Coca-Cola. PepsiCo, he said, emphasizes innovating to find what the consumer will want next, while Coke focuses on innovation within its core brands. "It took decades to get [Pepsi] to No. 2, and it is risky that PepsiCo cannot avert this slide."

Ms. Nooyi said at CAGNY that she believes PepsiCo has the "best management team with the most amount of experience."

And though Mr. Laboy called some of his observations "intangible" and noted they were at odds with personal experiences, he noted the "defensive tone" of the last two PepsiCo conference calls. "For right or wrong, they left the impression that PepsiCo's culture is turning increasingly insular and abrasive just as Coke's seems to be opening, engaging and enjoying a renaissance of partnership and team principles," he said.