Next month new Pepsi bottles will hit shelves for the first time in 16 years -- but that's just the beginning. In the months to come, expect more striking changes as the brand adapts and aligns its design across various "touch points" from in-store marketing and coolers to trucks and packaging.

The redesign is part of Pepsi's effort to create a more-cohesive look for the brand, which has been quick to change its logo over the years. It's not unusual to see soda cans with the latest logo being unloaded from a truck bearing an outdated one. 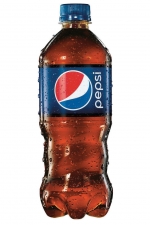 Pepsi's current logo was introduced in 2008, and it won't change. But the way it is seen will be far from static. It could be magnified, reshaped or only partially seen, but the visual cues will make it unmistakably identifiable as Pepsi. For example, its equity of red and blue divided by white could be creatively adapted -- imagine a guitar or the Statue of Liberty swathed in red, white and blue, mimicking the logo.

Brad Jakeman, president-global beverages group, has touted the idea of "strategic variance," citing MTV, Starbucks and Google as brands that regularly fiddle with their logo size, design and color.

And the new bottle shape -- a swirled grip on the bottom portion of its 16- and 20-ounce bottle, with a shorter label edged in a "cola-colored" border and an enlarged version of the globe logo -- is a standard Pepsi hopes to build on, just as Coca-Cola has long done with its classic contour-shape bottle. A 12-ounce glass bottle, which will be available in select retailers, features the same twisted shape as well as the globe logo ringed in a thick silver line.

Still, Ms. Krembs said it will be some time before the entire system is turned over. She expects half the country will be converted to the new package and feature new designs by year's end.