Forget the days when you had just a handful of choices at the soda fountain. 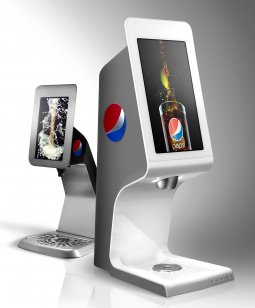 Next week, PepsiCo will begin testing "Pepsi Touch Tower 1.0" as part of a series of new fountain rollouts, according to Beverage Digest.

The device packs a lot of punch in a small space. Touch Tower 1.0 is a small counter-top unit with a digital touch screen. Rather than the half a dozen or so picks consumers had in the past, this device will offer nearly 100 possible flavor combinations, including as many as eight PepsiCo brands. According to Beverage Digest, PepsiCo has been testing the unit overseas since last year, and the U.S. test will run in a Denver restaurant chain called Garbanzo Mediterranean Grills.

PepsiCo's promise to offer consumers so many different beverage possibilities shows how far fountain drinks have come. The concept started in Europe and offered only mineral water, and became popular in the U.S. in the late 1800s and early 1900s. At their height, soda fountains were a fixture in train stations, pharmacies and ice cream parlors, and served as a community hub, a place to gather and share news.

"Innovation is critical to PepsiCo's long-term success, and it's no secret that we've been hard at work developing new fountain equipment," said Gina Anderson, a spokeswoman for PepsiCo. "This unit is the first prototype in a wide portfolio of equipment we're exploring that will offer our customers variety and flexibility while creating an engaging experience for consumers. We're continuing to evolve our equipment design and look forward to learning more during our pilot tests."

PepsiCo's move follows Coca-Cola's introduction of a Freestyle fountain machine in 2009 and is now available nationally. Theirs is a floor unit, but it similarly features a touch screen. Freestyle serves up 125 different flavors of soft drinks, flavored waters, sports drinks and lemonades and sends usage data, such as what flavors are most popular at what times of the day, to Coca-Cola HQ.