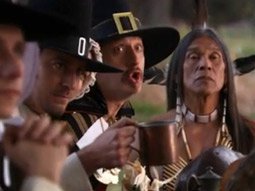 "The past year has not been an easy one for many agencies and clients dealing with an economic recession," said Ad Age Executive Editor Abbey Klaassen. "But it's awesome to see it hasn't stopped the small-agency community from delivering creative, effective work and nurturing their unique cultures. We're humbled to recognize the great work in the industry and especially excited to see a few of last year's honorees, Pereira & O' Dell and Mono, win big awards this year." 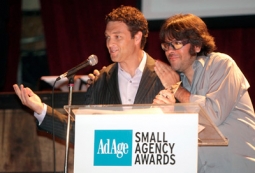 Andrew O' Dell and PJ Pereira
Small Agency of the Year 2010:
Pereira & O' Dell, San Francisco
In only its second year in existence, this thriving agency has seen a 161% increase in revenue and is nearing the launch of a new office on the east coast. It intends to hire at least 30 more people in 2010 as it builds upon an already impressive portfolio of clients that includes Lego, Muscle Milk and University of Phoenix -- a major achievement coming out the economic downturn. 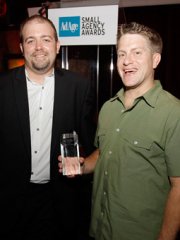 Chris Thornton and Jeremy Porter
Campaign of the Year:
Definition 6, New York, for Coca-Cola's "Happiness Machine."
The challenge? Turn the routine task of buying a soda into a happy occasion. The solution? Gut a Coke machine, put someone inside and install it in the cafeteria of St. John's University. When students put in a dollar, they were given flowers, pizzas, sunglasses -- even a 12-foot sub sandwich. It made an impression on the students and the video made an impression on the web.
Agency of the Year Runner Up:
VIA, Portland, Maine
To get to better know clients from around the country, VIA has been running a successful "Salon Series" where the CMOs of blue-chip companies are invited to discuss and debate issues of the day in an intimate setting. In the past year this event has translated into new-business opportunities for the shop from the likes of Samsung and others. At same time VIA hasn't lost sight of helping out the community, such as a breakthrough campaign it did for the Salvation Army last year.
Campaign of the Year Runner Up:
"Expense-a-Steak"
New York-based Walrus wins for its humorous "Expense-a-Steak" application, created for Maloney & Porcelli restaurant in New York.
International Agency of the Year:
Hot Tomali, Vancouver, British Columbia
This shop won for the notable campaign it created for Telecommunications Workers Union, where it drove a national "unemployment clock" across Canada that snagged $1 million in media exposure for the client and earning it a permanent home in Vancouver.

Agency of the Year in the 1-to-10-employee category: Sub Rosa, New York. To maximize the power of their creative work, this lean agency pulled together a group of collaborators and smart thinkers from Google, the MIT Media Lab and the TED Conference, who aided in the conception of groundbreaking ideas for SubRosa's coveted client list which includes Absolut Vodka and Levi's.

Runner up in the 1-to-10 employee category: Hot Tomali. Hot Tomali not only took the international crown, but it was also the runner up for agency with 1 to 10 employees.

Agency of the Year in the 11-to-75-employee category: Mono, Minneapolis, for believing that simpler is better. Its belief in no department heads, no hierarchy or separation between strategy and creative, design and advertising, or between traditional and digital media has led to great work for clients such as Mr. . Meyers Clean Day, EMD Serono and Blu Dot.

Runner up in the 11-to-75 employee category: Kyp. With offices in London and New York, this 48-person shop's clients include British Music Experience, Prezista and Verizon.

Agency of the Year in the 76-to-150-employee category: Biggs|Gilmore, Kalamazoo, Mich., for making old-school brands like Pop Tarts, Rice Krispies and Cottonelle hot topics in the digital and social-media realms. One of its notable campaigns was Cottonelle's Roll Poll, which asked the nation if it rolled toilet paper over or under.

Runner up in the 76-to-150-employee category: Partners Napier, in Rochester, New York The traditional ways of working aren't what this agency does. Instead, it has invented new methods of working with its client base -- which includes Kodak, Constellation Wines and Marlow's, a regional restaurant chain in Atlanta -- such as an in-house-outsourcing model and a custom studio for Constellation called Vine Design.

Southeast region winner: Hook, Charleston, S.C., for showing that there's no minimum-size requirement needed at agencies in order to produce great creativity. For one client the agency set up branded doggy bag dispensers around a new neighborhood sneaker shop because, as they say, "fancy shoes and dog poo just don't mix."

Northeast region winner: Night Agency, New York, for its work for clients like Dial Corp., Keds, Hanes and Champion; for the last it created the Champion Hoodie Remix campaign.

Midwest region winner: Preston Kelly, Minneapolis, for increasing donor-registry membership for the National Marrow Donor Program last year from 6 million to 8 million via a campaign called "Be the Match." It also helped the program boost website traffic by 184%.

Agency Culture of the Year: Squeaky Wheel Media, New York. This New York-based digital shop is the only one Ad Age has ever encountered that boasts both an in-house agency DJ and a CEO who cooks employees lunch every Friday. The agency, which is part minority-owned, was a standout for its fun approach to working while also proving just how much it values its employees. Despite the tough economy last year, it made it a point to provide generous bonuses to each of its 30 staffers.

Michael Bush
.
Follow View all articles by this author