Plus: Alphabet soup, fortune cookies and Planters' literal cliffhanger
READ THIS NEXT
Google search upgrades make it harder for websites to win traffic 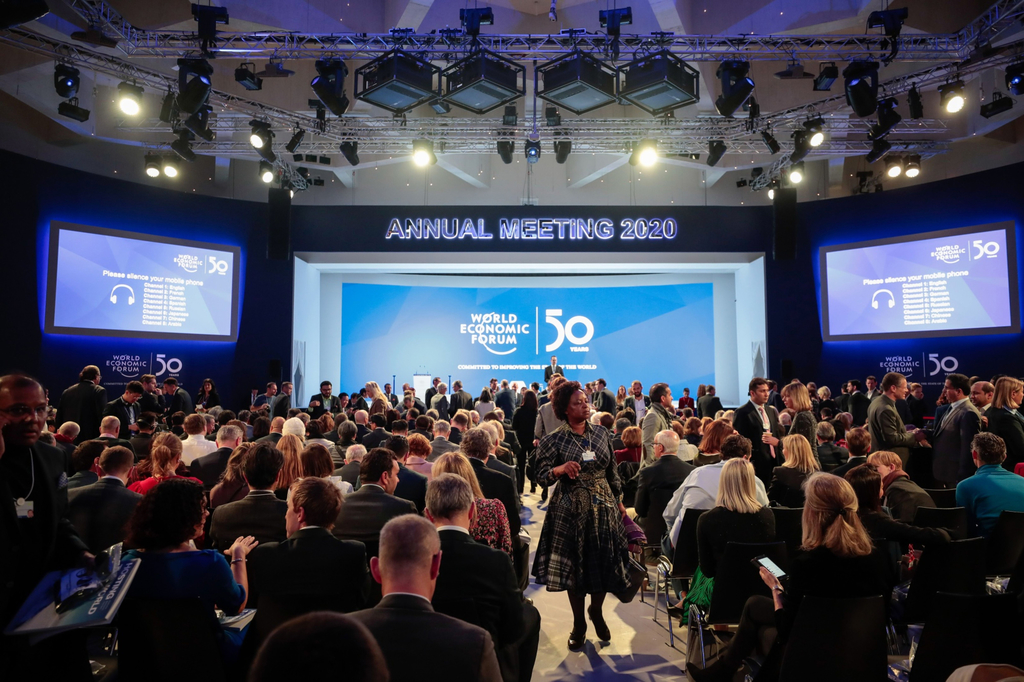 Attendees take their seats ahead of an address by U.S. President Donald Trump on the opening day of the World Economic Forum in Davos, Switzerland, on Tuesday.

Business leaders gathered at Davos this week were greeted with a disheartening survey from PwC that finds more than half of chief executive officers believe economic growth will slow this year. Just last year, optimism was at record levels. “At the time, 57 percent responded that gross domestic GDP growth would improve and only 29 percent expressed pessimism about future economic growth,” reports Yahoo Finance. “In 2020, only 22 percent of CEOs project there will be a rise in the rate of economic growth in 2020.” Said PwC Networks Chairman Bob Moritz about the survey of 1,600 CEOs in 82 countries: “Given the lingering uncertainty over trade tensions, geopolitical issues and the lack of agreement on how to deal with climate change, the drop in confidence in economic growth is not surprising—even if the scale of the change in mood is.”

Fear not, Snickers has it under control
“The world is out of sorts. We’ll fix it Super Bowl Sunday,” is the thrust of a teaser campaign from the Mars Wrigley brand. The spots, from BBDO New York and AMV BBDO, show people at construction sites with bulldozers digging huge holes. The idea seems to be that those holes will solve life’s annoyances, like people who insist on talking while their phones are on speaker, or sons who resist moving out of their parents’ homes. Can you dig it?

From soup...
Muhtayzik Hoffer is Muhtayzik Hoffer again. The San Francisco shop rebranded as M/H VVCP in October of 2018, two years after it was acquired by U.K. shop VCCP. But co-founder Matt Hoffherr now says the initials were too much of a mouthful. “We changed the name originally because we love our partnership with VCCP and thought M/H VCCP would be better for everyone," Hofherr told Lindsay Rittenhouse, “but clients kept calling us Muhtayzik Hoffer. It was a brand recognition thing.” The founders told Ad Age that the change, which was done quietly and without a formal announcement, is not reflective of any differences between the two shops. However, Hofherr says “it does kind of feel nice when prospects call us and we hear the name Muhtayzik Hoffer again versus alphabet soup.”

… to nuts
If you’re standing while reading this, better sit down. It appears Planters is killing off Mr. Peanut. The character’s Twitter profile has included a link to a “final spot,” which portrays his Nutmobile careening off the road. Mr. Peanut and two passengers hurtle over a cliff and end up clinging to a branch above a deep abyss before Mr. Peanut (gasp!) lets go. The spot ends with an epitaph: Mr. Peanut, 1916-2020. "No word yet on whether this is the official Super Bowl ad, and if so, if it was leaked intentionally," writes Jessica Wohl. "It could also be a teaser to the Super Bowl ad, meant to drum up attention." Folks, this is what you call a cliffhanger.

Podcast of the Day
“When I started three-and-a-half years ago, I felt the notion [it was for] stuffy, elegant, rich, rich people.” That’s Architectural Digest Editor-in-Chief Amy Astley, who joined our Ad Age Ad Lib podcast to explain how the 100-year-old magazine has broadened is audience by reinventing itself for a digital world. In Astley's time at Architectural Digest, writes Brian Braiker, “the magazine has seen its audience  grow 63 percent across print and digital; its social footprint has increased by 169 percent.” And, in case you are wondering, Astley has refused notable people who have asked to have their homes featured in the publication, but she declines to identify who “because I think there could be a hit on me. One is terrifying.”

Just briefly
More Super Bowl: Missy Elliott—who got her freak on in a cameo for a Mtn Dew Super Bowl ad in 2018—is back in the game this year for another PepsiCo brand, writes E.J. Schultz, appearing with H.E.R. in a 30-second spot for Pepsi Zero Sugar to promote its new matte black can.

They should have predicted this: Freeform is running a promotion for its new show, “Everything’s Gonna Be OK” by inserting that phrase into fortune cookies, writes Ethan Jakob Craft. When people open the cookies, they are greeted by messages like “Don’t get bangs. You’ll regret it. But everything’s gonna be OK.” Not everyone found it funny. The move took a few knocks on social media as people complained about ads infringing on diners’ desserts. We'll reserve comment other than to say don't get the bangs. Seriously.

A pressing opportunity: Jennifer Aniston’s Instagram photo of her slouched in the back seat of her ride to the Jan. 19 Screen Actors Guild Awards to avoid wrinkling her cream-colored satin gown has drawn 5.8 million likes and counting. So where was Downy WrinkleGuard? Seems like a perfect social media opportunity to answer the actress, whose caption read in part, "No wrinkles … harder than it looks!”

It got greenlit: Bloomberg News is introducing Bloomberg Green, a daily website, newsletter, magazine and podcast centered on the business, science and technology of climate change. Aaran Rutkoff, who formerly ran Hyperdrive, Bloomberg’s transportation-focused brand, is the franchise’s first editor. Founding partners include HP, Amazon and Tiffany & Co. The brand’s rollout includes Data Dash, an interactive dashboard that each day cites the most polluted city on Earth. Yesterday, that dubious honor went to Harbin, China.

Netflix feels the heat: It probably comes as no surprise that Netflix, which is facing stiff new competition from Disney Plus and Apple TV Plus, is seeing a slide in subscriber growth. The company reported 550,000 new U.S. and Canadian subscribers in the fourth quarter of last year, writes Garett Sloane, well below the 1.75 million U.S. subscribers it added in the comparable 2018 quarter.

Last but not least: How much time do people over age 15 spend watching TV? How much will ad spending grow this year? The answers to all that and lots more lie in the Ad Age Datacenter Marketing Fact Pack. Download your free (yes, we said free) copy here.