Taps Rockfish to Make Old-School Product Cool, Web Game May Be in the Cards
READ THIS NEXT
Walmart pulls guns off shelves as precaution ahead of election

BATAVIA, Ohio (AdAge.com) -- For 143-year-old U.S. Playing Card, digital media might seem more the problem rather than the solution as consumers spend more time with digital games. But the leading player in playing cards, including the Bicycle, Aviator and Hoyle brands, has just named Rockfish Interactive, Cincinnati, its first digital agency of record, even though it doesn't have a traditional creative or media shop. 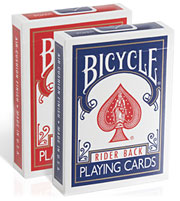 Rockfish Interactive is charged with creating digital and social-media marketing for the U.S. Playing Card brands.

Digital and social gaming are now the marketer's chief competition in a battle for "share of leisure," as USPC VP-General Manager Doug Kruep put it. USPC annually still sells 100 million decks of cards, 20 million of them to casinos, but the market is flat, Mr. Kruep said. Even poker, which rode a wave of popularity last decade and still occupies a large swath of the schedule on ESPN networks, has seen interest cool, he said.

So the subsidiary of Jarden Corp., based near Cincinnati in Erlanger, Ky., is following its consumers. "They may not be sitting in a room with four friends playing cards," he said, "but many are online playing cards."

Having only a digital agency, he said, "more than anything reflects efficiency of spend. We don't have a huge marketing budget. You have to pick your strategies and tactics."

He turned to Rockfish mainly to create digital and social-media marketing for the playing-card brands, Mr. Kruep said. But he's also hoping the agency's efforts to serve as an incubator for digital start-ups may help USPC build a digital-gaming business of its own.

"I wouldn't say there are concrete plans," he said, "but those are definitely conversations we've had."

Developing branded content to create new revenue streams isn't new for U.S. Playing Card, even if the digital format is. The company in 1920 launched a radio station, WSAI, from its headquarters in Norwood, Ohio, to promote card playing, particularly bridge. A "Bridge by Radio" instructional show helped Congress become a favorite brand among bridge players as the game gained popularity throughout the decade. The company in 1930 sold the AM station, which still operates.

For Rockfish, USPC is the first new national account won for the Cincinnati office since it opened last September, with staff that included Dave Knox, former brand manager for branded content at Procter & Gamble Co., as chief marketing officer. Rockfish also has four other offices in Arkansas, Texas and California.

"When you see the explosion of social games like Zynga's or in digital poker, Bicycle should be in that realm," Mr. Knox said. "They're really looking at whether there are new digital revenue streams that can be created."

Mr. Knox, while still at P&G, first met Mr. Kruep last year when both were working on Cincinnati's economic-development efforts to brand the region as a consumer-marketing hub.