Popeyes goes with its Gut and shopping gets aggressive: Wednesday Wake-Up Call 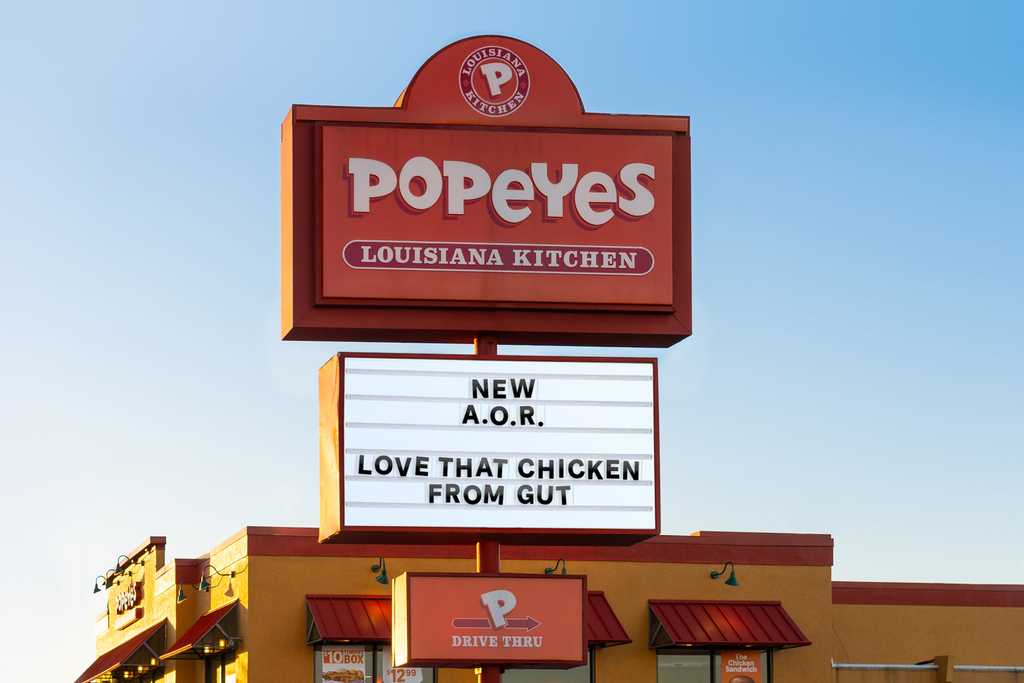 Was it super for you?

Biden may have won big, but as we all sort through the Morning After, the uncertainty continues—especially since Super Tuesday happened within the context of a global pandemic and stomach-turning market performance.

Really, the only one sure thing for the time being is that Mike Bloomberg is continuing to single-handedly save the media industry (TV, mostly) with his campaign ad spending. Ad Age Datacenter’s Kevin Brown sums up the latest data from Kantar/CMAG—Datacenter’s partner on our ongoing Campaign Ad Scorecard tallies—thusly: Nearly half of all media buys placed for presidential, senate, house and gubernatorial races combined were placed by Bloomberg. Of the $1.2 billion spent on TV, cable, radio, Facebook and Google, Bloomberg’s presidential campaign accounted for $561 million.

Popeyes goes with its Gut

Chicken chain Popeyes has named Miami’s Gut as its new creative agency of record, succeeding long-term agency GSD&M. It was Gut that created the “Sweet Dixie Kitchen” campaign that introduced the chicken sandwich that dominated headlines in August 2019, along with “Open Sunday,” that announced the product’s return in November. And who could forget the sandwich duct-taped to a wall in a nod to the Art Basel banana? What Gut didn’t create, however, was the “... y’all good?” response to Chick-fil-A on Twitter from GSD&M. But it is indeed all good: Popeyes U.S. same-store sales rose 13 percent last year, including a 37.9 percent jump in the fourth quarter, writes Jessica Wohl.

Snapchat is inviting advertisers into its ad network, a product it promised to deliver this year that lets brands extend their campaigns to partner apps. Business Insider reported that ad agencies have received a memo from Snapchat about testing the ad network called Snapchat Audience Network. It is similar to Facebook Audience Network, which uses the social network’s ad targeting and data to power ads outside of its own properties. Business Insider says brands may not have much confidence in the Snapchat network yet, at least not until they can have more control and transparency in understanding where their ads appear. Ad networks come with brand safety concerns, when advertisers don’t always know everywhere their messages pop up.

TikTok is the latest company to skip SXSW amid coronavirus concerns, joining Twitter, Facebook, Intel and Vevo in passing on the Austin, Texas festival. Even so, the event, slated to start March 13, continues to draw major speakers. “On Tuesday, the festival touted the addition of comedian and actor Kumail Nanjiani, Chris Evans of 'Captain America' fame, and journalist Tamron Hall. On Monday, the festival added Hillary Rodham Clinton,” writes Garett Sloane.

Separately, Fox News became the first media company to cancel its upfront in the wake of the coronavirus outbreak, writes Jeanine Poggi. The news behemoth had planned to host its annual pitch to the ad community in New York on March 24.

Plans for the summer Olympics, however, roll on, reports Anthony Crupi. “With just under five months to go until the Opening Ceremony, we have sold nearly 90 percent of our Tokyo Olympic inventory and the vast majority of our tent-pole sponsorships have been sold,” says Dan Lovinger, executive VP, ad sales NBC Sports. “We recently surpassed $1.25 billion in national advertising for Tokyo, which exceeds our sales total for Rio 2016 and is a new Olympic record.”

Meanwhile, “anxious consumers worried about the coronavirus and looking for hand sanitizer may want to consider a Target run,” writes Adrianne Pasquarelli. In its annual financial meeting on Tuesday, Target execs reported “a surge in store traffic and 'aggressive shopping,' as customers stock-up on disinfectants and food and beverage items.” The retailer posted fourth-quarter net sales of $23.1 billion, a 1.8 percent rise over the year-earlier period, and says it plans to focus on smaller stores and new brand partnerships.

Martinis not included: Greg Rogers, the head of visualization at WeWork, has crafted a 3D rendering of what “Mad Men’s” Don Draper's apartment would look like in an online video, writes Ilyse Liffreing.

A better I.D.: The Verge reports that Volkswagen has wisely thought better of naming its electric compact SUV the ID Crozz. The intent was to communicate “crossover,” but it kind of sounds like … well, we won’t go there.

Seesawing stock market got you down? You may want to consider parking your assets in a Bentley Mulliner Bacalar. The new model is priced at $2 million and the car’s interior trim is made from trees that fell 5,000 years ago, CNN reports. Only 12 of these cars are being made, but please keep it in a garage—the car has no roof.