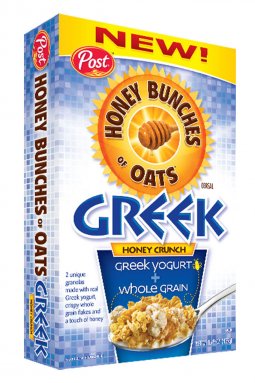 The story of how Post converted the concept into a promising product launch is a lesson in how food marketers must move quickly in an age of changing consumer tastes and rising retailer clout. Quite simply, when Target and Walmart say they are interested in your product pitch -- and they are reserving shelf space for it -- you better make it happen, and fast.

That's what Post experienced in August when it presented the cereal concept to the two retailers. They were so impressed that they wanted it on shelves by January to capitalize on the Greek-yogurt trend.

One problem: Post had yet to figure out how to produce mass quantities of dried Greek yogurt, which would be needed to mix into the brand's crunchy granola clusters. The retailers also wanted parts of the cereal to be coated in the yogurt to serve as a visual cue for consumers. "It was an all-out sprint to find somebody in this country who'd be willing to do this for us," said Mark Izzo, Post's VP-research, development and innovations. "Because we literally had the nation's biggest retailer and No. 2 retailer give us a slot to deliver this, and we didn't have the ingredient to do it yet. So we were looking under every stone."

The marketer had started looking for solutions soon after Honey Bunches of Oats Research and Development Director George Squire brainstormed the idea with a vendor over brews early last summer. Post wanted to use authentic Greek yogurt, which is creamier than regular yogurt. But vendors pushed back. "It cannot be done. ... You cannot dry Greek yogurt -- it's too thick," Mr. Izzo recalled being told. Also: "Greek yogurt is so hot right now that all the guys just selling refrigerated Greek yogurt are too busy to deal with anything else."

So Post looked to Europe for inspiration, where "fresh cheese" (also called baker's cheese) is made using the same method that U.S. makers of Greek yogurt employ. Because fresh cheese comes in a dry form, Post figured the same technique could be used to dry Greek yogurt.

The marketer eventually found a dairy to give it a shot that Mr. Izzo identified it only as being "in the South somewhere." While Post R&D tinkered, the marketer's design team got cracking, creating packaging even before the cereal was finalized. Everyone had a deadline to beat: Boxes had to be sent to retailers by Christmas. The time crunch caused Post to wait until much later than normal to begin consumer-product testing, meaning that it might have to change the cereal after it was in stores. "Luckily, the product tested very well," Mr. Izzo said.

Retailers didn't get their first plant-made samples until November. The first box did not roll off the assembly line of Post's Jonesboro, Ark., plant until early December, which it cranked around the clock to meet demand. "We had to do major rearranging of [the] production schedule."

The ambitious line extension comes after Honey Bunches of Oats, the third-largest cereal brand in the U.S. with 4.16% share, suffered a bit of a setback in the 52 weeks ending Dec. 30. Market share fell 0.41 points, as dollar sales dropped 8.68% to $398.7 million, according to SymphonyIRI.

Such innovations are a key part of the growth strategy for Post, which a year ago spun off from parent company Ralcorp. The Greek rollout is a major test for a company that is positioning itself as an entrepreneurial, nimble competitor to Kellogg and General Mills.

The early returns look good. Post says the cereal in just four weeks reached distribution of 48% of all grocery and mass retail stores nationwide, including every Walmart. That, Mr. Izzo said, is the fastest rollout in Post history.