Massive U.S. restaurant chains such as McDonald's, Burger King and KFC have thousands of thriving locations outside the U.S. But some smaller chains that have diminished or nearly disappeared in the U.S. also enjoy a robust presence abroad. Here we list a few chains you may remember -- or still see stateside -- that are flourishing overseas. 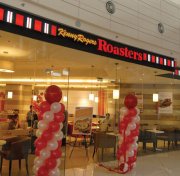 "The Gambler" singer Kenny Rogers in 1991 linked with former Kentucky Gov. (and KFC owner) John Y. Brown to found Kenny Rogers Roasters. But true to his lyric, Mr. Rogers knew when to fold "em: In 1998, the company filed for bankruptcy. Nathan's Famous bought the ill-fated Kenny Rogers Roasters and in 2008 sold the entire chain to its Asian franchiser, Berjaya Group, for $4 million. That turned out to be a rather savvy deal. Total revenue for the last fiscal year was over $100 million, according to a recent Time article. There are roughly 140 locations in Asia, including in Malaysia and the Philippines, as well a handful of locations in Beijing. The chain is slated to begin opening stores in China in September. Stateside, Mr. Rogers' chicken run hasn't been nearly as successful: A single outlet still stands in the U.S., in Ontario, Calif.

Founded in 1979 by Ed and Gloria Jean Kvetko outside of Chicago, Gloria Jean's Coffees in the mid-'80s began franchising stores. At the end of 2010, the company still operated about 87 U.S. locations, many mall-based, but what's impressive is its international presence: It now has more than 900 stores -- roughly 460 of them in Australia -- in 35 countries including Cambodia, Kuwait, Pakistan, Turkey and Singapore. 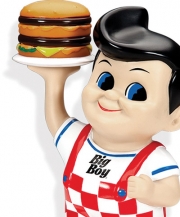 Well-known for its mascot -- a chubby boy in red-and-white checkered overalls -- Bob's Big Boy was founded by Bob Wian as a hamburger stand in 1936 in Glendale, Calif. Mr. Wian expanded the chain through a franchise agreement that gave franchisees flexibility to customize their restaurants -- even the name. Among some of franchisees were Dave Frisch, whose Frisch's Big Boy became a separate company, and Alex Schoenbaum of Shoney's. Mr. Wian in 1967 sold the chain, which by then had about 600 units, to Marriott Corp.

Big Boy reportedly struggled under Marriott. Elias Brothers Corp., a franchisee at the time, bought the rights to Big Boy in 1987, but in 2000 the chain filed for bankruptcy.

Post-bankruptcy, the chain overhauled restaurant designs and menu items, and still operates about 137 locations in the U.S., according to Big Boy's website, mostly in Michigan, where the company is headquartered, and in the Los Angeles area. But its heftiest presence is in Japan, where operations are helmed by Zensho Group, with nearly 265 locations.

Founded in 1972 in North Miami by the restaurant's eponymous founder, Tony Roma's was just one location until Texas financier and Dallas cowboys owner Clint Murchison Jr. in 1976 bought the majority of the U.S. franchise rights and formed a jointly owned company, Roma Corp. The chain opened its first franchised location in Japan in 1979, and followed with its first domestic franchise in Beverly Hills, Calif., in 1982. The chain, while never amassing a huge presence in the U.S., is known for its baby-back ribs, and now has more than 200 locations in 17 states and 33 countries. About 75% of the locations are outside the U.S., including units in Aruba, Peru, Chile, the Dominican Republic, Guam, Ecuador, Singapore, Thailand, Germany, Bahrain and more.